High Tension on the High Seas. A Vietnamese officer keeps an eye on a Chinese coast guard vessel (Reuters) Last week a group of Philippine troops joined their Vietnamese counterparts on a sandy isle in the South China Sea to drink beer, eat food, play sports and enjoy cultural performances. 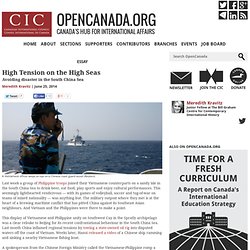 This seemingly lighthearted rendezvous — with its games of volleyball, soccer and tug-of-war on teams of mixed nationality — was anything but. The military outpost where they met is at the heart of a brewing maritime conflict that has pitted China against its Southeast Asian neighbours. And Vietnam and the Philippines were there to make a point. This display of Vietnamese and Philippine unity on Southwest Cay in the Spratly archipelago was a clear rebuke to Beijing for its recent confrontational behaviour in the South China Sea. It also points to something that often goes unremarked in discussions on the South China Sea dispute, particularly those that tend to frame the issue as a simple conflict over resources. 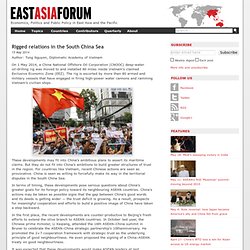 The rig is escorted by more than 80 armed and military vessels that have engaged in firing high-power water cannons and ramming Vietnam’s civilian ships. China denies U.S.-Japan alliance's Diaoyu Islands bearing. BEIJING, April 23 (Xinhua) -- The US-Japan alliance, a bilateral arrangement made in the Cold War, should not undermine China's territorial sovereignty and legitimate rights, a Chinese spokesman said on Wednesday. 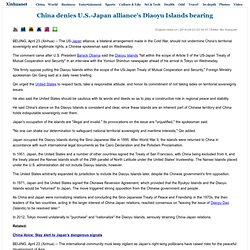 The comment came after U.S. President Barack Obama said the Diaoyu Islands "fall within the scope of Article 5 of the US-Japan Treaty of Mutual Cooperation and Security" in an interview with the Yomiuri Shimbun newspaper ahead of his arrival in Tokyo on Wednesday. "We firmly oppose putting the Diaoyu Islands within the scope of the US-Japan Treaty of Mutual Cooperation and Security," Foreign Ministry spokesman Qin Gang said at a daily news briefing. Qin urged the United States to respect facts, take a responsible attitude, and honor its commitment of not taking sides on territorial sovereignty issues. He also said the United States should be cautious with its words and deeds so as to play a constructive role in regional peace and stability. China’s emerging undersea capability and the implications for Australia’s future submarine. At ASPI’s recent Submarine Conference the strategic rationale for Australia’s Future Submarine (FSM) was only lightly discussed. 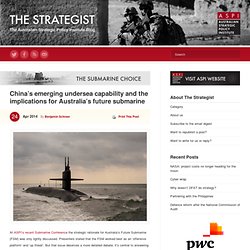 Presenters stated that the FSM worked best as an ‘offensive platform’ and ‘up threat’. But that issue deserves a more detailed debate: it’s central to answering the question about what we want the submarines to do. A hidden assumption of the 2009 Defence White Paper, which provided the vision for 12 new and large diesel-electric submarines, was that the boats would be able to operate for extended periods as far away as Northeast Asia, including off the Chinese mainland. Some analysts, including here on The Strategist, support such a view. But the future undersea environment off the Chinese coast will be markedly different from what it is today. Obama pledges Japan islands support as Asian tour begins. 23 April 2014Last updated at 10:11 ET Barack Obama was the first US president to visit Japan in 18 years US President Barack Obama has assured Japan that islands at the centre of its territorial dispute with China are covered by a bilateral defence treaty. 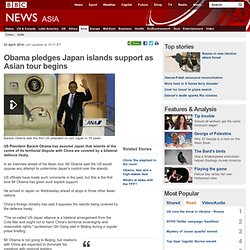 In an interview ahead of his Asian tour, Mr Obama said the US would oppose any attempt to undermine Japan's control over the islands. US officials have made such comments in the past, but this is the first time Mr Obama has given such explicit support. Why Beijing shouldn’t worry about Manila’s military upgrades. Author: Joseph Franco, RSIS On 28 March 2014 Manila signed a US$420 million contract for the delivery of 12 Korean Aerospace Industries FA-50 aircraft for light surface attack and lead-in fighter roles. 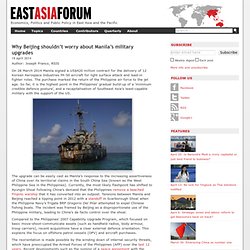 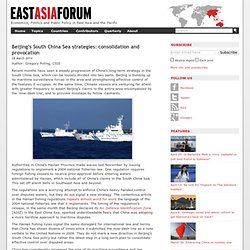 Beijing is building up its maritime surveillance forces in the area and strengthening effective control of the features it occupies. At the same time, Chinese vessels are venturing far afield with greater frequency to assert Beijing’s claims to the entire area encompassed by the ‘nine-dash line’, and to provoke missteps by fellow claimants. Is China preparing for a ‘short, sharp war’ against Japan? Authors: Jonathan D. 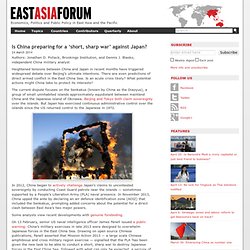 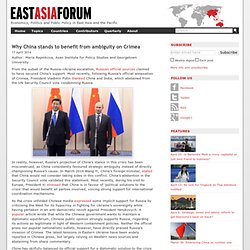 Most recently, following Russia’s official annexation of Crimea, President Vladimir Putin thanked China and India, which abstained from the UN Security Council vote condemning Russia. In reality, however, Russia’s projection of China’s stance in this crisis has been misconstrued, as China consistently favoured strategic ambiguity instead of directly championing Russia’s cause. In March 2014 Wang Yi, China’s foreign minister, stated that China would not consider taking sides in this conflict.