Primary sources are a great way to get good reliable facts and stories. You can count on the words not being twisted and made into something else. These five right here got chosen because they genuinely made me emotional and connected with me on a very deep way.

Some of these stories right here can really make you in you're feelings and feeling down. What I learned from these right here is racism can happen at any time and you never know what you will do when that happens. These five right here speak so loud because it is coming directly from another human and can touch you so deaply. Why I will never forget the day I was racially abused in front of my young son. Posted about 5 hours agoSun 26 Jan 2020, 8:34pm It was October 26 last year when out of nowhere came a racial attack I will never forget. My six-year-old son Archie, who has autism, and I were at his favourite public swimming pool — his safe place, his happy place. Charlestown pool is a place where he can shriek and giggle like nobody is watching and splash around before smiling with his whole body. But all was not well at his safe and happy place on this Saturday afternoon.

As Archie and I dipped our toes into the smaller of two pools, two boys pointed in our direction and whispered. "I thought this whole pool was for upper-class people only," one of the boys said. They were barely teenagers and appeared to be brothers. They pointed again. "Bantu Kaffir, Bantu kaffir," they whispered loudly. Under the now-defunct apartheid regime in South Africa, people were classified as either Bantu (all black Africans), coloured or white. The boys didn't stop there. "What is that? " "Mummy's sad," he said. I was racially abused - then my school tried to suspend me. John Fashanu talks about childhood racist abuse on Celebrity SAS. Former England international John Fashanu has recounted the “heavy” racial abuse he and his late brother Justin faced growing up in Norwich. 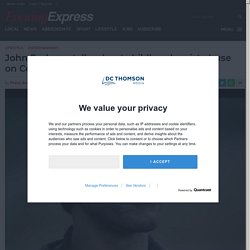 The former footballer, best known for his eight-year stint at Wimbledon when he won the FA Cup in 1988 and scored more than 100 goals in all competitions, was speaking during his stint on Channel 4’s Celebrity SAS: Who Dares Wins. The 57-year-old is one of the 12-strong line-up of famous faces being put through their paces by chief instructor Ant Middleton and his directing staff to see if they have what it takes to pass SAS selection. Fashanu faced an interrogation session from the directing staff after he was unable to control his aggression while tackling Rudimental’s Locksmith (real name Leon Rolle) in a task called Murderball, which saw the teams fight for possession of a tyre and drive it across the opposing team’s goal line. Asked about the day’s events, he said: “You know, I let myself down. “Everybody in the room spat in your Coke”: black celebrities tell their first experience with racism.

When was the first time you realized your race matters in terms of how people treat you? 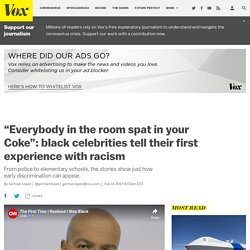 That was the question CNN posed to several black celebrities. The stories vary dramatically, from encounters with police officers to interactions during elementary school sports. Here are some of the stories: Jason George, actor: “I remember being at school, fifth grade, playing football with a bunch of the kids. In elementary school at least, I was one of the bigger kids. Check out the full stories in the video above or at CNN’s website. The stories are heartbreaking, reflecting on the kind of racism that black Americans face in their day-to-day lives. Studies find persistent signs of racism in the US In the same study, researchers interviewed 264 mostly white, female college students and found that they tended to perceive black children ages 10 and older as “significantly less innocent” than their white counterparts. This is just a small sampling of the research. Watch: The myth of race, debunked. Primary Source: Thomas Jefferson’s Racism, 1788.

American racism spread during the first decades after the American Revolution. 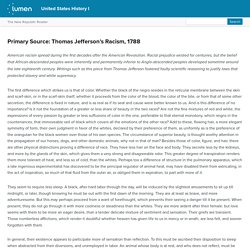 Racial prejudice existed for centuries, but the belief that African-descended peoples were inherently and permanently inferior to Anglo-descended peoples developed sometime around the late eighteenth century. Writings such as this piece from Thomas Jefferson fostered faulty scientific reasoning to justify laws that protected slavery and white supremacy. The first difference which strikes us is that of color. Whether the black of the negro resides in the reticular membrane between the skin and scarf-skin, or in the scarf-skin itself; whether it proceeds from the color of the blood, the color of the bile, or from that of some other secretion, the difference is fixed in nature, and is as real as if its seat and cause were better known to us. And is this difference of no importance? They seem to require less sleep. In general, their existence appears to participate more of sensation than reflection.