Hi There! I am Patrick Baldry from Canberra. Perusing MBA in Business and Finance Form University of Canberra. I like blogging and content marketing, as well. I usually write my blog about the current affairs, major upgrades and business opportunities in the city in various sectors. Canberra. If you all people want to aware of all the related things, then you can explore my profile.

Canberramoves. Want to Stop Australia’s Fires? Listen to Aboriginal People. The severity of these fires have shown us a reality that was previously unimaginable. 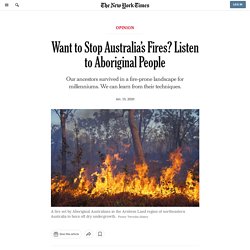 A fiery twister formed in the fires on Kangaroo Island. A fireman, Samuel McPaul, was killed when his truck flipped over in a fire tornado in Jingellic, New South Wales. Four thousand people huddled on the beach in the coastal town of Mallacoota as a wall of fire approached them; they had to be rescued by the Australian Navy. Matthew Deeth, the mayor of Wollondilly, New South Wales, summed up the devastation. In some areas there was “literally nothing left,” he said just before Christmas, “apart from a few burnt sticks in the ground.”

We are only beginning to understand the fires’ disastrous consequences. Australia remains caught in the nightmarish spell cast by these fires. Many people are starting to ask the right questions about climate change. Aboriginal people are the caretakers of this ancient land. This terrible disaster has forced us to imagine our way in unimaginable times. Australians need a 'slip slop slap'-style campaign to learn about air pollution. Unprecedented bushfires have sparked health concerns for Australia’s most vulnerable populations, but proper education and adequate policies may help the public to cope better, according to the Public Health Association of Australia. 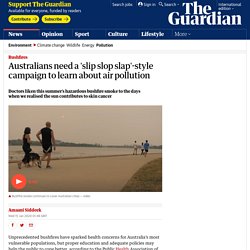 People such as children under the age of 14, those over the age of 65, pregnant women and individuals with pre-existing respiratory issues are at the highest risk during periods of poor air quality. “It seems that we’ve reached a point where we have to navigate air quality like we’ve never been forced to before, and I liken it to the days when we realised the level of UV rays from the sun contribute to skin cancer,” said Terry Slevin, the CEO of PHAA. Public Health Association Australia (@_PHAA_)Australians are having to become air-quality smart. Like learning about UV, the sun and its effect on skin cancer, we’ll need to adapt to the new world where clear unpolluted air can't be taken for granted. 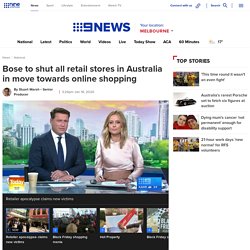 The American-owned and operated audio company today confirmed it would be shutting 119 physical retail stores across Australia, Europe, Japan and North America. Employees at these stores will lose their jobs, with Bose saying "outplacement assistance" and "severance" will be offered. "Additional details, including the number of employees affected, will remain private," Bose said in a global statement. 9News has contacted Bose Australia for a specific number of stores, and understands at least eight local locations have been earmarked to close.

The audio giant will keep 130 stores open in Greater China and the United Arab Emirates, as well as additional stores in India, Southeast Asia and South Korea. Bose has cited the "dramatic shift to online shopping" as the primary driver for the closure of brick and mortar stores. Overqualified migrants present a $6 billion opportunity for Australia's economy, study shows.

Posted about 11 hours agoWed 15 Jan 2020, 10:19pm Qusay Al-Turkey was a distinguished archaeologist, author, university professor and media commentator back in his home country of Iraq, before moving to Perth in 2017. 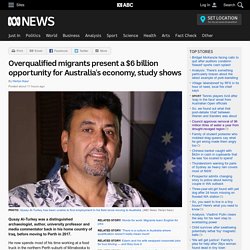 Key points: Migrants from non-English-speaking backgrounds face hurdles gaining workResearchers say migrant workers could add $6 billion to the economyEmployers looking for skilled workers have been urged to give migrants a chance He now spends most of his time working at a food truck in the northern Perth suburb of Mirrabooka to earn an income. Occasionally he also does casual relief work in schools teaching Arabic.

He has 22 years of experience under his belt, but despite applying for between 50 and 100 jobs, Dr Al-Turkey has struggled to secure a stable position in his field. "I applied many, many times for a job in my major as a teacher, but I think it's very difficult to find a job in a university," he said. TikTok not approved for use on Australia's Defence devices - Science News - ABC News. The #army hashtag on TikTok may have over 11 billion views, but the Australian Defence Department is still not a fan. 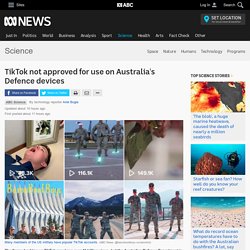 Key points: The Chinese app TikTok is not approved on Defence devicesThis follows a similar military ban in the United StatesPoliticians are concerned about the app's data security, among other issues The popular Chinese smartphone app is not allowed on Australian Defence devices, following a similar ban by US military forces. TikTok is not used nor has it been whitelisted, according to a Department of Defence spokesperson. The Pentagon also now discourages personnel from having the app, even on their personal smartphones. Owned by the Chinese technology giant ByteDance, TikTok allows users to make short video clips, often set to music.

For example, in 2019 a quartet of Finnish Navy sailors got millions of views for their video impersonating Mickey Mouse onboard a vessel, and compilation videos of the best military TikTok continue to appear on YouTube. Key points: Key points: