Budj Bim Cultural Landscape fire reveals new sections of ancient aquatic system. Updated yesterday at 2:15amSun 19 Jan 2020, 2:15am Extra sections of an ancient aquaculture system built by Indigenous people in south-west Victoria thousands of years ago have been discovered after a fire swept through the area over the past few weeks. 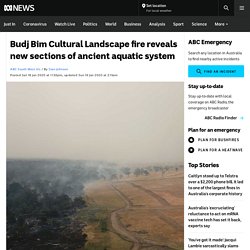 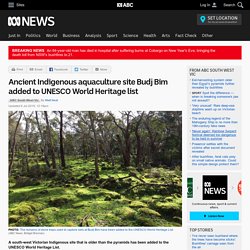 Key points: A 6,600-year-old Indigenous aquaculture site in Victoria has been added to the World Heritage ListOlder than the pyramids, the site proves that Indigenous people were agriculturally inclinedThe listing ends a 17-year campaign for recognition and is expected to boost tourism in the area After more than a decade of hard work and lobbying, the Budj Bim Cultural Landscape near Portland was accepted onto the list at a meeting in Baku, Azerbaijan on the weekend. The site was created about 6,600 years ago by the Gunditjmara people, who used stones to build an elaborate series of channels and pools to harvest eels from Lake Condah. There is also evidence at the site of stone dwellings, and trees that may have been used to smoke or preserve the eels that were caught. 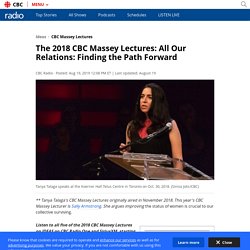 This year's CBC Massey Lecturer is Sally Armstrong. She argues improving the status of women is crucial to our collective surviving. Listen to all five of the 2018 CBC Massey Lectures on IDEAS on CBC Radio One and SiriusXM, starting at 9:00 p.m. (9:30 p.m. NT) on July 29, August 5, 12, 19, and 26. In her 2018 CBC Massey Lectures series, titled All Our Relations: Finding the Path Forward, prize-winning journalist Tanya Talaga (author of Seven Fallen Feathers) explores the legacy of cultural genocide against Indigenous peoples. For Talaga, that cultural genocide has led to a forced disconnection from land and language by Indigenous peoples. Many communities, in Canada and abroad, are finding that the road back to a relationship with land and language are keys to community healing — to what, in fact, it means to be Indigenous. These are lectures about values for our times, and for all of us. And the answer?

Stone Houses Have Just Been Found Off the Coast of Australia - and They’re 9,000 Years Old. Archaeologists working on the Dampier Archipelago, just off the West Australian coast, have found evidence of stone houses dated to shortly after the last ice age, between 8,000 and 9,000 years ago - making them the oldest houses in Australia. 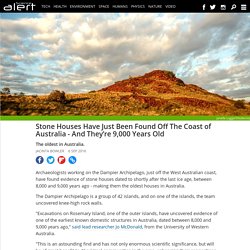 The Dampier Archipelago is a group of 42 islands, and on one of the islands, the team uncovered knee-high rock walls. "Excavations on Rosemary Island, one of the outer islands, have uncovered evidence of one of the earliest known domestic structures in Australia, dated between 8,000 and 9,000 years ago," said lead researcher Jo McDonald, from the University of Western Australia. "This is an astounding find and has not only enormous scientific significance, but will be of great benefit to Aboriginal communities in the area, enhancing their connections to their deep past and cultural heritage. " The researchers suggest that the structures’ inhabitants used branches or other plant material to make the roofs. World-first genome study reveals rich history of Aboriginal Australians. The most comprehensive genomic study of Indigenous Australians to date has revealed modern humans are all descendants of a single wave of migrants who left Africa about 72,000 years ago. 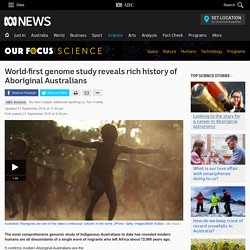 Key points Key points Aboriginal and Papuan ancestors left Africa around 72,000 years agoArrived on supercontinent 'Sahul' around 50,000 years agoBy 31,000 years ago, most Aboriginal communities were genetically isolated from each other, giving rise to great genetic diversity It confirms modern Aboriginal Australians are the descendants of the first people to inhabit Australia — a claim that has previously been the subject of debate. And the genetic information also shows Aboriginal people living in desert conditions may have developed unique biological adaptations to survive the arid conditions.

The findings are contained in one of three papers published today in Nature that look at the dispersal of modern humans from our evolutionary birthplace in Africa to Europe, Asia and Oceania. Mining firm desecrated Australia Aboriginal site. A mining company has been convicted of desecrating an Aboriginal site in Australia's Northern Territory. 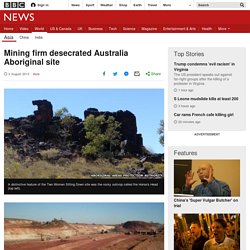 Mining firm OM Manganese was found guilty on Friday - the first time a company has been successfully prosecuted in Australia for desecration of a sacred site. The site is known as Two Women Sitting Down and is at Bootu Creek, north of Tennant Creek. OM Manganese was fined A$150,000 ($134,000; £88,000). Peter Toth, CEO of OM Holdings, which owns OM Manganese, said: "The company never intended to harm, damage or disrespect the sacred site. " "We sincerely regret the damage and the hurt caused and I unreservedly apologise to the site's custodians and traditional owners," he said. Two Women Sitting Down is associated with Australia's Kunapa people.