Australia's Bushfire Crisis. What you can do People around the world have responded to this terrible tragedy with an outpouring of support. 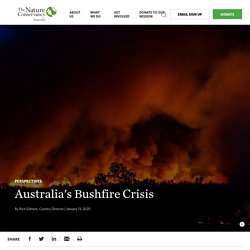 Please join our caring, passionate supporters — Make the most generous donation you can. Your generous gift will help support long-term conservation efforts so the forests can heal, threatened species can recover, and people and nature can thrive. What The Nature Conservancy is doing We welcome the Commonwealth government’s announcement of $50 million for immediate wildlife and habitat recovery. I've met with Government officials and other organisations in Canberra to discuss the next phase of the recovery. Your donation will help support our focused efforts to: Identify, manage and protect critical unburnt habitats. And critically, we will redouble our efforts to tackle the climate crisis, including advocating for stronger policies to accelerate the pace and scale of climate action. Thank you for your ongoing support and interest in protecting Australian nature.

A public health response to the Australian bushfire crisis. News, latest-news, When the final cost of this disastrous and unprecedented season of bushfires is counted, their impact on the physical and mental health of millions of Australians will be known. 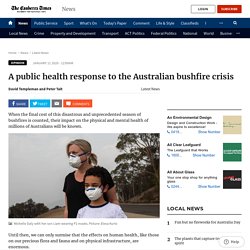 Until then, we can only surmise that the effects on human health, like those on our precious flora and fauna and on physical infrastructure, are enormous. The effects of the bushfires on health include breathing and heart problems, due to prolonged exposure to smoke, and anxiety and other mood disorders, related to the trauma and dislocation directly associated with the fires. It is likely that there will be other health effects. The severity of these health effects varies from premature death to less severe health outcomes, including hospitalisations and simply feeling unwell. After a bushfire, the impact on communities' mental health can last for years, as Yarloop knows too well. Updated 14 Jan 2020, 12:11amTue 14 Jan 2020, 12:11am It has been four years since a bushfire all but destroyed the small town of Yarloop in WA's South West, yet for those who lived through it, the psychological trauma remains long after the physical scars faded from the land. 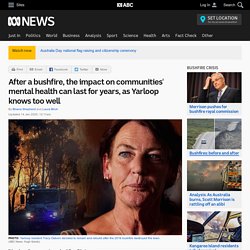 Tracy Osborn is a volunteer firefighter who returned from battling a fire front on that fateful day to find her home destroyed and her town ablaze. "I don't have any nightmares or visions in my head that keep me awake at night like a lot of the other volunteers I know do," she said. "But I'm finding now, particularly in the last year, it's just sort of hitting home to me, the enormity of it. "I'm just starting to realise my neighbour is never coming home. "I'm going to get new neighbours one day, and that's great, but they're not my old neighbour, I miss him terribly. "Just so much has changed. " Psychologist Elizabeth Newnham specialises in disaster-related trauma and said what Ms Osborn was dealing with was not uncommon. 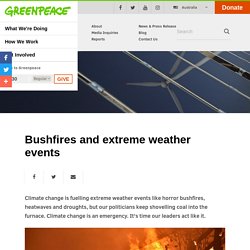 While it doesn’t directly trigger bushfires, it does make them worse. Factors that contribute to bushfire risk include temperature, dryness, wind speed, slope of the land, and humidity — all of which are aggravated by climate change. In 2019, the southern half of Australia experienced the driest January to August period on record. Since 2017, New South Wales has seen one of the worst droughts ever recorded for the state. Australians have felt and continue to feel the devastating impacts of bushfires driven by these climate change-induced conditions. Bushfire information. Australian bushfires: Why 2019 fire season is different from others.

The massive bushfires sweeping across the country have shocked Australians in their size and ferociousness. 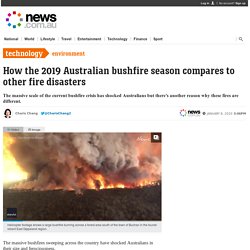 Since the start of the 2019 fire season, a staggering 10 million hectares has been burned, with all states and territories impacted except the ACT. To put this into perspective, in NSW alone, almost 5 million hectares have been burned, which covers an area larger than the Netherlands. In total, the area burned is almost the size of England, which is 13 million hectares. Australia’s mega fires have also left others in the shade. The Amazon fires, which left the world reeling in August last year, saw about 900,000 hectares burned. The California fires in 2018 claimed about 800,000 hectares. Emeritus Professor Stephen J Pyne of Arizona State University is an expert on the history of fire as well as a former firefighter in the US, and has written a book about Australia called Burning Bush: A Fire History of Australia. The 2009 Black Saturday fires claimed the most lives, with 173 people.