Stories of the First Fleet. First Contacts. But where is the green sheep? Old maps put the art in cartography. The national library's Trove digital service has been highlighting quirky old maps of the continent, starting with a 1920s graphic dividing the country up into the sheep haves and have-nots. 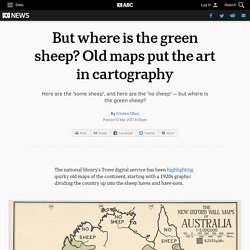 Artist Judy Horacek, who illustrated Mem Fox's children's classic Where is the Green Sheep? , approved of the idea. For the record, Meat and Livestock Australia has this more modern take on the old sheep map, which is impressively precise — who knew there were only 167 head of sheep in the Northern Territory? — but not as charming. The sheep map was such a hit, Trove has been pointing out other old maps of Australia in their collection of more than 600,000. 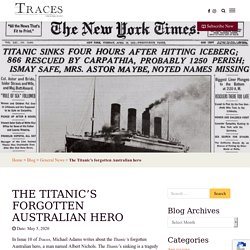 The Titanic’s sinking is a tragedy that has been immortalised in countless books and movies – but Albert Nichols’ heroic role has been vastly overlooked. Albert was born in July 1864 on Lord Howe Island, to Thomas Nichols, a whaling captain from Hobart, and Mary Nichols, the only daughter of two of the island’s pioneers. He ran away from home after a violent falling-out with his parents and became a seaman. By 1907, he was married with three children and lived in Southampton. He became known as the White Star Line’s best boatswain, filling this position on its biggest ocean liners and eventually ended up working on the RMS Titanic. As the boatswain, Albert was in charge of all deck operations and commanded about 30 seamen.

On a ship that only had lifeboat capacity for 1178 people (half the people on board), Albert must have known that his survival chances were slim. Cities and Memory - global sound map, field recording and sound art. » Dr Mathew Anderson: Surgeon & Local Politician. Anderson Fountain, Prince Alfred Park, Parramatta, ca. 1940s – 1950sSource: Local Studies Photographic Collection, LSP00355 Mathew Anderson (ca. 1790-1850): ‘Dr Anderson’, wrote Mrs Elizabeth Macarthur, ’was related to the Percy family of the Duke of Northumberland’. 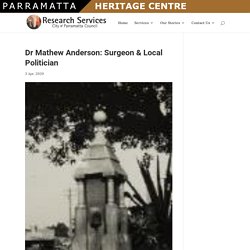 At some time he trained at the College of Surgeons at Edinburgh, and then entered the Royal Navy in 1809 and was appointed surgeon in 1814. He transferred to the Medical Service in Sydney in 1824 apparently when he arrived on the Castle Forbes in 15 January 1824.[1] When Mathew Anderson was posted to Parramatta in 1827 as an Assistant Colonial Surgeon in charge of the relatively newly built hospital to succeed Dr Allen, he was no stranger to the colony.He had first visited Australia as surgeon of several convict ship’s. His first voyage was on the Surrey (3), a 443 ton ship built at Harwich which left in late August 1818 from Sheerness. And some time later. Port Arthur archaeological dig to explore Tasmanian convict history. Archaeologists are digging up the site of former convict-era workshops next to the prison at the UNESCO World Heritage-listed Port Arthur Historic Site in Tasmania. 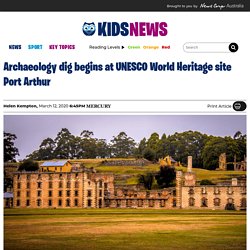 The dig, which started Thursday, is part of a project between the Port Arthur Historic Site Management Authority (PAHSMA) and Dr Richard Tuffin, Postdoctoral Research Fellow from the University of New England. “These workshops were integral* to the operation of the Port Arthur penal* station,” Dr Tuffin said. “Over the years since the site was given up as a penal station in 1877, there has been a lot of activity that has impacted the integrity* of the convict-period structures and deposits. “Everything from salvage to bushfires and the erection of new buildings have all had an impact.” The first stage of the project will involve the use of an excavator to carefully remove the upper layer of topsoil to expose the features and deposits beneath.

“After that, we use hand tools for the rest of the excavation,” Dr Tuffin said. 2. Bridging the Strait salutes forgotten aviation pioneer Arthur Long, 100 years on. Updated Wed at 7:54amWed 18 Sep 2019, 7:54am The first flight across Bass Strait took place 100 years ago this year and a new book aims to celebrate the seemingly forgotten pilot who met that challenge. 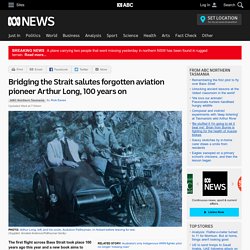 Bridging the Strait by Pirrie Shiel salutes World War I veteran Lieutenant Arthur Long, whose pioneering flight was in part motivated by a desire to win an impromptu Strait Race for Tasmania. It all happened quite suddenly — Long was in Launceston in December 1919 when he heard that a Victorian pilot was planning an attempt to fly to Tasmania. "He decided, 'No, a Tasmanian should do this first'," Ms Shiel said. "He took off from Launceston in his Boulton Paul biplane on December 15 and flew to Stanley, the closest point to Victoria. "There were such buffeting winds that it took him three and a half hours to get to Stanley. "Luckily, the next day it was suitable, so off he took. " Historic flight began at dawn From there, he hoped to see Airey's Inlet lighthouse on the Victorian coast.