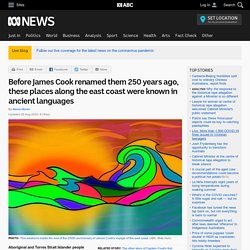 They were here before European sea navigators came to this land. Navigators such as Spaniard Luis Vaez de Torres, who in 1606 sailed through the Torres Strait Islands giving them the name they bear today, or Dutch explorer Willem Janszoon, who landed on the western side of Cape York Peninsula and charted its coastline in the same year. Or William Dampier, the first Englishman to set foot on Australia in 1688 and whose name is still honoured in Western Australia. An indigenous Australian perspective on Cook's arrival. Dr Shayne T. 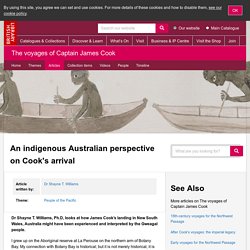 Williams, Ph.D, looks at how James Cook’s landing in New South Wales, Australia might have been experienced and interpreted by the Gweagal people. I grew up on the Aboriginal reserve at La Perouse on the northern arm of Botany Bay. My connection with Botany Bay is historical; but it is not merely historical, it is more importantly cultural. It is cultural because both my grandmothers were proud Dharawal women. A place of plenty. Using primary sources, we can investigate the diets of those on board the Endeavour and of the Gweagal people and find out what was on the menu for dinner in 1770. 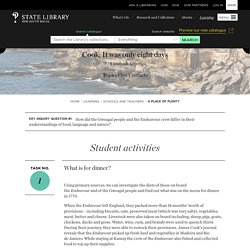 When the Endeavour left England, they packed more than 18 months’ worth of provisions – including biscuits, oats, preserved meat (which was very salty), vegetables, meat, butter and cheese. Livestock were also taken on board including, sheep, pigs, goats, chickens, ducks and geese. Water, wine, rum, and brandy were used to quench thirst. During their journey, they were able to restock their provisions. James Cook’s journal reveals that the Endeavour picked up fresh beef and vegetables in Madeira and Rio de Janiero. The journal of Peter Briscoe from 5 May 1770 reveals that he was involved in fishing: Employ’d wooding and watering and strikeing fish, string rays, of which Caught 300 lbs. one weighing 236 pounds servd. 5 lbs 1st man and stop’d the sea provisions. Violence on the shore. The Endeavour sailed into Kamay (Botany Bay) on 28 April 1770. 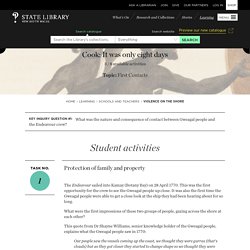 We saw them coming. The first sighting of the Australian mainland made by the crew of the Endeavour was the east coast of Victoria. 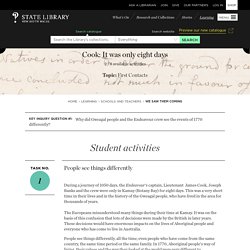 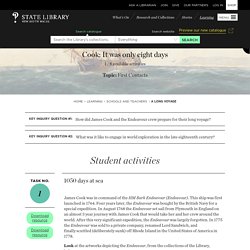 (Only men were allowed on these sorts of expeditions, typically.) 12 of these men were marines, or soldiers, there were scientific people and artists, and there was a large crew, who made sure the ship could sail. Perspective and power. All explorers used information from those who had explored far reaches of the world before them. 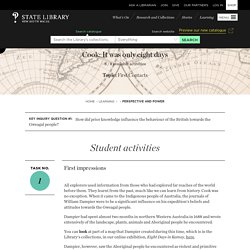 They learnt from the past, much like we can learn from history. Cook was no exception. When it came to the Indigenous people of Australia, the journals of William Dampier were to be a significant influence on his expedition’s beliefs and attitudes towards the Gweagal people. Dampier had spent almost two months in northern Western Australia in 1688 and wrote extensively of the landscape, plants, animals and Aboriginal people he encountered. 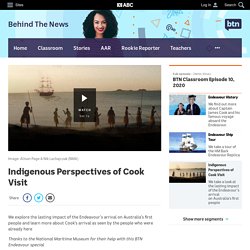 It's hard to imagine what it would have been like 250 years ago, watching as the Endeavour sailed into what we know today as Botany Bay. But over the years we've uncovered and learnt more about that first encounter between Australia's Indigenous people and Captain Cook and his crew. A lot of what we know comes from Cook's journals. We saw several people ashore four of whom were carrying a small boat or canoe which we imagined they were going to put into the water in order to come up to us but in this we were mistaken.

But there also stories that have been passed down by the first Australians who saw the Endeavour arrive. JACK: So Beau, what do we know about that first encounter? BEAU: Well I think these days we know a lot more. Dharawal elder recounts Captain Cook’s arrival in Australia 250 years ago. Early Indigenous accounts of Captain Cook paint a different picture to history - ABC News. In the early Sydney colony, newcomers commonly quizzed Indigenous locals about their memories of Captain Cook and the Endeavour. They believed the arrival of a shipload of British men who stayed for a week was an incredibly memorable event; and assumed that details of it would have been preserved — even treasured — over time. The accounts given are hardly ever a straightforward recounting of what Cook did. And they rarely tally with what is recorded in the voyage accounts.

Rather, they carry those common qualities of remembering: telescoping, conflating, rearranging time, stripping back detail, and upping symbolism and metaphor. Unpicking the threads of these memories is vital for historians wanting to find agreement on details and interpretations, and provenance of items that changed hands during early encounters. Recollecting memories Some oral accounts were written down — either at the time they were heard or later. One account comes from the early 1830s. Who is speaking? Who is speaking? Captain James Cook's landing and the Indigenous first words contested by Aboriginal leaders - ABC News.

The first sighting of James Cook's Endeavour, as remembered by the Yuin people of south-eastern Australia. Updated Sun at 2:36amSun 19 Apr 2020, 2:36am. 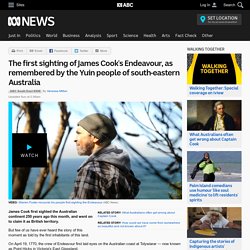 What Australians often get wrong about our most (in)famous explorer, Captain Cook. Posted Sun at 10:34pmSun 19 Apr 2020, 10:34pm With the 250th anniversary of Captain James Cook's voyage to Australia, it is time to brush up on the history of our nation's most famous naval explorer. Key points: Many European voyages had previously visited and mapped parts of AustraliaCook was not surprised to sail into view of what he called the "east coast of New Holland"Cook reported that he had "failed in discovering" an unknown southern continent. Captain Cook and the transit of Venus - 4,5 (History) NATHAN BAZLEY, REPORTER: It was an event that captured the interest and imagination of thousands of people young and old. 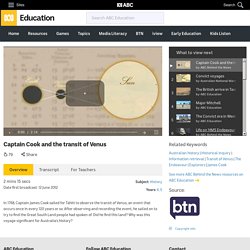 The chance to witness the rare moment when Venus crosses between the Earth and the Sun. For us, it's just an interesting sight. But back nearly 250 years ago, it was an opportunity. The year was 1768 and Captain James Cook was just setting sail from England on a special mission. Endeavour 250. Endeavour Ship Tour - Classroom - BTN. JUDITHE, NATIONAL MARITIME MUSEUM: So, this is the amazing Endeavour replica. Pretty much how it was in the 1800s, so we are actually feeling like the sailors would have felt up on the front of the ship, the bow. I like to give a clue. They had the 12 marines on board and then the rest were scientific people and of course the people to run the ship so, for example, the cook, the carpenter - very important, the sailmaker, as well as just ordinary sailors who kept the ship going.

In this game, you can explore the many achievements and actions undertaken by Cook and his crews across three incredible voyages in the Pacific. You will also discover a perspective “from the shore” through Larila, a proud pakana woman from Tasmania's north-east. – bpsweblinks

Life Aboard Ship - Australian National Maritime Museum. 250 years since Endeavour sailed past the Mid North Coast. Captain Cook was here ... 250 years ago - Breakfast - ABC Radio. HMB Endeavour's Voyage of Exploration - Programs - ABC TV Education - TV Education. Australia Since Cook - Classroom - BTN. On the 26th of January 1788 the First Fleet arrived in Sydney Cove. Captain Arthur Phillip raised a flag declaring possession of the land for the British Crown. Among the new arrivals were more than 700 convicts. The first of around 160 thousand who would eventually be sent to build penal colonies and endure harsh conditions to win a ticket home or a new life in a new land. Endeavour History - Classroom - BTN. HMB Endeavour's voyage of exploration - History,Science (4,5,6,9) The voyages of Captain James Cook. Search - ABC Education. Harvests and hazards in the seas. Dogs that hop along on two legs? The forgotten story of Tupaia, the star navigator who helped James Cook reach Australia.

HMB Endeavour Virtual Tour. Investigating National Treasures with Warren Brown. Watch the video clip on the Endeavour Journal and answer these questions about the National Treasure featured. What does this object help me understand about Australian history and heritage? Describe the object. Where is it located? What does the video clip tell you about: • why Cook was in the area • why his voyage was such an achievement • why this voyage is so important to Australia today. What was this book's main role in Australian history? Endeavour Journal - Indigenous Studies, History. 250 years since Captain Cook arrived in Australia, his legacy remains fraught. 30 Jan 1929 - Captain Cook's Cook.