Soil Erosion and Degradation. Soil is the earth’s fragile skin that anchors all life on Earth. It is comprised of countless species that create a dynamic and complex ecosystem and is among the most precious resources to humans. Increased demand for agriculture commodities generates incentives to convert forests and grasslands to farm fields and pastures. The transition to agriculture from natural vegetation often cannot hold onto the soil and many of these plants, such as coffee, cotton, palm oil, soybean and wheat, can actually increase soil erosion beyond the soil’s ability to maintain itself.

Half of the topsoil on the planet has been lost in the last 150 years. In addition to erosion, soil quality is affected by other aspects of agriculture. The effects of soil erosion go beyond the loss of fertile land. WWF's position on oil, gas and mining. Posted on 27 October 2012 Oil and gas, and other extractive industries, represent important development opportunities for the government and people of Madagascar and the Western Indian Ocean, as they do in East-Africa. 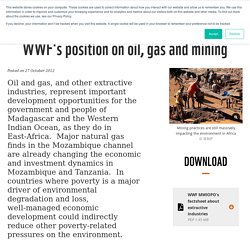 Major natural gas finds in the Mozambique channel are already changing the economic and investment dynamics in Mozambique and Tanzania. In countries where poverty is a major driver of environmental degradation and loss, well-managed economic development could indirectly reduce other poverty-related pressures on the environment. However, “well-managed” is not a given, as evident in numerous oil-rich countries where such oil and gas wealth has not generated sustainable an equitable development. Further, any oil and gas development also presents very serious direct environmental risks. Adani coal mine poses 'alarming' risk to sacred wetlands, traditional owners say.

Updated 1 May 2019, 6:20amWed 1 May 2019, 6:20am Traditional owners who are fighting the Adani mine in central Queensland say they welcome scientists' concerns about impacts on the Doongmabulla Springs but do not trust any government to ensure the miner protects their sacred wetlands. 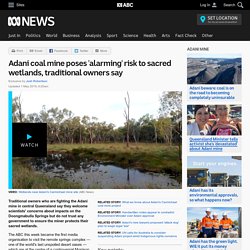 Key points: Traditional owners fighting Adani's mine say government scientists' concerns about their sacred wetlands are "alarming"The ABC is the first media organisation to visit the remote Doongmabulla Springs, which is at the centre of a controversial Federal Government decision that Labor could reviewAdani says it is bound to protect the springs but the Queensland Government says the company must prove the springs sources before the mine can proceed.

Illegal gold mining destroys wetland forest in Madagascar park. Over the last two years, small crews of miners using rudimentary hand tools have made repeated incursions into Ranomafana National Park in southeastern Madagascar, to dig hundreds of shallow pit mines.The wave of mining coincides with a steadily worsening security situation in the area, complicating attempts at enforcement and limiting researchers’ ability to quantify the problem.In a new paper, authors used satellite imagery to analyze changes in forest cover and drone photography to survey the wetlands in the heart of Ranomafana.The area affected is still relatively small, but experts fear the problem could easily become much worse. 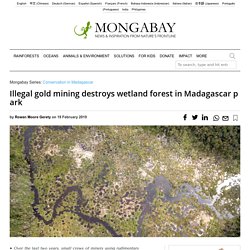 Illegal gold mining is on the verge of wiping out an iconic wetland forest in the heart of Madagascar’s flagship national park, according to a new paper. Sydney, Illawarra drinking water catchment under threat as mining takes toll on key wetlands. Updated Tue at 8:06amTue 17 Sep 2019, 8:06am Sydney's drinking water catchment is under threat from longwall mining operations, with research confirming upland swamps and streams are drying out. 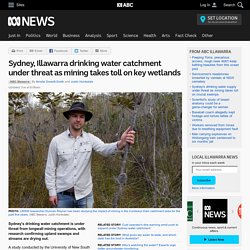 Key points: Research indicates longwall mining has been drying up NSW swamps that provide drinking waterMining company South32 plans to expand its operations in the Cordeaux Dam areaEnvironmental groups are calling for mining expansion in the area to be stopped A study conducted by the University of New South Wales has revealed that the impact of mining operations south of Sydney are becoming more widespread. 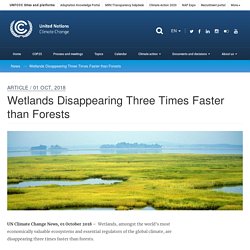 This is the key finding of the first-ever Global Wetland Outlook by the Ramsar Convention, a globally treaty ratified by 170 countries to protect wetlands and promote their wise use. “The Global Wetland Outlook is a wake-up call - not only on the steep rate of loss of the world’s wetlands but also on the critical services they provide. Threats to river health. Threats to rivers and wetlands. 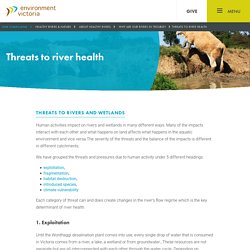 Wetlands. Wetlands Destruction - FLOW. Wetlands, or marshes, fens, bogs, and swamps, are the link between land and water. 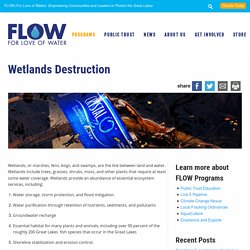 Wetlands include trees, grasses, shrubs, moss, and other plants that require at least some water coverage. Nationalgeographic. A wetland is an area of land that is either covered by water or saturated with water. 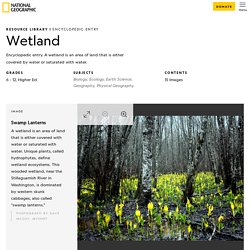 The water is often groundwater, seeping up from an aquifer or spring. A wetland’s water can also come from a nearby river or lake. Seawater can also create wetlands, especially in coastal areas that experience strong tides. Wetlands - What can I do. Cobourg Peninsula, Northern Territory (2009) Photo: J. 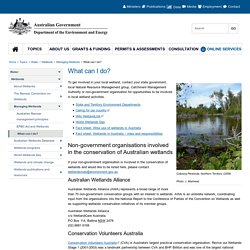 Muirhead To get involved in your local wetland, contact your state government, local Natural Resource Management group, Catchment Management Authority or non-government organisation for opportunities to be involved in local wetland activities. If your non-government organisation is involved in the conservation of wetlands and would like to be listed here, please contact wetlandsmail@environment.gov.au Australian Wetlands Alliance. Threatened species habitat destruction shows federal laws are broken. Human activities have destroyed more than 7.7 million hectares of threatened species habitat, revealing critical failures with Australia’s federal environmental protection laws. 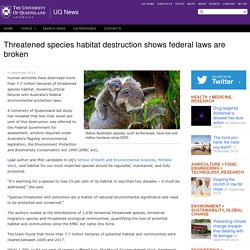 A University of Queensland-led study has revealed that less than seven per cent of this destruction was referred to the Federal Government for assessment, scrutiny required under Australia’s flagship environmental legislation, the Environment Protection and Biodiversity Conservation Act 1999 (EPBC Act). Threats to wetlands.

Melbourne's green spaces are being lost in rush to build more housing. Residential land provides the largest area of vegetation cover in Melbourne, followed by parkland and public spaces such as streets. Access to Urban Green Space in Cities of the Global South: A Systematic Literature Review. 3.1. Descriptive Statistics Most papers analyzed inequalities in green space provision in Asian countries (Figure 2). Thirty-two articles (70%) presented the results of studies conducted in Asia, of which 24 (52% of all articles) were conducted in China.