Mari (goddess) Modern rendering of Mari by Josu Goñi Margaret Bullen has noted "the myth of Mari brings together male and female attributes and qualities", and that Mari is to be regarded as "a model of androgyny and a metaphor for liberation in which sexual difference should cease to be the basis for inequality".[3] Anboto is one of the mountains where Mari is supposed to live In various legends, Mari is said to have sons or daughters, but their number and character fluctuate. 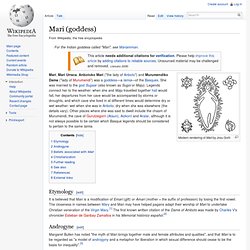 The two most well-known were her two sons, Atxular and Mikelatz. Atxular represents largely the Christianized Basque soul, becoming a priest after having learned from the Devil in a church in Salamanca and then having escaped. Another legend presents Mari as wife to the Lord of Biscay, Diego López I de Haro. Other legends are more simple. Lamia. In the myth, Lamia is a mistress of the god Zeus, causing Zeus' jealous wife, Hera, to kill all of Lamia's children (except for Scylla, who is herself cursed) and transform her into a monster that hunts and devours the children of others. 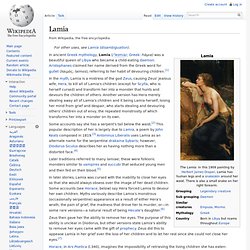 Another version has Hera merely stealing away all of Lamia's children and it being Lamia herself, losing her mind from grief and despair, who starts stealing and devouring others' children out of envy, the repeated monstrosity of which transforms her into a monster on its own. Later traditions referred to many lamiae; these were folkloric monsters similar to vampires and succubi that seduced young men and then fed on their blood.[5] In later stories, Lamia was cursed with the inability to close her eyes so that she would always obsess over the image of her dead children.

Some accounts (see Horace, below) say Hera forced Lamia to devour her own children. Zeus then gave her the ability to remove her eyes. Neu pranse Lamiae vivum puerum extrabat alvo. Lamia (Basque mythology) Sculpture of a lamina in Garagartza, Arrasate, Gipuzkoa In coastal areas, some believed that there were itsaslamiak in the sea, who had fish tails - a kind of mermaid. 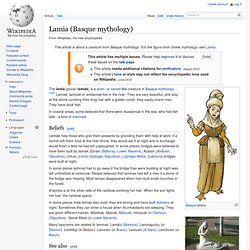 Lamiak help those who give them presents by providing them with help at work; if a farmer left them food at the river shore, they would eat it at night and in exchange would finish a field he had left unploughed. In some places, bridges were believed to have been built by lamiak: Ebrain (Bidarray, Lower Navarre), Azalain (Andoain, Gipuzkoa), Urkulu (Leintz-Gatzaga, Gipuzkoa), Liginaga-Astüe, (Labourd) bridges were built at night. In some places laminas had to go away if the bridge they were building at night was left unfinished at cockcrow. People believed that laminas had left a river if a stone of the bridge was missing. A lamina is at the other side of the rainbow combing her hair. In some places male lamias also exist; they are strong and have built dolmens at night. Weaving (mythology) Saturn (mythology) Saturn (Latin: Saturnus) is a god in ancient Roman religion, and a character in myth. Saturn is a complex figure because of his multiple associations and long history.

He was the first god of the Capitol, known since the most ancient times as Saturnius Mons, and was seen as a god of generation, dissolution, plenty, wealth, agriculture, periodic renewal and liberation. In later developments he came to be also a god of time. His reign was depicted as a Golden Age of plenty and peace. Huginn and Muninn. Huginn and Muninn sit on Odin's shoulders in an illustration from an 18th-century Icelandic manuscript In Norse mythology, Huginn (from Old Norse "thought"[1]) and Muninn (Old Norse "memory"[2] or "mind"[3]) are a pair of ravens that fly all over the world, Midgard, and bring information to the god Odin.

Huginn and Muninn are attested in the Poetic Edda, compiled in the 13th century from earlier traditional sources: the Prose Edda and Heimskringla, written in the 13th century by Snorri Sturluson; in the Third Grammatical Treatise, compiled in the 13th century by Óláfr Þórðarson; and in the poetry of skalds. The names of the ravens are sometimes modernly anglicized as Hugin and Munin. In the Poetic Edda, a disguised Odin expresses that he fears that they may not return from their daily flights. The Prose Edda explains that Odin is referred to as "raven-god" due to his association with Huginn and Muninn. Attestations[edit] Archaeological record[edit] Theories[edit] See also[edit] Notes[edit] Geri and Freki. The god Odin enthroned and flanked by the wolves Geri and Freki and the ravens Huginn and Muninn as illustrated (1882) by Carl Emil Doepler. In Norse mythology, Geri and Freki (Old Norse, both meaning "the ravenous" or "greedy one") are two wolves which are said to accompany the god Odin.

They are attested in the Poetic Edda, a collection of epic poetry compiled in the 13th century from earlier traditional sources, in the Prose Edda, written in the 13th century by Snorri Sturluson, and in the poetry of skalds. The pair has been compared to similar figures found in Greek, Roman and Vedic mythology, and may also be connected to beliefs surrounding the Germanic "wolf-warrior bands", the Úlfhéðnar. Etymology[edit] 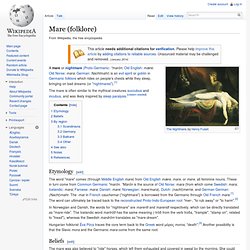 These in turn come from Common Germanic *marōn. *Marōn is the source of Old Norse: mara (from which come Swedish: mara; Icelandic: mara; Faroese: mara; Danish: mare; Norwegian: mare/mara), Dutch: (nacht)merrie, and German German: (Nacht)mahr. The -mar in French cauchemar ("nightmare") is borrowed from the Germanic through Old French mare.[1] The word can ultimately be traced back to the reconstructed Proto-Indo-European root *mer-, "to rub away" or "to harm".[2] Mora (mythology)