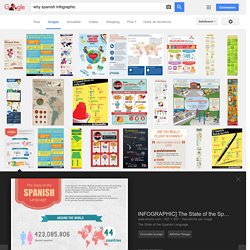 13 Cool and Interesting Facts About the Spanish Language. We are only a few hours away from El Día E, the big celebration of everyone who speaks Spanish. 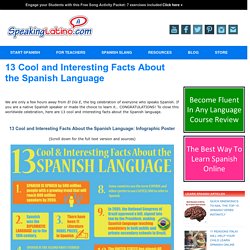 If you are a native Spanish speaker or made the choice to learn it… CONGRATULATIONS! To close this worldwide celebration, here are 13 cool and interesting facts about the Spanish language. 13 Cool and Interesting Facts About the Spanish Language: Infographic Poster (Scroll down for the full text version and sources) 143 English Words That Are Actually Spanish. By John-Erik Jordan Thanks to the popularity of Mexican cuisine north of the border (around the world, actually), there are plenty of Spanish words that English speakers knowingly adopt in day-to-day use: taco, tortilla and quesadilla are pretty standard imports. 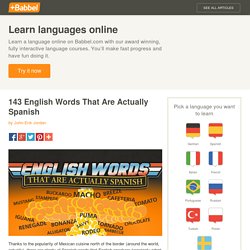 But you may be surprised to learn that hundreds more Spanish words are in everyday use. And if you think this is due to the United States’ rapidly growing Hispanic population, you’d actually be wrong. Spanish words have been used in English for a very long time. Before Mexicans came to the United States, Americans came to Mexico. Why spanish infographic. Netflixeando: 10 Latino Films You Should Stream on Netflix. How many times have you gone to Netflix wanting to watch something but got completely overwhelmed by the options. 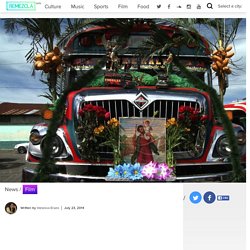 Or, you try to look for a good Latino movie but — how the hell do you find them? You might look in the “Foreign Movies” section or under “Foreign Language” for films from Latin America but there’s no U.S. Latino movies there. Since they are in English, they aren’t labeled foreign and hence are hard to find, unless you know the exact title you are looking for. Well, that’s why we’re here. This is a special edition list: for this weird post-World Cup / immigration hysteria era that we find ourselves in. In case you’ve been watching the news and this whole unaccompanied minor immigration “crisis” has got you confused, here are 5 Latino movies that will shine a light on how and why these kids are fleeing their home country… Innocent Voices La Camioneta Narco Cultura Which Way Home.

Opening Day: Over 28 Percent of MLB Players Are Foreign-Born. Twenty-eight percent of Major League Baseball players on the 25-man opening day rosters were born outside of the 50 United States, according to the commissioner's office. 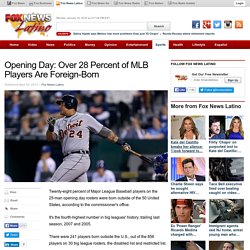 It's the fourth-highest number in big leagues' history, trailing last season, 2007 and 2005. There were 241 players born outside the U.S., out of the 856 players on 30 big league rosters, the disabled list and restricted list. The Dominican Republic, recent winner of the World Baseball Classic, was the best represented country with 89 players, including New York Yankees All-Star Robinson Cano. Venezuela was second with 63, which includes Triple Crown winner Miguel Cabrera, then Canada (17), Cuba (15) and Mexico (14).

Puerto Rico had 13 players, Japan had 11 and Colombia and Panama had four each. Milwaukee had the most foreign-born players with 14 and Texas was next at 13. Fox News Latino did the math and found out that 24.2 percent players on this year's MLB rosters are foreign-born players from Latin American countries. List of current Major League Baseball players by nationality. From Wikipedia, the free encyclopedia Major League Baseball players by nationality, excluding the United States, are listed below: Africa[edit] South Africa [edit] Asia[edit] Japan [edit] South Korea. 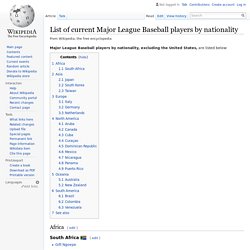 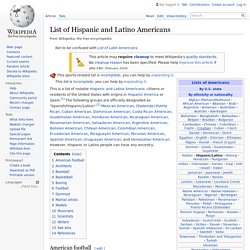 However, Hispanic or Latino people can have any ancestry. [edit] Raul Allegre - NFL placekicker[3]Leo Barker - retired NFL linebacker[3]Tony Casillas - retired NFL defensive lineman[3]Joe Kapp - retired NFL quarterback[3] J. P. Architects[edit] Monica Ponce de Leon - First Hispanic architect to receive the National Design Award in Architecture from the Smithsonian. Alberto Gonzales - 25 Most Influential Hispanics in America. On the surface, they seem an odd couple. one, the son of migrant workers, grew up in a house without hot water or a telephone. 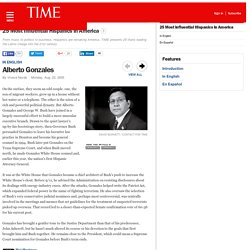 The other is the scion of a rich and powerful political dynasty. But Alberto Gonzales and George W. Bush have joined in a largely successful effort to build a more muscular executive branch. Drawn to the quiet lawyer's up-by-his-bootstraps story, then-Governor Bush persuaded Gonzales to leave his lucrative law practice in Houston and become his general counsel in 1994. Bush later put Gonzales on the Texas Supreme Court, and when Bush moved north, he made Gonzales White House counsel and, earlier this year, the nation's first Hispanic Attorney General. It was at the White House that Gonzales became a chief architect of Bush's push to increase the White House's clout. 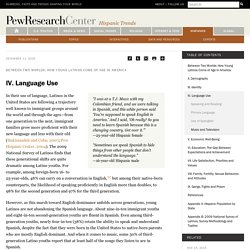 Language Use “I was at a T.J. Maxx with my Colombian friend, and we were talking in Spanish, and this white person said ‘You’re supposed to speak English in America.’ And I said, ‘Oh really? So you need to learn Spanish because this is a changing country. “Sometimes we speak Spanish to hide things from other people that don’t understand the language.” —16-year-old Hispanic male. What is the future of Spanish in the United States? With more than 37 million speakers, Spanish is by far the most spoken non-English language in the U.S. today among people ages 5 and older. 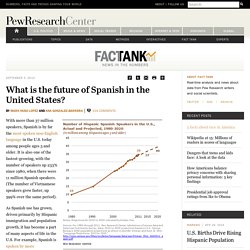 It is also one of the fastest-growing, with the number of speakers up 233% since 1980, when there were 11 million Spanish speakers. (The number of Vietnamese speakers grew faster, up 599% over the same period). As Spanish use has grown, driven primarily by Hispanic immigration and population growth, it has become a part of many aspects of life in the U.S. Businessinsider. Screen Junkies. Hispanic culture movies feature the elements that make up the culture of the Latino peoples. The term "culture movie" defines a film that incorporates the art, music, food and history of a group of people. Watching any of these films gives the viewer an insight to Latin culture. Hispanic culture includes Mexico, Brazil, Cuba and people from Mexico, Latin and Central America, including people from these countries who have immigrated to the United States.

"The Motorcycle Diaries. " Che Guevara takes a trip on a motorcycle and develops a life philosophy in this 2004 film directed by Walter Salles. Why Learn Spanish? – Mexperience. Spanish is one of the world’s leading and most widely spoken languages. As modern communications and transport systems bring the world closer together, language remains the means by which we interact and build understanding of other peoples, cultures and the principal way in which we may learn from each other. See Also: Blog Stories Related to Language in Mexico. 17 Reasons Every American Should Learn Spanish. Close According to the U.S Census Bureau, about 12 percent of U.S. residents speak Spanish at home.

As a result rising number of jobs require spanish or at least prefer individuals who can speak spanish. Spanish Language: The importance of Spanish Today. The Spanish language is the most widely spoken Romance language, both in terms of number of speakers and the number of countries in which it is the dominant language. There are more than 400 million Spanish speakers worldwide. Pronunciation and usage of the spoken Spanish language naturally vary among countries, but regional differences are not so great as to make the language unintelligible to speakers from different areas. Contrary to popular belief, there is no such thing as a single spoken "Spanish". How many people speak spanish.