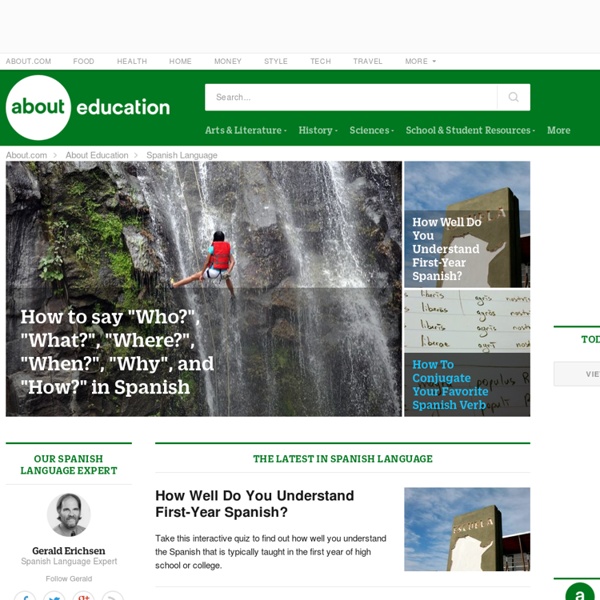 "¡Feliz Pascua!," meaning "Happy Easter!" is a phrase you'd probably say today if you were in a Spanish-speaking area. Perhaps surprisingly, though, the word Pascua isn't used only to refer to Easter, as explained in our new feature on the meanings of Pascua. In much of the Spanish-speaking world, Easter can surpass Christmas as a time of celebration and religious observance. If you're celebrating Easter today, you may want to take a look at these two features:

Category:English terms derived from Spanish Definition from Wiktionary, the free dictionary » All languages » English language » Terms by etymology » Terms derived from other languages » Indo-European languages » Italic languages » Romance languages » Spanish Terms in English that originate from the Spanish language. Planowanie - Learn to Speak a Foreign Language Plan Anyone can learn to speak a foreign language as long as they are willing to put the time and focus into the project. This plan focuses entirely on *speaking* your target language, offering specific tips to get you speaking immediately and improving your expressive ability. By the end of the plan, you'll have engaged in basic conversation with a real person and have the tools and confidence to learn even more. These suggestions are from experienced polyglot Benny Lewis, who blogs at to encourage adult language learners that it's never too late to learn to speak a new language and live their dream of communicating with foreign cultures. Image Credit: MrLonelyWalker/iStock/Thinkstock

100 Incredible Lectures from the World's Top Scientists Posted on Thursday June 18, 2009 by Staff Writers By Sarah Russel Unless you’re enrolled at one of the best online colleges or are an elite member of the science and engineering inner circle, you’re probably left out of most of the exciting research explored by the world’s greatest scientists. But thanks to the Internet and the generosity of many universities and online colleges, you’ve now got access to the cutting edge theories and projects that are changing the world in this list below. If you’re looking for even more amazing lectures, check out our updated list for 2012 with more talks from great minds. Spanish Grammar Home / Grammar Find topics in left sidebar. Frankly, when most people think of "grammar" they don't get very excited. But grammar can teach you something in minutes that might take days to figure out by immersion alone. Grammar is your friend! We believe in grammar, and we include it in our method.

deconstructing grammar - How to Learn (But Not Master) Any Language in 1 Hour (Plus: A Favor) Deconstructing Arabic in 45 Minutes Conversational Russian in 60 minutes? This post is by request. How long does it take to learn Chinese or Japanese vs. Spanish or Irish Gaelic? 10 TED Talks Perfect For the eLearning Industry Does eLearning kill creativity? Bring on the eLearning revolution! What do you believe about open-source learning? What eLearning developers can learn from kids?

Spanish Pronunciation Home / Pronunciation Find topics in left sidebar. Develop a native-like accent, feel successful from the very beginning, progress more quickly . . . there are lots of reasons that good pronunciation is important. You must speak out loud! Use this section to quickly develop confidence in your Spanish pronunciation skills. Basic Spanish vocabulary - Adjectives (with pronunciation!) Adjectives in Spanish The following English-Spanish and Spanish-English word lists contain the most important adjectives. An interactive practice tool is also available on this site that helps you learn the following list of words. All vocabulary topics, including this, can be found listed in the "Word practice" menu. Listen to the pronunciation! If you click on the Spanish words in the English-Spanish section, you can listen to their pronunciation by a native speaker.