Top Spanish festivals 2016. Spain offers plenty of festivals throughout the whole year, many of them specific to different towns and regions offering a huge variety in local specialities, trades, and cultural quirks. 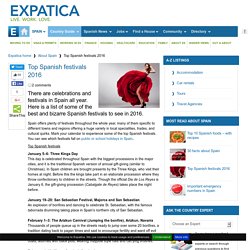 Mark your calendar to experience some of the top Spanish festivals. You can see which festivals fall on public or school holidays in Spain. Top Spanish festivals January 5–6: Three Kings Day This day is celebrated throughout Spain with the biggest processions in the major cities, and it is the traditional Spanish version of annual gift-giving (similar to Christmas). In Spain children are brought presents by the Three Kings, who visit their homes at night. January 19–20: San Sebastian Festival, Majorca and San Sebastian An explosion of bonfires and dancing to celebrate St. February 4–10: Sitges Carnival, Catalonia The huge gay event is one of the most flamboyant in Spain with wild partying launched by Jueves Lardero ('Fatty Thursday'). 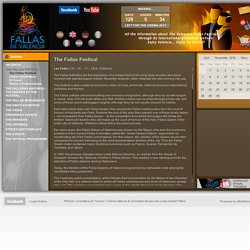 Recently, however, other materials are also coming into use. This festival is also a satirical and ironic vision of local, provincial, national and even international problems and themes. The Fallas criticize almost everything and everyone imaginable, although they do so with tongue in cheek. Over 370 full-scale fallas and 368 children’s fallas are mounted throughout the city, and some of these reach extravagant heights, although they do not usually exceed 20 metres. Each falla elects their own Fallas Queen from among the Fallas maidens who form the court of honour of that particular Falla. Festival of Fire in Valencia. Seville April Fair. Guide to Seville Feria, April Fair. 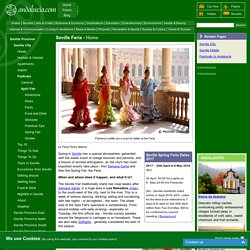 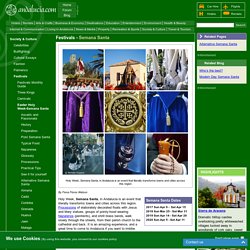 Processions of elaborately decorated floats with Jesus and Mary statues, groups of pointy-hood wearing Nazarenos (penitents), and shrill brass bands, walk slowly through the streets, from their parish church to the cathedral and back. It is an amazing experience, and a great time to come to Andalucia if you want to imbibe some deeply-held traditions that have less to do with religion than with social groupings and rituals. If you want major pageantry and rich, bejewelled Virgins, Malaga or Seville are the cities to head for. 10 things you should know about Easter Week in Andalucia. Holy Week in Andalusia - Official tourism website of Andalucía.

Epiphany in Spain. Epiphany. Many Christians around the world annually celebrate Epiphany on January 6. 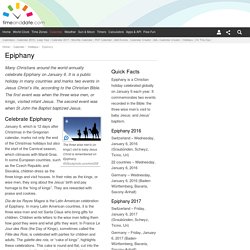 It is a public holiday in many countries and marks two events in Jesus Christ’s life, according to the Christian Bible. The first event was when the three wise men, or kings, visited infant Jesus. The second event was when St John the Baptist baptized Jesus. Celebrate Epiphany. Three Kings Day Spain Barcelona 2017 - Epiphany Reyes Magos.

The Three kings day, in spanish Día de los Reyes Magos, is one of the most celebrated festivals in Barcelona, just as in the rest of Spain. 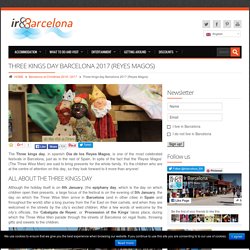 In spite of the fact that the ‘Reyes Magos’ (The Three Wise Men) are said to bring presents for the whole family, it’s the children who are at the centre of attention on this day, so they look forward to it more than anyone! Nochevieja - Spanish Culture. The winter holidays are a truly wonderful time to experience a new culture, as each town and country has its own set of time-honored traditions, holiday treats, music, etc. 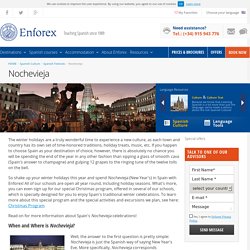 If you happen to choose Spain as your destination of choice, however, there is absolutely no chance you will be spending the end of the year in any other fashion than sipping a glass of smooth cava (Spain's answer to champagne) and gulping 12 grapes to the ringing tune of the twelve tolls on the bell. So shake up your winter holidays this year and spend Nochevieja (New Year's) in Spain with Enforex!

All of our schools are open all year round, including holiday seasons. What's more, you can even sign up for our special Christmas program, offered in several of our schools, which is specially designed for you to enjoy Spain's traditional winter celebrations. To learn more about this special program and the special activities and excursions we plan, see here: Christmas Program When and Where is Nochevieja? Nochevieja. La Tomatina festival 2016 – in pictures. La Tomatina – Página oficial.

Ll started the last Wednesday of August in 1945 when some young people spent the time in the town square to attend the Giants and Big-Heads figures parade. 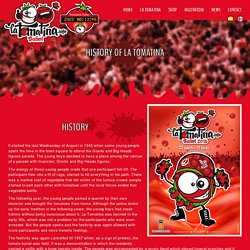 The young boys decided to have a place among the retinue of a parade with musician, Giants and Big-Heads figures. The energy of these young people made that one participant fell off. The participant flew into a fit of rage, started to hit everything in his path. There was a market stall of vegetable that fell victim of the furious crowd: people started to pelt each other with tomatoes until the local forces ended that vegetable battle. The following year, the young people picked a quarrel by their own decision and brought the tomatoes from home.

The festivity was again cancelled till 1957 when, as a sign of protest, the tomato burial was held. Spain Culture: Bull running in Spain. Bull Running in Spain Every year from July 7th-14th thousands pack into Pamplona to start Spain's most famous bull-running fiesta to honour Navarre capital's patron saint, San Fermin. 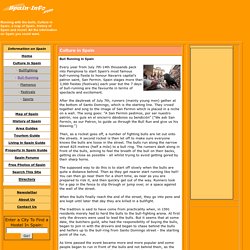