10 BEST ROPE LIFE HACKS YOU SHOULD KNOW! DIY Nautical Knot Rope Necklace - Handmade in the Heartland. I am so excited about this necklace. 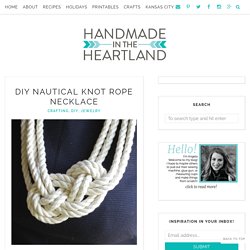 Don't you just love when you make something that you are so in love with? When i was getting all my ideas together for the DIY jewelry segment i did yesterday on fox4 this necklace wasn't even on the list, i was making some bracelets out of rope and then it hit me, nautical knot! Constrictor knot. History[edit] First called "constrictor knot" in Clifford Ashley's 1944 work The Ashley Book of Knots, this knot likely dates back much further.[5] Although Ashley seemed to imply that he had invented the constrictor knot over 25 years before publishing The Ashley Book of Knots,[1] research indicates that he was not its originator.[6] Ashley's publication of the knot did bring it to wider attention.[7] Although the description is not entirely without ambiguity, the constrictor knot is thought to have appeared under the name "gunner's knot" in the 1866 work The Book of Knots,[8][9] written under the pseudonym Tom Bowling.[10] in relation to the clove hitch, which he illustrated and called the "builder's knot". 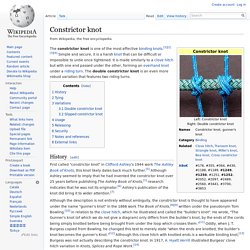 He wrote, "The Gunner's knot (of which we do not give a diagram) only differs from the builder's knot, by the ends of the cords being simply knotted before being brought from under the loop which crosses them. "[11] Oddly, when J. Tying[edit] Variations[edit] Usage[edit] How to Tie the Bush Bar & Belt by TIAT. Rope Ladder. Knots Alphabetical List. Rope ladder. How to Make a Rope Ladder. Editor’s note: This post was written by Bryan Black and originally ran on ITS Tactical. 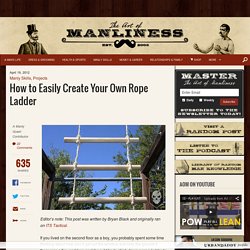 If you lived on the second floor as a boy, you probably spent some time thinking about how you’d get out the window and onto the ground if there was a fire, and how cool it would be to climb down a rope ladder to make your escape. But maybe your parents never bought you that ladder and you didn’t know how to make one yourself. Well today I’ll show you such a simple way to create a rope ladder, you’ll wonder how you never knew about it! What you’ll see here is a field expedient way to quickly throw together a ladder in a rescue situation or to complete the final touches on a Pioneering project. A truly versatile technique that you should throw into your knotty toolbox.

Ladder Lashing This ladder lashing should be created with natural fiber rope like Manila because it grips wooden rungs better. 青竹細工道場 How to Make Thin Strips of Bamboo 竹割り道具のご紹介. Recycled shopping bags crocheted into waterproof bedrolls. Bamboo Crafts Of Assam_Khaloi. Make Rope from Plastic Bags (without tools) How to Make a Rope Basket by TIAT. Quick and Easy Blackberry Bramble Basket. How to Make a Pine Needle Basket. How To Tie A Fishing Knot - Online Survival Blog & Survival News. Growing up, I would walk down to the pond with my Dad and my Papa. 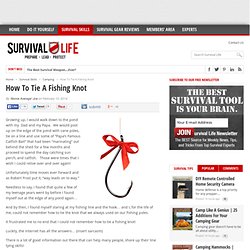 We would post up on the edge of the pond with cane poles, tie on a line and use some of “Papa’s Famous Catfish Bait” that had been “marinating” out behind the shed for a few months and proceed to spend the day catching sun perch, and catfish. Those were times that I wish I could relive over and over again! Unfortunately time moves ever forward and as Robert Frost put it, “way leads on to way.” Needless to say, I found that quite a few of my teenage years went by before I found myself out at the edge of any pond again… And by then, I found myself staring at my fishing line and the hook… and I, for the life of me, could not remember how to tie the knot that we always used on our fishing poles. The Knots You Need to Know.

Basic Knots: The Basic Knots should be known by anyone using knots. 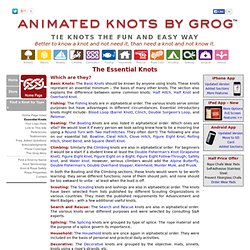 These knots represent an essential minimum – the basis of many other knots. The section also explains the difference between some common knots: Half Hitch, Half Knot and Overhand Knot. Fishing: The Fishing knots are in alphabetical order. The various knots serve similar purposes but have advantages in different circumstances. Essential introductory knots might include: Blood Loop (Barrel Knot), Clinch, Double Surgeon's Loop, and Palomar. Boating: The Boating Knots are also listed in alphabetical order. Climbing: Similarly the Climbing knots are also in alphabetical order. In both the Boating and the Climbing sections, these knots would seem to be worth learning: they serve different functions; none of them should jam; and none should be too awkward to untie - at least when the load is off. Scouting: The Scouting knots and lashings are also in alphabetical order. How to Make Rag Rugs – Make Your Own Rag Rugs – Braided Rag Rug. How to Make Rag Rugs 72K+ As I've mentioned before, we've been very excited to get moved into our farmhouse since we basically found out we didn't have any other options. 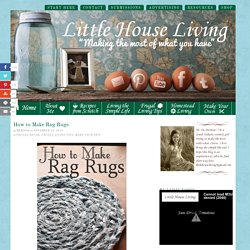 But even though that was the case, we are determined to make the best of it that we can. Previously to moving into our camper, we sold everything. And I do mean EVERYTHING. Everything that we did not use on a daily basis, all furniture, all decor, and anything extra that couldn't fit in the rv (some clothes, books, ect) was sold. Well I guess not everything turns out the way we planned so here we are, 9 months later in our new home without anything much for it and without any money to buy things for it. One of the things I wanted for my new house was some pretty rugs. It was incredibly cheap (for a nice rug) and not very hard to put together. What You Need: Rags, Old Clothing, Old Sheets, ectScissorsSewing MachineThread I found 2 old sheets at a thrift store in good shape. How to Weave a Grass Basket.