Bitglass Report: Microsoft Office 365 is disrupting the Google Apps disruptor. Less than a decade ago, Microsoft was seen very much as a company denying the validity of the cloud. 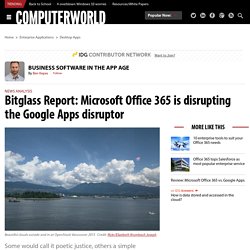 Its Office tools were a good example of this and steadfastly ignored industry trends in terms of rapid iteration, cloud delivery and subscription business models. Where Microsoft ignored realities, Google was quick to move, and Google Apps grew rapidly for very good reason — it was the only office productivity suite (ignoring, for a moment, outlier products like Zoho) that delivered cloud-ready solutions on a subscription pricing model. The world, or at least Microsoft's world, has, however, turned. Microsoft is now strongly embracing this new way of working. Office 365 is very much a cloud-first product. Microsoft rolls out first public preview of SharePoint Server 2016.

The first technical preview of SharePoint Server 2016 is available to the public. 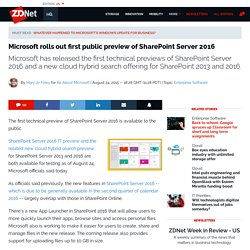 SharePoint Server 2016 IT preview and the related new cloud hybrid search preview for SharePoint Server 2013 and 2016 are both available for testing as of August 24, Microsoft officials said today. As officials said previously, the new features in SharePoint Server 2016 -- which is due to be generally available in the second quarter of calendar 2016 -- largely overlap with those in SharePoint Online. There's a new App Launcher in SharePoint 2016 that will allow users to more quickly launch their apps, browse sites and access personal files. Microsoft also is working to make it easier for users to create, share and manage files in the new release. The coming release also provides support for uploading files up to 10 GB in size. Report: 50 million devices now run Windows 10. How well is Windows 10 doing? 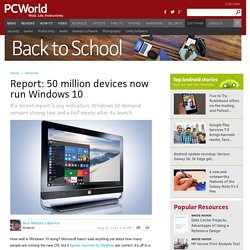 Microsoft hasn’t said anything yet about how many people are running the new OS, but if figures reported by WinBeta are correct, it’s off to a strong start. According to WinBeta’s sources, Windows 10 is now running on at least 50 million devices (PCs and tablets). These numbers are very unofficial, but to put things into perspective, Microsoft announced that it sold 100 million Windows 8 licenses roughly six months after that OS’s introduction, though an analysis of Windows 8’s percentage of Web traffic put the actual installed base at around 59 million as of May 2013. Josh Miller sur Twitter : "Getting ready to storm the Microsoft Xbox Press Conference #E32015 #CNET #Microsoft #E3 #Xbox... 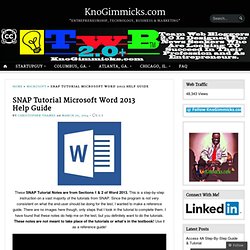 This is a step-by-step instruction on a vast majority of the tutorials from SNAP. Since the program is not very consistent on what the end-user should be doing for the test, I wanted to make a reference guide. There are no images here though, only steps that I took in the tutorial to complete them. I have found that these notes do help me on the test, but you definitely want to do the tutorials. These notes are not meant to take place of the tutorials or what’s in the textbook! Word 1A Tutorials: Spelling & Grammar Checker: Review Tab, Spelling and Grammar Button in the Proofing Group, Change to replace misspelled word, Click Add button to send words to customized dictionary. Using The Auto-correct Feature: Move pointer over automatically corrected word, click the white rectangle box, autocorrect options open, click control autocorrect options to display box. Using The Help Feature: Click Upper Right Help (?)

Some Xbox Ones sound like they're eating discs. Some new Xbox One owners unpacked their Day One Edition consoles today and were greeted by non-functioning disc drives, according to reports in Amazon reviews and YouTube videos. 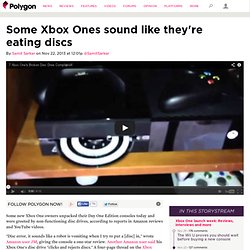 "Disc error, it sounds like a robot is vomiting when I try to put a [disc] in," wrote Amazon user JM, giving the console a one-star review. Another Amazon user said his Xbox One's disc drive "clicks and rejects discs. " A four-page thread on the Xbox forums begins with a user describing the noise as a "crunching sound," with numerous others saying they're having the same problem.

Several videos on YouTube show people sliding a disc into the console and hearing a loud rattling sound. One YouTube user compiled many of the clips into a single video that you can watch above. The percentage of affected consoles is unclear at the moment. Google In The Enterprise Survey: Mind The Gaps - Internet - Google - There's no doubt Google has made headway into businesses: Just 28% discourage or ban use of its productivity products. 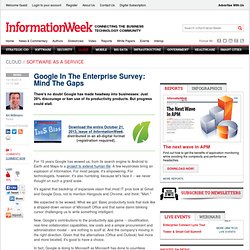 But progress could stall. For 15 years Google has wowed us, from its search engine to Android to Earth and Maps to a project to extend human life. A few keystrokes bring an explosion of information. For most people, it's empowering. For technologists, however, it's also humbling, because let's face it -- we never thought on such a grand scale. It's against that backdrop of expansive vision that most IT pros look at Gmail and Google Docs, not to mention Hangouts and Chrome, and think: "Meh. " We expected to be wowed. Why Microsoft's Office for iPad strategy still doesn't make sense. Ballmer has re-ignited anticipation for an iPad version of the Microsoft Office suite. 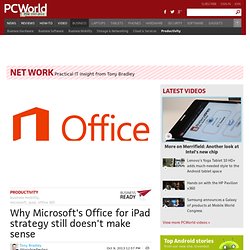 Don’t get too excited yet, though. Ballmer told an audience at a Gartner event in Florida that the iPad version won’t come until after a touch-first version is developed for Windows. My first reaction to the news was to shake my head and wonder if Microsoft is still stubbornly clinging to the idea that it can drive sales of Windows mobile devices by holding Microsoft Office hostage. 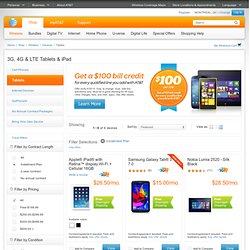 The Samsung Galaxy Tab® 3 7.0 is a 7" Android (TM) tablet designed for maximum portability with the same familiar Galaxy smartphone experience, that's made for sharing at an affordable entry level price. Nokia Lumia 2520 is a sleek & light weight Windows RT 8.1 tablet with an amazing 10.1" Full HD display. iPad® Air is 20 percent thinner1 and weighs one pound, so it feels unbelievably light in your hand. . $31.50/mo. to $46.50/mo. 16 to 128 GB iPad mini comes with a 7.9-inch Retina display with over 3.1 million pixels, an A7 chip with 64-bit architecture, ultrafast wireless, iSight and FaceTime HD cameras, powerful apps, and up to 10 hours of battery life.1 Yet it still fits easily in one hand. Surface de Microsoft, la nouvelle tablette Windows. Acheter maintenant.