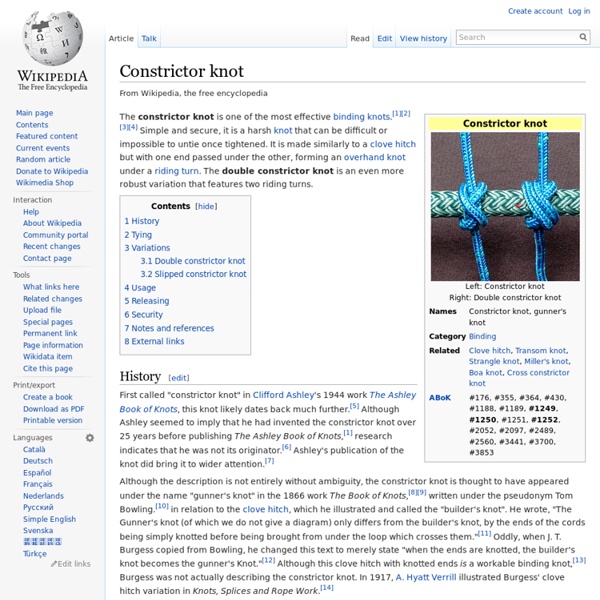 History[edit] First called "constrictor knot" in Clifford Ashley's 1944 work The Ashley Book of Knots, this knot likely dates back much further.[5] Although Ashley seemed to imply that he had invented the constrictor knot over 25 years before publishing The Ashley Book of Knots,[1] research indicates that he was not its originator.[6] Ashley's publication of the knot did bring it to wider attention.[7] Although the description is not entirely without ambiguity, the constrictor knot is thought to have appeared under the name "gunner's knot" in the 1866 work The Book of Knots,[8][9] written under the pseudonym Tom Bowling.[10] in relation to the clove hitch, which he illustrated and called the "builder's knot". He wrote, "The Gunner's knot (of which we do not give a diagram) only differs from the builder's knot, by the ends of the cords being simply knotted before being brought from under the loop which crosses them."[11] Oddly, when J. Tying[edit] Variations[edit] Usage[edit] Releasing[edit]

Survival Gear Review Coil Unattached Rope | How to Coil Unattached Rope Uses: A free, or unattached, rope (like a climbing rope) is best stored in a neat coil (ABOK # 3089, p 513). The coil should be well secured so that it will remain tidily coiled and can be used quickly and easily without tangles or twists. This technique of coiling a rope is known both as a Buntline and a Gasket Coil Making the Coil: Start by leaving the end slightly longer than the coil - so it remains outside the coil to avoid tangles. To make each turn form a neat loop, twist the rope slightly as you lay it in your hand. Finishing the Coil: The coil is finished by winding the rope tightly round the coil - with a finger (or your hand for large ropes) still inside the coil to maintain the lay of the turns. Using the Coil: After unwrapping, the coil should be laid on the ground with the end used to start the coil underneath; this end should have been "left outside the coil" at the beginning, and should remain undisturbed even if the rope is allowed to run out rapidly. Figure 8 Coil

20 Places to Find Free Books Online | Northern Cheapskate The following is a guest post by Bailey Harris. There are many different sites offer free books online. Within minutes, you could find enough reading material in the form of e-books and audio books to keep you and your family entertained for months, if not years. E-books Google Books – Google Books is a great place to find free classic books in the public domain. Read Print – Read Print makes thousands of novels, poems, and stories freely available online. Online Books Page – This University of Pennsylvania website lists over 800,000 books that can be read for free online. Project Gutenberg – Project Gutenberg was the first site to provide free e-books online and is still among the most popular. Bibliomania – Bibliomania offers more than 2,000 free classic books, plays, poems, and short stories. Authorama – Authorama has a small collection of classic books that can be read for free online or offline. ManyBooks.net – Nearly 30,000 free books are available on this site. Audio Books

How to Navigate by the Stars Explorers have used the stars as a compass for millennia, and if you’re out having adventures at night, you should add the skill to your arsenal. (If nothing else, it’s a killer party trick.) Here’s how to transform the night sky into your personal roadmap. 1) Learn the Big Three According to the Royal Naval Academy, 58 stars are handy for navigation. 2) Find the North Star It’s always within one degree of true north. 3) Shoot for the Moon If you can find Orion’s sword, following its point will show you south. 4) Down Under? The North Star isn’t visible below the equator. 5) Move Like a Star Like the sun, stars skate east to west. 6) Take a Survey Forgot to memorize your constellations?

Never Talk to the Police | Quick Hitts By Dave Hitt on Mar 31, 2010 in Featured, Police State What’s the best response when a cop asks you something? Silence, or a short, polite non-answer. Shut up. You should be polite and calm whenever dealing with any armed person. These videos made the rounds about a year ago. In the first part of the first video a fast talking law professor gives you detailed reasons why you should never talk to the police. This is part two, where a former police officer fills in the details. Here are some practical examples of how to legally preserve your rights in an encounter with police: Ok, after all that heavy duty stuff, we need a breather. Cruftbox When Intelligentsia Coffee opened in Pasadena recently, I was intrigued the lasagna cupcakes they served. The cupcakes are made by Heirloom LA, a catering business. About the size of a muffin, a single lasagna cupcake was a delicious meal. After seeing how much my daughter enjoyed them (she ate my entire cupcake and I had to order a second one), I decided I had to try making them at home. After a bit of research, here is my method. The ingredients are fairly simple. Spray or wipe the cupcake tin with olive oil for prevent sticking and add a little flavor. Once you filled in the first layer, gently press another wrapper in, forming another cup. Once you've placed the second wrapper, repeat the filling as you see fit. A bit of Mozzarella cheese on top of it all. I baked them for 20 minutes at 375° F and then come out perfectly browned. If you remembered to use olive oil, they should slide out easily with top crispy and the wrapper moist and tender. The small cupcake size works well for us.

52 Plants In The Wild You Can Eat: Edible Greenry Written by Suntactics We all know our vegetables and fruits are safe to eat, but what about other wild edibles? Here are a few common North American goodies that are safe to eat if you find yourself stuck in the wild. For the serious conoisseur, if you get to the end on page 6, there's a great informational documentary video on 100 edible plants: Blackberries: Many wild berries are not safe to eat, it’s best to stay away from them. Dandelions: The easiest to recognize is the dandelion, in the spring they show their bright yellow buds. Asparagus: The vegetable that makes your pee smell funny grows in the wild in most of Europe and parts of North Africa, West Asia, and North America. Elderberries: An elderberry shrub can grow easily grow about 10 feet and yield tons of food, their leaf structure is usually 7 main leaves on a long stretched out stem, the leaves are long and round and the leaves themselves have jagged edges. Gooseberries: Mulberries: Pine: Kudzu:

Man vs. Wild Man vs. Wild,[1] also called Born Survivor: Bear Grylls,[2] Ultimate Survival,[3][4] Survival Game,[5] or colloquially as simply Bear Grylls in the United Kingdom, is a survival television series hosted by Bear Grylls on the Discovery Channel. In the United Kingdom, the series was originally shown on Channel 4, but later series were broadcast on Discovery Channel UK. The series was produced by British television production company Diverse Bristol. The show was first broadcast on 10 November 2006 after airing a pilot episode titled "The Rockies" on 10 March 2006. Background[edit] The general format of each episode is the premise that Grylls is left stranded in a region with his film crew. Each episode takes about 7–10 days to shoot. In July 2011, Grylls had a special co-host, actor Jake Gyllenhaal in the season 7 premiere of the show on the Discovery Channel; they travelled through Iceland. In March 2012, Discovery Channel terminated its contract with Grylls due to contract disputes.[10]

Says-It.com Extreme Travelogue Former "Seasteaders" Come Ashore To Start Libertarian Utopias In Honduran Jungle The seasteader-in-chief is headed ashore. Patri Friedman (that’s Milton Friedman's grandson to you), who stepped down as the chief executive of the Peter Thiel-backed Seasteading Institute in August, has resurfaced as the CEO of a new for-profit enterprise named Future Cities Development Inc., which aims to create new cities from scratch (on land this time) governed by "cutting-edge legal systems." The startup may have found its first taker in Honduras, whose government amended its constitution in January to permit the creation of special autonomous zones exempt from local and federal laws. Seasteading, i.e. the creation of sovereign nations floating offshore, is enshrined in libertarian thought as an end-run around the constraints of stodgy nation-states. One potential model is something Friedman calls Appletopia: A corporation, such as Apple, “starts a country as a business. Instead of seasteading, Future Cities is modeling itself on “charter cities.”