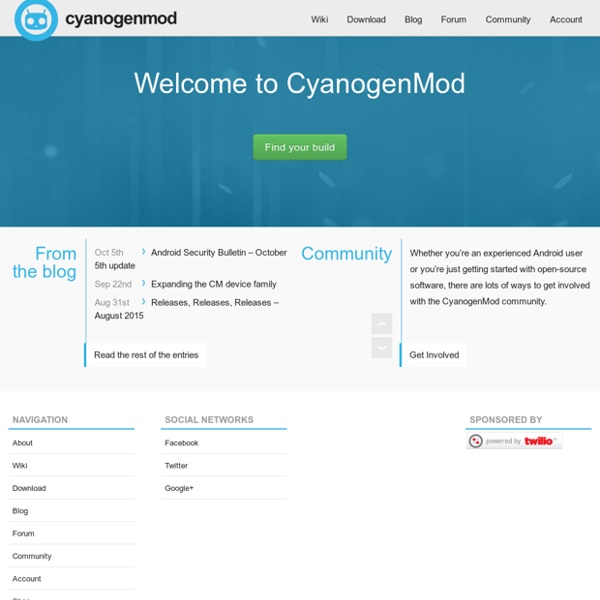 List of Chromium Command Line Switches How to use a command line switch? The Chromium Team has made a page on which they briefly explain how to use these switches. Conditions These are rather technical. [02.06.2012][CF-Root 5.6] KJ*,KK*,KL-1378,LA-1346,LB1,LC1,LP-1YF89,LQ2 - su+bb+CWM5 Installation intructions The Samsung Galaxy Note keeps track of the kind of kernel you are running (stock or custom) and how often you have flashed kernels. This is probably for warranty purposes. There is currently no known way to reset this counter on the SGN. So, what we want to do is get root, busybox, and CWM, all without getting that ugly yellow triangle or updating the flash counter on our device. Luckily, CF-Root allows for all these things.

BB Introduction ¶ OsmocomBB is an Free Software / Open Source GSM Baseband software implementation. It intends to completely replace the need for a proprietary GSM baseband software, such as drivers for the GSM analog and digital baseband (integrated and external) peripherals the GSM phone-side protocol stack, from layer 1 up to layer 3 In short: By using OsmocomBB on a compatible phone, you will be able to make and receive phone calls, send and receive SMS, etc. based on Free Software only. Nexus One Gets A Taste Of Ice Cream Sandwich Thanks To CM9 Google may have run out of love for the Nexus One as far as Ice Cream Sandwich is concerned, but that doesn’t mean the legions of loyal Android developers have. An intrepid dev named TexasIce on the XDA forums has managed to get an early build of CyanogenMod 9 up and running on Google’s first Nexus device, and it looks mighty impressive for a work-in-progress. Most of the basics seem to run without a hitch: text input and phone dialing work with a minimum of lag, as does web browsing and poking around in the Android Market. Nearly all of Ice Cream Sandwich’s functionality is present and accounted for, though it isn’t all sunshine and roses. Neither the camera nor USB mass storage work yet, and the lack of hardware acceleration means the build has a tendency to chug when it comes to some of Ice Cream Sandwich’s more impressive animations. It’s certainly a work in progress, but I’ve got high hopes for a smooth ride by the time a stable CM9 release sees the light of day.

How to take full Backup of your Android without Rooting : Tips For Droid Android is a rising mobile OS platform and have left behind Blackberry OS, Nokia Symbian, Apple iOS. When you root your Android device and install some developed firmware you can unleash the real power and functionality of your device. WE are going to tell you here how you can backup your device without rooting it. This requires adb drivers on a windows PC and you will need to execute some commands to get a full backup of your device. The procedure is somehow hard for a starter but we have explained everything in step to make it lot easier for you to backup your Android device easily and safely. If you have already installed the Android SDK and also updated the Android SDK Platform Tools with the latest version using SDK Manager.

[SCRIPT]Ultimate Kernel Cleaning Script - 4.0 [MIUI/CM7 and SAMSUNG] [13.11.11] BE CAREFUL! READ BELOW!If your running a Samsung based rom (Like AOSP Essence, Darky's, Juwe's Smart and so on) use the Samsung oneIf you're running MIUI or CyanogenMod pick the MIUI / CM7 one Since many users have complained about phone instability after flashing another kernel, I decided to make a Recovery Script to clean everything may cause instability. As we know also zach made something like this, but his script deletes only init.d config files while many problems are generated by cache and dalvik-cache waste files.

Driver for Deploying Any App to Any Cloud Available for Free Last December, a company called GigaSpaces began demonstrating a unique kind of Java-based abstraction layer made for use within cloud platforms. Cloudify is a layer that abstracts the application platform from the cloud that it's running on. So you can literally do this: You can set up and fully flesh out your SaaS application on your local system, complete with middleware, just as though it's running in the cloud. Then once it works, you relocate it. A unique cloud driver makes the homogenous application cloud run atop the specific platform cloud.

The 12 Best Firefox About:Config Performance Tweaks Below are a few of our favorite Firefox performance hacks, tweaks, and productivity enhancements that can be made via the About:config of Firefox. We show you step-by-step how to perform the tweaks and what each of the tweaks are responsible for and how they improve your performance in Firefox and increase your productivity. Make Firefox Give Back RAM When Minimized Typically when a program in Windows is minimized for a period of time, the program will give back the RAM that it used so that users of the system can use the memory for other applications that may be running. By default, Firefox does not perform in this matter, making your system run lower on RAM than it should. To enable the setting so that Firefox gives back RAM, do the following: 1) In the Firefox address bar type: about:config and then hit Enter. 2) In the “Filter” search, type: config.trim_on_minimize 3) Right click on the setting and click “toggle” so that the Value turns to “true”.