The Emerald Tablet and Hermetica

Emerald Tablets Of Thoth, 50,000 Year Old Tablets Reportedly From Atlantis. (Before It's News) The Tablets of Thoth are imperishable, resistant to all elements, corrosion and acids. 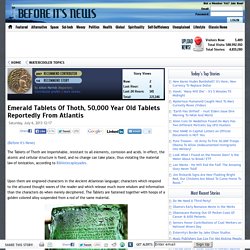 In effect, the atomic and cellular structure is fixed, and no change can take place, thus violating the material law of ionization, according to Bibliotecapleyades. Upon them are engraved characters in the Ancient Atlantean language; characters which respond to the attuned thought waves of the reader and which release much more wisdom and information than the characters do when merely deciphered. The Tablets are fastened together with hoops of a golden colored alloy suspended from a rod of the same material. Dr. Emerald Tablet. An imaginative 17th century depiction of the Emerald Tablet from the work of Heinrich Khunrath, 1606. 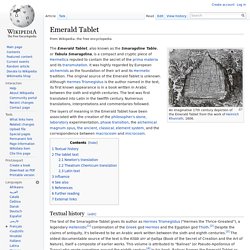 The Emerald Tablet, also known as the Smaragdine Table, or Tabula Smaragdina, is a compact and cryptic piece of Hermetica reputed to contain the secret of the prima materia and its transmutation. It was highly regarded by European alchemists as the foundation of their art and its Hermetic tradition. The original source of the Emerald Tablet is unknown.

Although Hermes Trismegistus is the author named in the text, its first known appearance is in a book written in Arabic between the sixth and eighth centuries. The text was first translated into Latin in the twelfth century. Textual history[edit] The tablet text[edit] Newton's translation[edit] A translation by Isaac Newton is found among his alchemical papers that are currently housed in King's College Library, Cambridge University.[8] Theatrum Chemicum translation[edit] Latin text[edit] The Kybalion Index. Sacred Texts Esoteric Buy this Book at Amazon.com Contents Start Reading Text [Zipped] This concise work on 'The Hermetic Philosophy' outlines seven universal principles: Mentalism, Correspondence, Vibration, Polarity, Rhythm, Cause and Effect, and Gender. 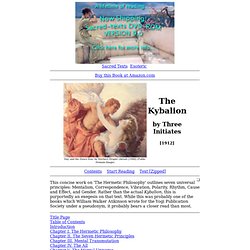 Rather than the actual Kybalion, this is purportedly an exegesis on that text. While this was probably one of the books which William Walker Atikinson wrote for the Yogi Publication Society under a pseudonym, it probably bears a closer read than most. Title PageTable of ContentsIntroductionChapter I. Thoth. Thoth Thoth was the God of Knowledge, the Moon, Measurement, Wisdom, the Alphabet, Records, Thought, Intelligence, Meditation, the Mind, Logic, Reason, Reading, Hieroglyphics, Magic, Secrets, Scribes, and Writing. 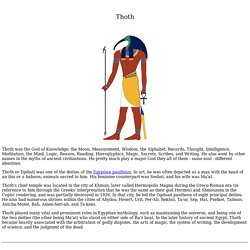 He also went by other names in the myths of ancient civilizations. He pretty much play a major God they all of them - same soul - different identities. Thoth or Djehuti was one of the deities of the Egyptian pantheon. In art, he was often depicted as a man with the head of an ibis or a baboon, animals sacred to him. Thoth's chief temple was located in the city of Khmun, later called Hermopolis Magna during the Greco-Roman era (in reference to him through the Greeks' interpretation that he was the same as their god Hermes) and Shmounein in the Coptic rendering, and was partially destroyed in 1826. A Hyper-History of the Emerald Tablet. The Emerald Tablet The Emerald Tablet is one of the most revered documents in the Western World, and its Egyptian author, Hermes Trismegistus, has become synonymous with ancient wisdom. 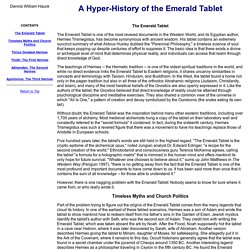 His tablet contains an extremely succinct summary of what Aldous Huxley dubbed the "Perennial Philosophy," a timeless science of soul that keeps popping up despite centuries of effort to suppress it. The basic idea is that there exists a divine or archetypal level of mind that determines physical reality, and individuals can access that realm through direct knowledge of God. The Emerald Tablets of Thoth. The Emerald Tablet: Time Capsule of Wisdom from Mankind's Unknown Benefactors. What Is the Emerald Tablet? 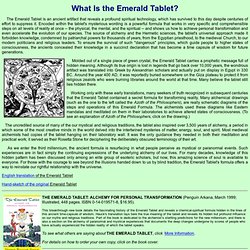 The Emerald Tablet is an ancient artifact that reveals a profound spiritual technology, which has survived to this day despite centuries of effort to suppress it. Encoded within the tablet's mysterious wording is a powerful formula that works in very specific and comprehensible steps on all levels of reality at once -- the physical, the mental, and the spiritual -- and shows us how to achieve personal transformation and even accelerate the evolution of our species.

The source of alchemy and the Hermetic sciences, the tablet's universal approach made it forbidden knowledge, condemned by patriarchal powers for thousands of years, from the Egyptian priesthood, to the medieval Church, to our modern politicians and religious leaders. Molded out of a single piece of green crystal, the Emerald Tablet carries a prophetic message full of hidden meaning.