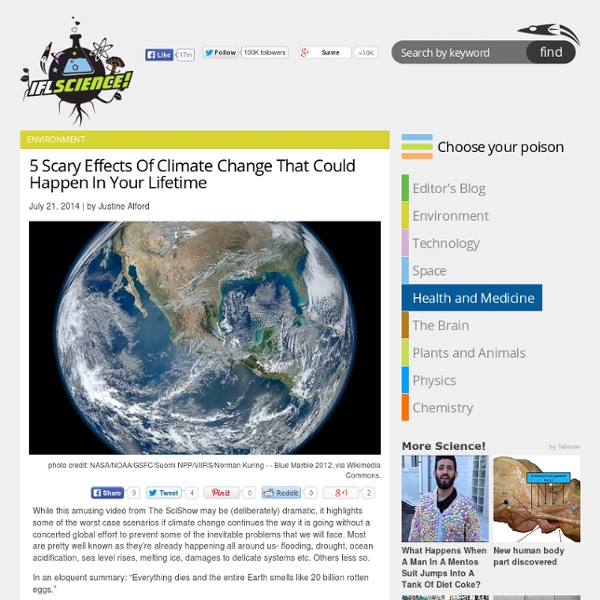 While this amusing video from The SciShow may be (deliberately) dramatic, it highlights some of the worst case scenarios if climate change continues the way it is going without a concerted global effort to prevent some of the inevitable problems that we will face. Most are pretty well known as they’re already happening all around us- flooding, drought, ocean acidification, sea level rises, melting ice, damages to delicate systems etc. Others less so. In an eloquent summary: “Everything dies and the entire Earth smells like 20 billion rotten eggs.” Check it out:

Sea level rise will swallow Miami, New Orleans, study finds Say goodbye to Miami and New Orleans. No matter what we do to curb global warming, these and other beloved US cities will sink below rising seas, according to a study Monday. But making extreme carbon cuts and moving to renewable energy could save millions of people living in iconic coastal areas of the United States, said the findings in the October 12 edition of the Proceedings of the National Academy of Sciences, a peer-reviewed US journal. Scientists have already established that if we do nothing to reduce our burning of fossil fuel up to the year 2100, the planet will face sea level rise of 14-32 feet (4.3–9.9 meters), said lead author Ben Strauss, vice president for sea level and climate impacts at Climate Central.

Test Yourself for Hidden Bias Psychologists at Harvard, the University of Virginia and the University of Washington created "Project Implicit"to develop Hidden Bias Tests — called Implicit Association Tests, or IATs, in the academic world — to measure unconscious bias. To take Project Implicit's Hidden Bias Tests, click here. You may be asked to register. Polar vortex The polar vortex The typical polar vortex configuration in November, 2013... ...A wavy polar vortex on January 5, 2014. 17 People Reveal The Disadvantages Of Being Smart Producer’s note: Someone on Quora asked: What are the disadvantages of being smart? Here are some of the best answers that’s been pulled from the thread. 1. Marcus Ford

Antarctic ice is melting so fast the whole continent may be at risk by 2100 Antarctic ice is melting so fast that the stability of the whole continent could be at risk by 2100, scientists have warned. Widespread collapse of Antarctic ice shelves – floating extensions of land ice projecting into the sea – could pave the way for dramatic rises in sea level. The new research predicts a doubling of surface melting of the ice shelves by 2050. By the end of the century, the melting rate could surpass the point associated with ice shelf collapse, it is claimed. If that happened a natural barrier to the flow of ice from glaciers and land-covering ice sheets into the oceans would be removed. Lead scientist, Dr Luke Trusel, Woods Hole Oceanographic Institution in Massachusetts, US, said: “Our results illustrate just how rapidly melting in Antarctica can intensify in a warming climate.

How to Deprogram Yourself “We are caged by our cultural programming. Culture is a mass hallucination, and when you step outside the mass hallucination you see it for what it’s worth.” -Terence Mckenna Acceleration of snow melt in an Antarctic Peninsula ice core during the twentieth century : Nature Geoscience Over the past 50 years, warming of the Antarctic Peninsula has been accompanied by accelerating glacier mass loss and the retreat and collapse of ice shelves. A key driver of ice loss is summer melting; however, it is not usually possible to specifically reconstruct the summer conditions that are critical for determining ice melt in Antarctic. Here we reconstruct changes in ice-melt intensity and mean temperature on the northern Antarctic Peninsula since AD 1000 based on the identification of visible melt layers in the James Ross Island ice core and local mean annual temperature estimates from the deuterium content of the ice. During the past millennium, the coolest conditions and lowest melt occurred from about AD 1410 to 1460, when mean temperature was 1.6 °C lower than that of 1981–2000. Since the late 1400s, there has been a nearly tenfold increase in melt intensity from 0.5 to 4.9%. View full text