Fantastic Orchids. Prior to the late twentieth century, when plopping an $8 orchid into your shopping cart at the grocery store became the norm, the exotic flowers were limited only to the wealthy. 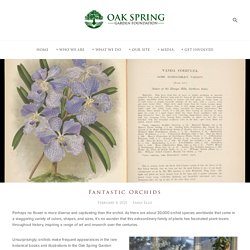 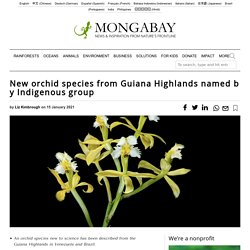 On an expedition in the tepuis, or “sprouting rock,” landscape of the Guiana Highlands in South America, Mateusz Wrazidlo snapped a photo of an orchid he had never seen before. Back in the herbarium, a place where dried plant samples are kept for research, he and his colleague, the orchid expert Eric Hágsater, determined it was a species new to science All species names consist of two parts. Orchid Research Newsletter. For #Foliagefriday thought I’d pull this out, this is a species of Jewel Orchid. From Malaysia □□ &amp; New Guinea □□ This grows in soil beneath the forest canopy rather than as an epiphyte. The phenomenal foliage always reminds me of the 1980 movie □ ‘Tr.

Lady Tankerville’s Legacy by Judi Stone and Phillip Cribb. Full of illustrations and photos of Phaius and Gastrorchis orchids, also my painting of Gastrorchis pulchra in this beautiful,colourful and interesting book #illustratedbooks. Linnean Podcast #32: Slipper Orchids by The Linnean Society of London. Enduring Beauty: Orchid portraits at the RHS. Orchid breeders have been creating hybrid orchids since the 1850s and the RHS Orchid Committee has been judging and giving awards to new orchids since 1889. 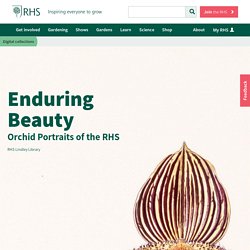 The committee wanted accurate portraits of orchids to help make sure that it did not give an award to the same orchid twice under different names. It has been estimated that, since the introduction of tropical species into cultivation, orchid growers have produced more than 100,000 different hybrids and cultivars. Paphiopedilum of the Philippines. Floral Fixation — Lady Science. Born in Edinburgh in 1778, Walker’s life was similarly bound up in the spread of colonial power. 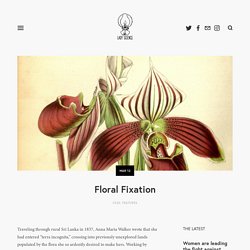 Unmarried in her twenties, she followed her father to Saint Helena in the South Atlantic Ocean, leaving the island almost two decades later for India, where she quickly met and wedded an ambitious army captain, George Warren Walker. The couple moved to Sri Lanka where, accompanied by a team of guides, porters, and servants, Walker climbed Adam’s Peak in 1833. William Deans Cowan (1844-1923) collection of 52 watercolour drawings of Madagascar orchids / by the Rev. W. Deans Cowan. The Orchid Paintings of Glasnevin. Frederick Moore (1857-1949) was the son of David Moore (1808-1879) who had been the Curator at Glasnevin for over forty years. 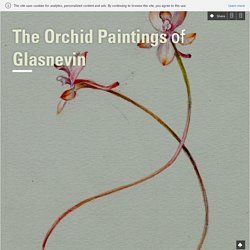 Following his father's death, he took over the management of the Botanic Gardens. This was an opportunity for him to explore his horticultural and botanical interests. David Moore had studied orchids and had succeeded in cultivating orchids from seed. But, it was Frederick Moore with his special interest in tropical orchids, who focused on developing the orchid collection. One of the ways he acquired new species was at plant auctions in London. Although there are records relating to the collection, it is difficult to estimate its exact size. (8) Quick Botany Lesson: Orchid Flowers. World's smallest orchid flower discovered in Brazil. A number of plants had been delivered for analysis to the Environmental Conservation Unit (UCAD) on the tiny island, Ilha de Santa Catarina, where Mr Siqueira was researching a subtype of orchids, which grow on other plants. 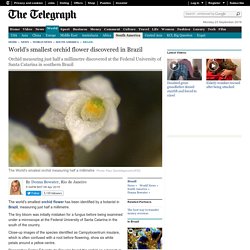 "In the whole group, all the plants are small in general, but this overdid the dose and became tiny," he joked. "I found the little flower and researched orchids. There isn't one as small as this. "They are generally endemic in certain areas of the forest, like the Atlantic forest, with restricted range but relatively abundant in population when found. "They are morphologically similar; without the flower, it is almost impossible to distinguish one species from another. " According to Mr Siqueira, 10 per cent of flowering plants are orchids. A rare orchid might not need a rare fungus to germinate. All orchids are at least partially mixtrophic. 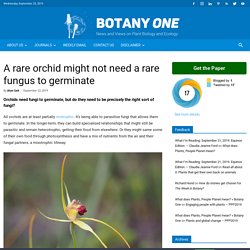 It’s being able to parasitise fungi that allows them to germinate. In the longer-term, they can build specialised relationships that might still be parasitic and remain heterotrophic, getting their food from elsewhere. Or they might same some of their own food through photosynthesis and have a mix of nutrients from the air and their fungal partners, a mixotrophic lifeway. Not all fungi are the same, and orchids might require their own partners. Could this place a limit on orchid distribution, leaving them unable to germinate where their fungal partners don’t live?

The Orchidaceous Plants of Franz Bauer and John Lindley. Two of the most important early contributors to our understanding of orchids were the artist Franz Bauer (1758-1840) and the English botanist and gardener John Lindley (1799-1865), who was to become known as the “father of modern orchidology”. 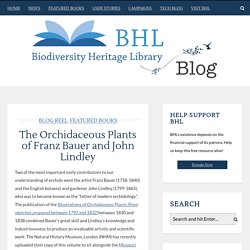 Iconographie des orchidées du Brésil : If you are generating a PDF of a journal article or book chapter, please feel free to enter the title and author information.

The information you enter here will be stored in the downloaded file to assist you in managing your downloaded PDFs locally. Thank you for your request. Please wait for an email containing a link to download the PDF. For your reference, the confirmation number for this request is . The Century-Long Scientific Journey of the Affordable Grocery Store Orchid. Wholesale orders go out today at Waldor Orchids, and the front room is filled with daubs of pink, purple, and orange, sweeps of peach, yellow splotches splattered with blood-red droplets, palettes of lavender fading into white. “This order here is a real basic order,” says Dave Off, picking a scrawled slip off the wall. Here in the greenhouses his grandfather built by the bay in Linwood, New Jersey, there are plants that have been alive for more than 100 years and plants that were born 18 months before in test tubes in Florida.

That “basic order” means two large pots, with four phalaenopsis orchid plants apiece, two facing forward and two doubles—each with a pair of flower-bearing, stem-like spikes—turned towards the side. When they’re in bloom, phalaenopsis spikes (or inflorescences, as they’re also known) curve gently under the weight of an elegant row of flowers. Collection: Conrad Loddiges &amp; Sons orchid watercolors. Illustrations of Orchidaceous Plants [from sketches prepared between 1792 and 1832] / The Orchidaceous Plants of Franz Bauer and John Lindley. HERBARIUM - RUPP - OrchidCambodia. Lindenia : iconographie des orchidées. Download BibTeX citations. Orchidelirium: The Orchid Craze Takes Printed Form – Biodiversity Heritage Library. Walk into most any nursery or florist and you will see beautiful orchids of many colors and sizes, with “easy care” instructions attached right to the pot enabling even the brownest thumb success.

Want to shake the winter doldrums? Attend an orchid show or meeting – there are over 500 local groups affiliated with the American Orchid Society alone. Orchids are as diverse as they are beautiful, with over 27,000 accepted species living in nearly every corner of the globe. We are not alone in our fascination with orchids. In the nineteenth century, Europe was gripped by what has been named “Orchidelirium.”

The information you enter here will be stored in the downloaded file to assist you in managing your downloaded PDFs locally. Thank you for your request. Please wait for an email containing a link to download the PDF.