Trees Are Aware of Their Neighbors and Give Them Room. In 'crown shyness,' some tree species respect those nearby and keep their leaves to themselves. 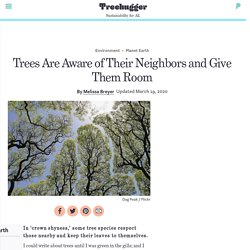 I could write about trees until I was green in the gills; and I do. And it's probable that every time I write about them, I slip into anthropomorphising them. Maybe they don't walk around and fly to the moon, but they are truly remarkable organisms with gifts and talents all their own. They are some of the planet's most noble workhorses – we'd be nothing without them – and they deserve all the respect they can get. Plant Neurobiology - Commentary - The New Yorker. Can plants talk to each other - Richard Karban. Do Plants Think? (8) How plants tell time - Dasha Savage. (8) The amazing ways plants defend themselves - Valentin Hammoudi.

Sedate a Plant, and It Seems to Lose Consciousness. Is It Conscious? Pavlov's plants: new study shows plants can learn from experience. The first time I met the Australian evolutionary ecologist Monica Gagliano, she was wearing colourful paisley trousers and was giving an animated talk at a 2014 environmental humanities conference in Canberra. 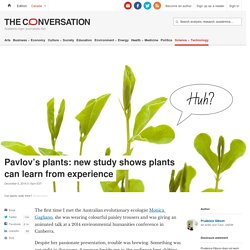 Despite her passionate presentation, trouble was brewing. Something was not right in the room. A woman beside me in the audience kept shifting her weight. A man to my left had crossed his arms and released several voluble sighs. Why? That day in Canberra three years ago, Gagliano’s time frames were questioned. Sensitive plants In a famous 2013 New Yorker article by Michael Pollan, The Intelligent Plant, Gagliano was introduced to readers as someone whose experiments are extending the concept of cognition to the plant world. Greg Gage: Electrical experiments with plants that count and communicate. Scientists discover plants have 'brains' that decide when to sprout. Introducing Pando Populus. Suzanne Simard: How trees talk to each other. Microsoft Is Teaching Your Plants To Talk Back. Gardeners have long claimed that talking to plants helps them grow—an idea backed up by science. 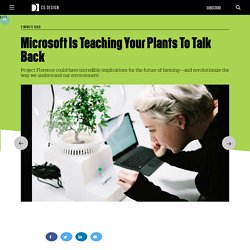 The "Walking trees" of Central and South America move a few centimeters every day. Lord of the Rings fans will be pleased to learn that real-life Ents, or at least a close cousin of theirs, can be found marching through the forests of the Sumaco Biosphere Reserve near Quito, Ecuador. 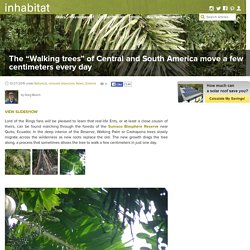 In the deep interior of the Reserve, Walking Palm or Cashapona trees slowly migrate across the wilderness as new roots replace the old. The new growth drags the tree along, a process that sometimes allows the tree to walk a few centimeters in just one day. Socratea exorrhiza is a palm tree native to tropical biomes in Central and South America. Up to 25 meters tall, the Walking Palm is pollinated by beetles and its seeds and seedlings are a food source for many animals living in this ecosystem.

Usually found in wet areas, the Walking Palm stands on stilted roots that strategically regrow. Related: Trees thriving on contaminated land could help clean up humanity’s mess. Plants May Have Ability To Learn. Plants Exhibit The Same Senses As Humans And See, Touch, Smell, Hear and Even Taste. By: Daniel Chamovitz, Director of the Manna Center for Plant Biosciences at Tel Aviv University In Israel, Guest Contributor Have you ever wondered what the grass under your feet feels, what an apple tree smells, or a marigold sees? 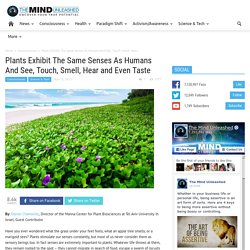 Plants stimulate our senses constantly, but most of us never consider them as sensory beings too. In fact senses are extremely important to plants. Plant-e.com Home. How Trees Calm Us Down. In 1984, a researcher named Roger Ulrich noticed a curious pattern among patients who were recovering from gallbladder surgery at a suburban hospital in Pennsylvania. 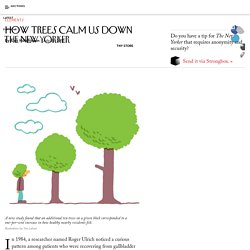 Those who had been given rooms overlooking a small stand of deciduous trees were being discharged almost a day sooner, on average, than those in otherwise identical rooms whose windows faced a wall. The results seemed at once obvious—of course a leafy tableau is more therapeutic than a drab brick wall—and puzzling. Whatever curative property the trees possessed, how were they casting it through a pane of glass? That is the riddle that underlies a new study in the journal Scientific Reports by a team of researchers in the United States, Canada, and Australia, led by the University of Chicago psychology professor Marc Berman.

Researcher: Psychedelic Plants are Trying to Communicate with Humans. Derrick Broze April 16, 2015 (ANTIMEDIA) From April 10 to April 12, activists, journalists, researchers, and whistleblowers gathered in Philadelphia for the Free Your Mind Conference. 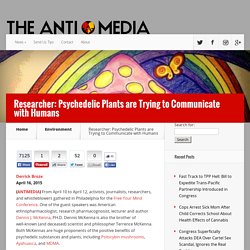 One of the guest speakers was American ethnopharmacologist, research pharmacognosist, lecturer and author Dennis J. McKenna, PH.D. Plant Internet Is A Real Thing. Video: Do Bean Plants Show Intelligence? The Intelligent Plant. Plants Respond to Leaf Vibrations Caused by Insects’ Chewing, MU Study Finds. Plants Can 'Talk' To Each Other by Clicking Their Roots. Photo via Shutterstock Watch what you say around your houseplants — they can probably hear you, and they might even be talking about you. 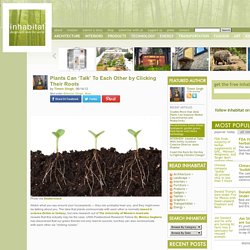 The idea that plants communicate with each other is normally based in science-fiction or fantasy, but new research out of The University of Western Australia reveals that this actually may be the case. UWA Postdoctoral Research Fellow Dr. Amazing Plants. Researchers find electrical current stemming from plants. In an electrifying first, Stanford scientists have plugged into algae cells and harnessed a tiny electrical current. 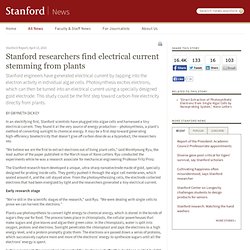 They found it at the very source of energy production – photosynthesis, a plant's method of converting sunlight to chemical energy. It may be a first step toward generating high-efficiency bioelectricity that doesn't give off carbon dioxide as a byproduct, the researchers say. "We believe we are the first to extract electrons out of living plant cells," said WonHyoung Ryu, the lead author of the paper published in the March issue of Nano Letters. Ryu conducted the experiments while he was a research associate for mechanical engineering Professor Fritz Prinz.

The Stanford research team developed a unique, ultra-sharp nanoelectrode made of gold, specially designed for probing inside cells. Early research stage. Plant communications: Beans’ talk. Plants Recognize Siblings: ID System In Roots. Plants may not have eyes and ears, but they can recognize their siblings, and researchers at the University of Delaware have discovered how. 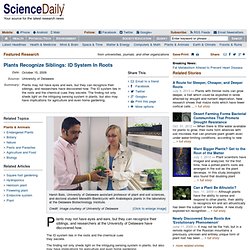 The ID system lies in the roots and the chemical cues they secrete. The finding not only sheds light on the intriguing sensing system in plants, but also may have implications for agriculture and even home gardening. The study, which is reported in the scientific journal Communicative & Integrative Biology, was led by Harsh Bais, assistant professor of plant and soil sciences at the University of Delaware. Plants Know Their Relatives — And Like Them! - Wired Science. Unlike many human brothers and sisters, plant siblings appear to do their best to get along, sharing resources and avoiding competition.

In a study of more than 3,000 mustard seedlings, scientists discovered that the young plants recognize their siblings — other plants grown from the seeds of the same momma plant — using chemical cues given off during root growth. And it turns out mustard plants won’t compete with their brethren the way they will with strangers: Instead of rapidly growing roots to suck up as much water and minerals as possible, plants who sensed nearby siblings developed a shallower root system and more intertwined leaves. “It’s possible that when kin are grown together, they may balance their nutrient uptake and not be greedy,” plant biologist Harsh Bais of the University of Delaware said in a press release.

The work will be published in an upcoming issue of Communicative and Integrative Biology.