.@guardian ran a superb story on a “women’s pastime” practised by Queen Victoria called ‘seaweeding’. It spread from the UK to California &amp; now the samples are providing a glimpse into history. It mentions Linnaeus: “The practice of pressing seaweed dates back to the 18th-century Swedish botanist Carl Linnaeus, who founded modern taxonomy, but it exploded during the natural history boom of Victorian Britain.” So we can’t help but share some of o. What Victorian-era seaweed pressings reveal about our changing seas. Treasure of the Month: John Stackhouse’s Nereis Britannica (1795-1801) Visions of Algae in Eighteenth-Century Botany. Although not normally considered the most glamorous of Mother Nature’s offerings, algae has found itself at the heart of many a key moment in the last few hundred years of botanical science. 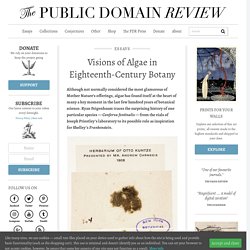 Ryan Feigenbaum traces the surprising history of one particular species — Conferva fontinalis — from the vials of Joseph Priestley’s laboratory to its possible role as inspiration for Shelley’s Frankenstein. Algae are rarely thought of as remarkable plants, when and if they’re thought of at all.1 Attitudes seemingly haven’t changed all that much since the eighteenth century; people were as blasé about algae then as they are now. Given such an unremarkable status, it is surprising to find that a single species of algae managed to catalyze major eighteenth-century discoveries concerning photosynthesis and embryogenesis, especially in light of the fact that the naturalists responsible for these discoveries only stumbled upon this alga while looking for something else entirely.

Neither Sought Nor Seen.

Art. Collections. Diatoms. Uses. Are You Wearing Seaweed? Book of Botanical Speciman's - Marine Algae Chlorospermeae by Charles Morrison - Victorian Collections. A window into the world of seaweeds. Algae: the final frontier. Blog - Get Involved - Horniman Museum and Gardens. In celebration of World Book Day on 2 March 2017, Gill Poole shows us some of the fascinating books in the Horniman Library. 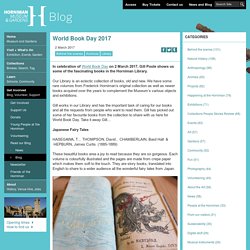 Our Library is an eclectic collection of books, old and new. We have some rare volumes from Frederick Horniman’s original collection as well as newer books acquired over the years to complement the Museum’s various objects and exhibitions. Gill works in our Library and has the important task of caring for our books and all the requests from people who want to read them. Gill has picked out some of her favourite books from the collection to share with us here for World Book Day. Take it away Gill… Japanese Fairy Tales. Seaweed album appeal. Can you help us find more about our seaweed collector? 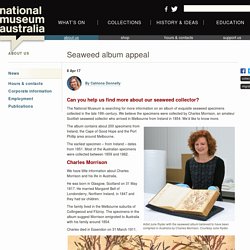 The National Museum is searching for more information on an album of exquisite seaweed specimens collected in the late 19th century. We believe the specimens were collected by Charles Morrison, an amateur Scottish seaweed collector who arrived in Melbourne from Ireland in 1854. Big seaweed search guide. Botanique Atlas (1826) - Voyage autour du monde : If you are generating a PDF of a journal article or book chapter, please provide title and author information. 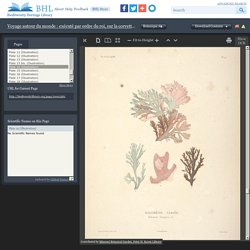 BHL stores this information to allow these articles to be indexed, searched and retrieved by other users. If you download an article but do not provide title or author information, these articles will be lost. Thank you for your request. Please wait for an email containing a link to download the PDF. For your reference, the confirmation number for this request is . Join Our Mailing List Sign up to receive the latest BHL news, content highlights, and promotions. Subscribe. An ocean time machine – Conservation & Science. The ocean keeps scrupulous records of its past: The comings and goings of myriad creatures, the evolving conditions they lived in, even details of who ate what. 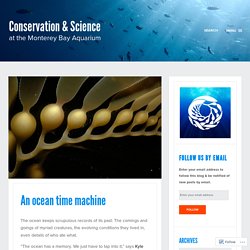 “The ocean has a memory. Confervae. The seaweed collector, a handy guide - James Shirley Hibberd. Nereis Britannica : continens species omnes Fucorum in insulis Britannicis crescentium iconibus illustratas : Stackhouse, John, 1742-1819. Details - Icones of Japanese algae. Sea mosses, a collector's guide and an introduction to the study of marine Algae. The Plan to Give Every Ocean Species a Genetic Barcode. An international team of scientists is on a mission to give every living species on earth a unique DNA “barcode” so that they can be easily identified. 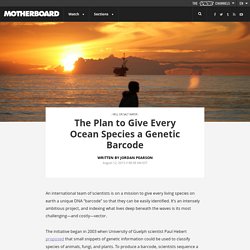 It’s an intensely ambitious project, and indexing what lives deep beneath the waves is its most challenging—and costly—vector. The initiative began in 2003 when University of Guelph scientist Paul Hebert proposed that small snippets of genetic information could be used to classify species of animals, fungi, and plants. To produce a barcode, scientists sequence a section of an animal’s DNA and give it a unique identifier. The idea is that the chosen segment of DNA is the same for all animals in a species, so comparing barcodes can identify animals when morphology—looking at physical characteristics—isn’t enough. SeaWeeds. Seaweeds are a fascinating and diverse group of organisms living in the earth's oceans. 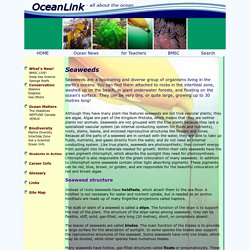 You can find them attached to rocks in the intertidal zone, washed up on the beach, in giant underwater forests, and floating on the ocean's surface. They can be very tiny, or quite large, growing up to 30 metres long! Although they have many plant-like features seaweeds are not true vascular plants; they are algae. Algae are part of the Kingdom Protista, which means that they are neither plants nor animals. Seaweeds are not grouped with the true plants because they lack a specialized vascular system (an internal conducting system for fluids and nutrients), roots, stems, leaves, and enclosed reproductive structures like flowers and cones. Seaweed structure. Biggest algae bloom in history hits Lake Erie - and it is large enough to cover New York City. Bloom that covered Lake Erie surpassed record-setting outbreak in 2011Scum covered an area the size of New York CityAlgae stayed away from shoreline, sparing boats and plants By Associated Press and Stacy Liberatore For Dailymail.com Published: 17:27 GMT, 11 November 2015 | Updated: 19:32 GMT, 11 November 2015 A massive algae bloom on Lake Erie has reached historic proportions - and is big enough to cover New York City. 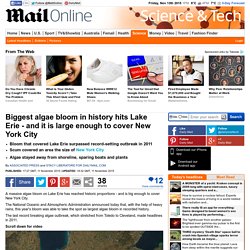 The National Oceanic and Atmospheric Administration announced today that, with the help of heavy rains, this year's bloom was able to take the spot as largest algae bloom in recorded history. Decrease in Phytoplankton. Image: Gordon T. 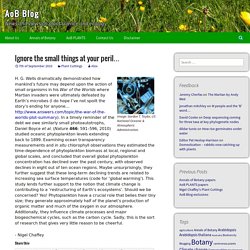 Taylor, US National Oceanic & Atmospheric Administration. H. G. Aquatic Invasives Home. One of the greatest threats to the health of North America's Great Lakes is invasion by exotic species, several of which already have had catastrophic impacts on property values, the fisheries, shipping, and tourism industries, and continue to threaten the survival of native species and wetland ecosystems. 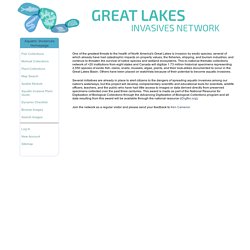 This bi-national thematic collections network of >20 institutions from eight states and Canada will digitize 1.73 million historical specimens representing 2,550 species of exotic fish, clams, snails, mussels, algae, plants, and their look-alikes documented to occur in the Great Lakes Basin. Modelling the biogeography of Antarctic phytoplankton - ePIC. Marine pelagic diatoms are coined to be strong drivers of the Southern Ocean silicate pump. Their growth and sinking dynamics substantially affect silicate supply in lower latitude surface water masses of the world ocean. We have explored the use of species distribution modeling (SDM) to investigate the potential responses of a few key diatom species to climate change.

These models describe the response of a species to its environment by combining occurrence and environmental data using statistical or machine learning approaches. Subsequently, the species’ potential distribution is mapped by projecting the model on gridded environmental layers, also for future scenarios. A mini-mesh plant: Red Algae.