“There are more species of fungi, bacteria, and protozoa in a single scoop of soil than there are species of plants and vertebrate animals in all of North America.

And of these, fungi are the grand recyclers of our planet, the mycomagicians disassembling large organic molecules into simpler forms, which in turn nourish other members of the ecological community. Fungi are the interface organisms between life and death.”
― Paul Stamets, Mycelium Running: How Mushrooms Can Help Save the World. Fungi in the Ancient World. Frank Dugan sifts the evidence, separates hype and hyperbole from factual and plausible events, and conclusively demonstrates that fungi have strongly influenced western civilization from its very beginnings. 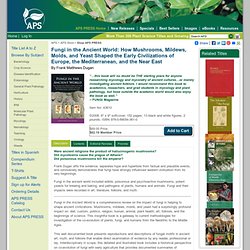 Fungi in the ancient world included edible, poisonous and psychoactive mushrooms, potent yeasts for brewing and baking, and pathogens of plants, humans and animals. Fungi and their impacts were recorded in art, literature, folklore, and myth. Fungi in the Ancient World is a comprehensive review on the impact of fungi in helping to shape ancient civilizations. PDF of Mushrooms Russia and History. Filters and Reflections Perspectives on Reality Zachary Jones, Brenda Dunne, Elissa Hoeger, Robert Jahn, editors ICRL Press, NJ. 2009 We respectfully submit this recent publication by the ICRL, a friend of our site. 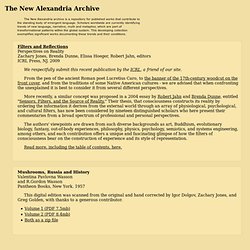 From the pen of the ancient Roman poet Lucretius Caro, to the banner of the 17th-century woodcut on the front cover, and from the traditions of some Native American cultures - we are advised that when confronting the unexplained it is best to consider it from several different perspectives. Descriptions of Fungi and Bacteria. 4.12: Nutritional value of fungi. 4.12 The real nutritional value of fungi (contributed by Stephanie Ingram, 2002) Abstract Fungi have been influencing human affairs for thousands of years, whether as a direct food source, as a medicine, or in a food process [1]. 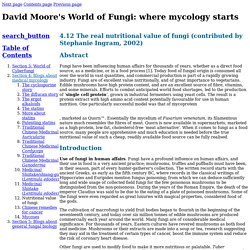 Today food of fungal origin is consumed all over the world in vast quantities, and commercial production is part of a rapidly growing industry. David Moore's World of Fungi: where mycology starts. Hungry for fungi: green mycoheterotrophic plants are far more common than previously thought. A surprising number of plants snack on fungi as well as sunshine. 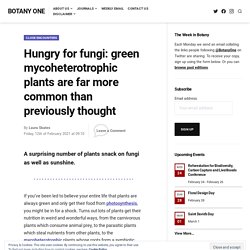 If you’ve been led to believe your entire life that plants are always green and only get their food from photosynthesis, you might be in for a shock. Turns out lots of plants get their nutrition in weird and wonderful ways, from the carnivorous plants which consume animal prey, to the parasitic plants which steal nutrients from other plants, to the mycoheterotrophic plants whose roots form a symbiotic relationship with fungi belowground. These kinds of plants are often thought of as rare or unusual oddities, but in a recent paper by Giesemann and colleagues have found that, actually, there are way more mycoheterotrophic plants out there than we’ve ever thought before. They say that “prior knowledge on mycoheterotrophy appears to just graze the surface of something much bigger…”

Fungi, Folklore, and Fairyland. Despite its ubiquity, and occasional and tentative association with nature spirits, the mushroom that became the distinctive motif of fairyland was not the liberty cap but rather the spectacular red-and-white fly agaric (Amanita muscaria). 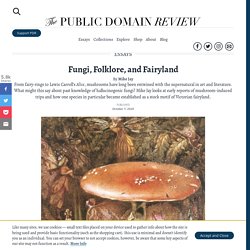 The fly agaric is psychoactive but unlike the liberty cap, which delivers psilocybin in reliable doses, it contains a mix of alkaloids — muscarine, muscimol, ibotenic acid — which generate an unpredictable and toxic cocktail of effects. These can include wooziness and disorientation, drooling, sweats, numbness in the lips and extremities, nausea, muscle twitches, sleep, and a vague, often retrospective sense of liminal consciousness and waking dreams. The Secret Lives of Fungi. In 1957, a man from New York named R. 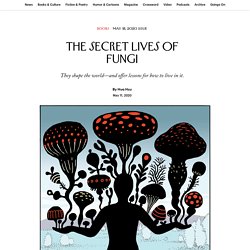 Gordon Wasson published an article in Life about two trips he had taken, three decades apart. The first was to the Catskills, in New York, where his wife, Valentina, took a rambling walk in the woods and became enamored of some wild mushrooms. Books by Paul Stamets (Author of Mycelium Running) Paul Stamets Quotes (Author of Mycelium Running) State of the World's Fungi 2018.

On the Hunt for Unloved, Unstudied, Yet Super Important Lichen. We arrive at Cupsogue Beach, near the eastern tip of Long Island, in the foggy morning after a long drive from Manhattan. 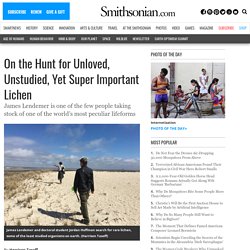 After an hour scouring the dune scrub, there is no sign of what we’re looking for. “This is the unglamorous job of trying to find something that’s rare,” says James Lendemer, a lichenologist at the New York Botanical Garden in the Bronx. We’re searching for Cladonia submitis, more commonly known as “beach broccoli” — though “commonly known” might be generous. It’s an apparently rare lichen with a restricted range between New Jersey and Rhode Island. Cupsogue Beach, in the town of Brookhaven, is the first of three stops on our daylong trip to document where the lichen still lives.