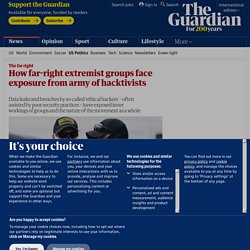 The data has been exfiltrated in breaches engineered by so-called “ethical hackers” – often assisted by poor security practices from website administrators – and by activists who have penetrated websites in search of data and information. Experts and activists say that attacks on their online infrastructure is likely to continue to disrupt and hamper far-right groups and individuals and makes unmasking their activities far more likely – often resulting in law enforcement attention or loss of employment. Antarctic bacteria live on air and make their own water using hydrogen as fuel. Humans have only recently begun to think about using hydrogen as a source of energy, but bacteria in Antarctica have been doing it for a billion years. 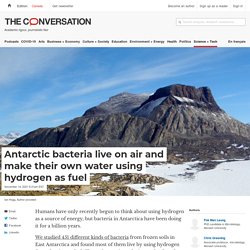 We studied 451 different kinds of bacteria from frozen soils in East Antarctica and found most of them live by using hydrogen from the air as a fuel. Through genetic analysis, we also found these bacteria diverged from their cousins in other continents approximately a billion years ago. These incredible microorganisms come from ice-free desert soils north of the Mackay Glacier in East Antarctica. Few higher plants or animals can prosper in this environment, where there is little available water, temperatures are below zero, and the polar winters are pitch-black. Despite the harsh conditions, microorganisms thrive. When Did Photosynthesis Begin? Sometime around 2.4 billion years ago, a nascent planet Earth underwent one of the most dramatic changes in its history. 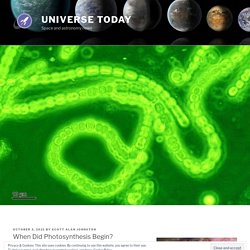 Known as the Great Oxidation Event, this period saw Earth’s atmosphere suddenly bloom with (previously scarce) molecular oxygen. The rapid alteration of the atmosphere’s composition was nothing short of a cataclysm for some early lifeforms (at the time, mostly simple celled prokaryotes). Anaerobic species – those that dwell in oxygen-free environments – experienced a near extinction-level event. But the Great Oxidation was also an opportunity for other forms of life to thrive. 2.5 billion-year-old traces of life locked inside primeval ruby. Traces of ancient life were locked inside a 2.5 billion-year-old ruby from Greenland, according to a new study. 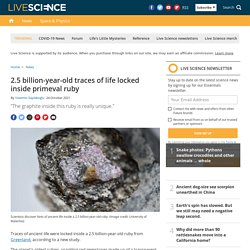 The planet's oldest rubies, sparkling red gemstones made up of a transparent red mineral called corundum, are found in Greenland. While searching for rubies in the North Atlantic Craton of southern Greenland, a group of researchers discovered a hidden surprise in one of them: graphite, a pure form of carbon, that may be the remains of ancient microbial life. 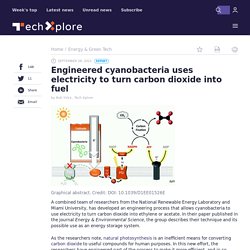 In their paper published in the journal Energy & Environmental Science, the group describes their technique and its possible use as an energy storage system. As the researchers note, natural photosynthesis is an inefficient means for converting carbon dioxide to useful compounds for human purposes. In this new effort, the researchers have engineered part of the process to make it more efficient, and in so doing have developed a new way to store energy. Scientists have divided natural photosynthesis into two main systems, photosystem I and photosystem II. Zeroing in on the origins of Earth’s “single most important evolutionary innovation” Some time in Earth’s early history, the planet took a turn toward habitability when a group of enterprising microbes known as cyanobacteria evolved oxygenic photosynthesis — the ability to turn light and water into energy, releasing oxygen in the process. 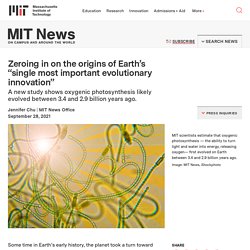 This evolutionary moment made it possible for oxygen to eventually accumulate in the atmosphere and oceans, setting off a domino effect of diversification and shaping the uniquely habitable planet we know today. Now, MIT scientists have a precise estimate for when cyanobacteria, and oxygenic photosynthesis, first originated. Their results appear today in the Proceedings of the Royal Society B. They developed a new gene-analyzing technique that shows that all the species of cyanobacteria living today can be traced back to a common ancestor that evolved around 2.9 billion years ago. Cyanobacteria engineered to accept external electricity turn carbon dioxide into fuel. Blue-green algae key to unlocking secrets of ancient past. 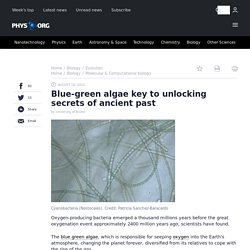 The blue green algae, which is responsible for seeping oxygen into the Earth's atmosphere, changing the planet forever, diversified from its relatives to cope with the rise of the gas. To understand how oxygen shaped early life, scientists at the University of Bristol have been investigating when cyanobacteria evolved and when they began using antioxidants called superoxide dismutase enzymes (SODs) to manage reactive oxygen.

They devised a 'molecular clock' using geochemical records, cyanobacteria fossils and genetic information to create a timeline of events. Improving Photosynthesis in Crops To Boost Yields. In order to feed a projected 9 billion people by 2050, farmers need to grow 50% more food on a limited amount of arable land. 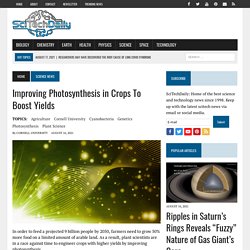 As a result, plant scientists are in a race against time to engineer crops with higher yields by improving photosynthesis. Blue-green algae (cyanobacteria) are known to photosynthesize more efficiently than most crops, so researchers are working to put elements from cyanobacteria into crop plants. Lake Huron sinkhole surprise: The rise of oxygen on early Earth linked to changing planetary rotation rate. The rise of oxygen levels early in Earth's history paved the way for the spectacular diversity of animal life. 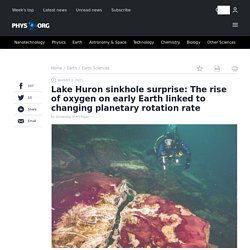 But for decades, scientists have struggled to explain the factors that controlled this gradual and stepwise process, which unfolded over nearly 2 billion years. Now an international research team is proposing that increasing day length on the early Earth—the spinning of the young planet gradually slowed over time, making the days longer—may have boosted the amount of oxygen released by photosynthetic cyanobacteria, thereby shaping the timing of Earth's oxygenation. New Insight Into Biosynthesis: How Cyanobacteria Evolve Their Photosynthetic Machinery. Illustration of the cyanobacterial thylakoid membrane. 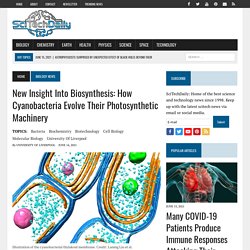 Credit: Luning Liu et al. A new study conducted by the researchers at the University of Liverpool reveals how the ancient photosynthetic organisms – cyanobacteria – evolve their photosynthetic machinery and organize their photosynthetic membrane architecture for the efficient capture of solar light and energy transduction. How "Great" Was the Great Oxygenation Event? Enzyme "Family Tree" Reveals When Organisms First Started Using Oxygen. Banded iron deposits like these contain clues to the Great Oxygenation Event. Credit: Weizmann Institute of Science A look at enzyme evolution suggests life figured out how to use oxygen long before the main event.

Oxygen-Generating Cyanobacteria Powered by Upconversion-Nanoparticles-Converted Near-Infrared Light for Ischemic Stroke Treatment. Stroke is one of most common causes of death and disability. Most of neuroprotective agents fail to rescue neurons from cerebral ischemic insults, mainly because of targeting downstream cascading events, such as excitotoxicity, oxidative and nitrosative stress, and inflammation, rather than improving hypoxia that initially occurs. Here, we report a near-infrared light (NIR)-driven nanophotosynthesis biosystem capable of generating oxygen and absorbing carbon dioxide, thus rescuing neurons from ischemia toward treating stroke.

Scytonemin - an overview. 3.3 Photoprotective Compounds During the last two decades, the use of natural photoprotective compounds has gained much attention considering the safety concerns as several synthetic sunscreen compounds show toxicity and are prone to photodegradation (Serpone et al., 2007). Cyanobacteria produce a vast array of photoprotective compounds/pigments which are now widely used in the formulation of cosmetics, the sole aim being to reduce the risks of skin cancer and aging.

Of these, mycosporine-like amino acids (MAAs), scytonemin, and carotenoids are the most common and reported from several species of cyanobacteria especially those exposed to abiotic stresses including high doses of UV radiation (Rastogi and Sinha, 2009; Gao and Garcia-Pichel, 2011). MAAs are a diverse group of colorless, water soluble, and low molecular weight compounds (< 400 Da) which dissipate energy as heat without generating reactive oxygen species (ROS).

Cyanosite For Cyanobacteria, The Blue-green Algae. Cyanobacteria could revolutionize the plastic industry. Cyanobacteria produce plastic naturally as a by-product of photosynthesis—and they do it in a sustainable and environmentally friendly way. Researchers at the University of Tübingen have now succeeded for the first time in modifying the bacteria's metabolism to produce this natural plastic in quantities enabling it to be used industrially. This new plastic could come to compete with environmentally harmful petroleum-based plastics.