Vaginal Vs Clitoral Orgasm: The Female Orgasm Debate. Vaginal Vs. 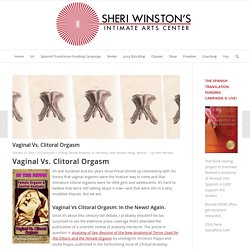 Clitoral Orgasm It’s one hundred and ten years since Freud stirred up controversy with his theory that vaginal orgasms were the ‘mature’ way to come and that immature clitoral orgasms were for little girls and adolescents. It’s hard to believe that we’re still talking about it now—and that we’re still in a very muddled dispute. But we are. Vaginal Vs Clitoral Orgasm: In the News!

Since it’s about this century-old debate, I probably shouldn’t be too surprised to see the extensive press coverage that’s attended the publication of a scientific review of anatomy literature. In today’s blog, I’ll focus on the vaginal vs. clitoral orgasm argument. 5 Women Share How They Found G-Spot for 1st Time.

Few areas of the female anatomy are as elusive—and as highly sought after—as the G-spot. 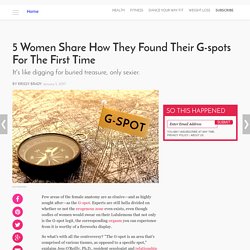 Experts are still hella divided on whether or not the erogenous zone even exists, even though oodles of women would swear on their Lululemons that not only is the G-spot legit, the corresponding orgasm you can experience from it is worthy of a fireworks display. So what's with all the controversy? "The G-spot is an area that's comprised of various tissues, as opposed to a specific spot," explains Jess O'Reilly, Ph.D., resident sexologist and relationship expert for Astroglide. Because it's not an anatomical entity that can be extracted from the body, the legitimacy of its existence continues to be hotly debated in the scientific community. Hysteria, Witches, and The Wandering Uterus: A Brief History. I teach “The Yellow Wallpaper” because I believe it can save people. 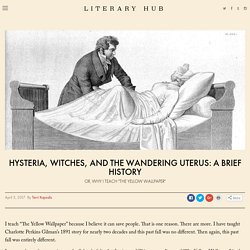 That is one reason. There are more. I have taught Charlotte Perkins Gilman’s 1891 story for nearly two decades and this past fall was no different. Then again, this past fall was entirely different. In our undergraduate seminar at the School of the Art Institute of Chicago, we discussed “The Yellow Wallpaper” in the context of the nearly 4,000-year history of the medical diagnosis of hysteria. The course is titled “The Wandering Uterus: Journeys through Gender, Race, and Medicine” and gets its name from one of the ancient “causes” of hysteria. 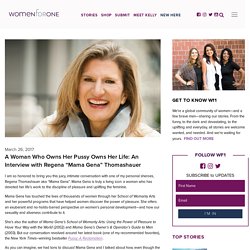 Mama Gena is truly a living icon: a woman who has devoted her life’s work to the discipline of pleasure and uplifting the feminine. Is There Something Wrong With Me? How To Have a Healthier Relationship With Your Sexuality. Holistic Hormonal Health – Natural effective birth control using fertility awareness. What Women Really Think about during Oral Sex. Get elephant's newsletter Act I Okay, here we go! 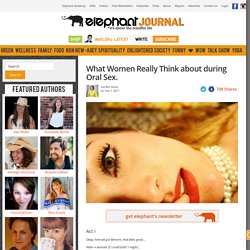 Mmmm, that feels good… Wait—I wonder if I smell bad? Are Jade Eggs Dangerous? Why I Agree With An Ob-Gyn To Use Caution – Saida Desilets. You’re excited. 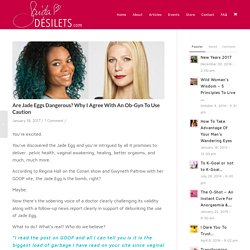 You’ve discovered the Jade Egg and you’re intrigued by all it promises to deliver: pelvic health, vaginal awakening, healing, better orgasms, and much, much more. According to Regina Hall on the Conan show and Gwyneth Paltrow with her GOOP site, the Jade Egg is the bomb, right? Maybe. How Women Can Benefit From Sex Rehab. What is painfully true is that as you age, if you give up on sex, then sex will give up on you. 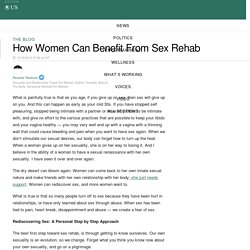 And this can happen as early as your mid 30s. If you have stopped self pleasuring, stopped being intimate with a partner or have no partner to be intimate with, and give no effort to the various practices that are possible to keep your libido and your vagina healthy — you may very well end up with a vagina with a thinning wall that could cause bleeding and pain when you want to have sex again. When we don’t stimulate our sexual desires, our body can forget how to turn up the heat. Why Can't I Orgasm? 5 Possible Reasons You're Not Getting Off As Much As You'd Like. As women, we're often taught that our bodies and our orgasms are very complicated and mysterious. 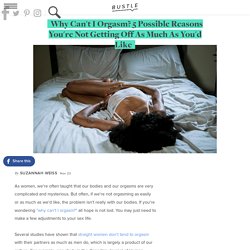 But often, if we're not orgasming as easily or as much as we'd like, the problem isn't really with our bodies. If you're wondering "why can't I orgasm? " all hope is not lost. You may just need to make a few adjustments to your sex life. How Women Are Enjoying Their Own Sexual Renaissance. Women learn about sex through the eyes of the world around them. 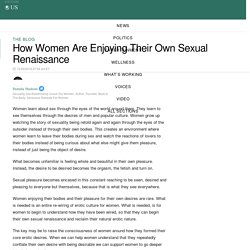 They learn to see themselves through the desires of men and popular culture. Women grow up watching the story of sexuality being retold again and again through the eyes of the outsider instead of through their own bodies. This creates an environment where women learn to leave their bodies during sex and watch the reactions of lovers to their bodies instead of being curious about what else might give them pleasure, instead of just being the object of desire. What becomes unfamiliar is feeling whole and beautiful in their own pleasure. Instead, the desire to be desired becomes the orgasm, the fetish and turn on. Sexual pleasure becomes encased in this constant reaching to be seen, desired and pleasing to everyone but themselves, because that is what they see everywhere.

With Nicole Jardim and Nat Kringoudis. OMGYes.com - women’s pleasure demystified. Modern Manual Therapy Blog. This blog was originally found at Specialist Pain PhysioRecently I gave a talk to a group of female health professionals at the Inspiring Women in Medicine meeting entitled ‘Women in pain’. 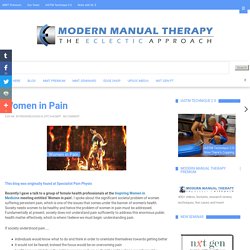 I spoke about the significant societal problem of women suffering persistent pain, which is one of the issues that comes under the banner of women’s health. Society needs women to be healthy and hence the problem of women in pain must be addressed. Fundamentally at present, society does not understand pain sufficiently to address this enormous public health matter effectively, which is where I believe we must begin: understanding pain. If society understood pain…. 5 Things French Women Know About Sex and Seduction. Get elephant's newsletter Is it just me or are French women a knowledgeable bunch? For instance, how about the following accomplishments: How to eat rich food without gaining an ounce. How to look glamorous when shopping for bread. How to raise children who eat all their dinner.

I get it! I used to feel the same way. Your Pussy’s Best Kept Secret (Warning: This Might Freak You Out) About Me Elise Savaresse is a Conscious Sexuality Coach, she is also the creator of The Self Pleasure Revolution which is a movement that support women let go of any fear, guilt and shame around their own sexuality. She is passionate about living the juiciest life ever and helping women reconnect with themselves and with the deeper knowing that lay in their body is one of her greatest joy. She loves exploring the frontier of her own body and together with women unravelling the wisdom of the divine feminine. 7 Myths About Women and Masturbation It's Time to Unlearn Right Now.