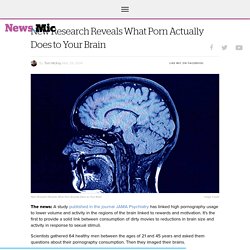 Many — if not most — people now catch late-night clips on their phones on the way to work or at their desks once you're there. That's because recaps and shares of videos from Stephen Colbert, Jimmy Fallon, Trevor Noah and Samantha Bee — among other trusted names in news — have come to dominate morning feeds and daily conversations. With the rise of social media and ubiquitous broadband video, anytime late-night TV has become an essential component of millennials' online diet. The Tonight Show Starring Jimmy Fallon on NBC and Jimmy Kimmel Live on ABC bring in millions of viewers a week, according to Nielsen, but the creators and producers know that ratings no longer accurately reflect how many people are watching. This Is What Happens When Kids Grow Up On Unlimited Access To Pornography. 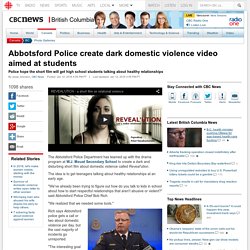 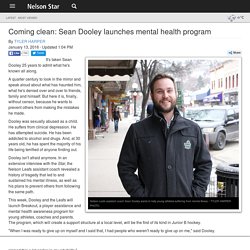 A quarter century to look in the mirror and speak aloud about what has haunted him, what he's denied over and over to friends, family and himself. But here it is, finally, without censor, because he wants to prevent others from making the mistakes he made. Dooley was sexually abused as a child. Student Services. Etsy Crafted Up Their Own Sign To Make Their Bathrooms Gender Neutral. In true Etsy fashion, the popular online marketplace DIY-ed their own bathroom sign to make their head office more trans-inclusive. 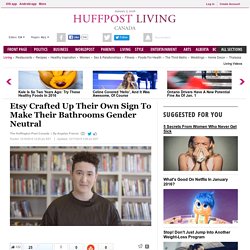 New York, like many states in the U.S., mandates that public restrooms indicate whether they are designated for men or women. While it’s not illegal to use the restroom of your choice, it may still be a difficult decision. The Brooklyn-based company kept the mandatory gender symbols, but added an Etsy-orange plaque that outshines the gendered signs, and makes clear which room to use. The sign reads: “While the law requires gender binary signs on the doors, we believe that gender is not binary. Please use the restroom that feels most comfortable for you.” One of their software engineers, Sara Bee, tweeted the photo last week. Above the sign, there is also a sticker from the campaign “It Was Never A Dress” — it was a cape — which was geared toward transforming perceptions of women.

Upworthy. Men and women are different, but not because of what's inside our brains. A n... Have you ever heard that women are "hardwired" to have better memories? 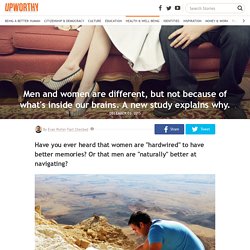 Or that men are "naturally" better at navigating? Men: born explorers? Photo via iStock. Sure, they're just stereotypes, but they're coming from somewhere. And for a long time we've been led to believe that men's and women's brains are fundamentally different, so why couldn't blanket statements like these hold some truth? This magical button delivers Upworthy stories to you on Facebook: Neuroscientist Gina Rippon, a professor at Aston University and noted speaker on the subject of sex differences, offered a different idea in 2014.

Now, a new study says she might be right. MakingSpace full. 26289E. 26288E. Trans Connect Movie - "Rural Transcapes" Rural Transcapes is a topical film that profiles four transgendered individuals who have chosen to live in the rural area of the Kootenays. 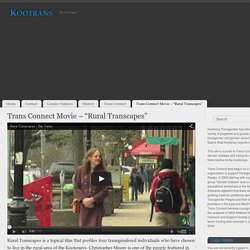 Christopher Moore is one of the people featured in the film and is the founder of the TransConnect Program, which provides outreach services to transgendered folks around the East and West Kootenays. Amy Bohigian of Watershed Productions was asked by Christopher last year to create an educational tool and the result is this 30 minute film, which delves into the difficult and inspiring stories of courage and authenticity.

The film also features Dr. History & Film. The life-saving, life-affirming work of The Trevor Project springs from the powerful intersection of storytelling on stage and film. 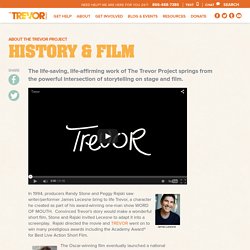 In 1994, producers Randy Stone and Peggy Rajski saw writer/performer James Lecesne bring to life Trevor, a character he created as part of his award-winning one-man show WORD OF MOUTH. Convinced Trevor's story would make a wonderful short film, Stone and Rajski invited Lecesne to adapt it into a screenplay. Rajski directed the movie and TREVOR went on to win many prestigious awards including the Academy Award® for Best Live Action Short Film. The Oscar-winning film eventually launched a national movement. 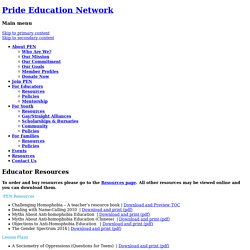 All other resources may be viewed online and you can download them. PEN Resources. A music video by rebecca drysdale. Kootenay Transgender. SexualityandU. SexualityandU. Sex Education For The Real World. Kids Help Phone. Options for Sexual Health. Castlegar,%20Trail. Home. Sexual health is an important part of your overall physical, mental and emotional health. 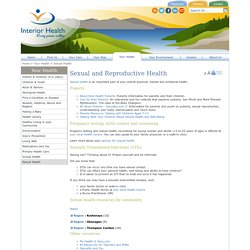 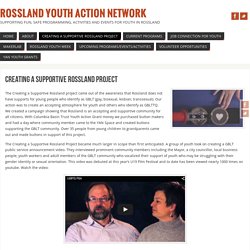 Our action was to create an accepting atmosphere for youth and others who identify as GBLTTQ. We created a campaign showing that Rossland is an accepting and supportive community for all citizens. With Columbia Basin Trust Youth Action Grant money we purchased button makers and had a day where community member came to the YAN Space and created buttons supporting the GBLT community.

Teen Texting - Harassment PSA. If You're Dating Someone And You Get This Phone Call, Run — Don't Walk — Away. Most Parents Support the New Sex Ed Curriculum - With Good Reason  The uproar over Ontario's updated sexual education curriculum has now gone way over the top, with some parents pulling their kids out of school in protest.

I respect the right of these parents to make their views known and to pull their kids out of school when sexual health curriculum is discussed in class. I oppose the attempt to axe the whole curriculum so that my child and the children of most Ontario parents, who support the curriculum, can't benefit from it either. The misinformation about the new curriculum rivals the inaccuracies kids get about sex from their friends and our culture. Some parents are convinced that their kids will be asked to touch themselves at school. The actual curriculum stresses respecting yourself and respecting others. These concerned parents are well-meaning. In Grades 1-3, Ontario kids will be taught the correct names for body parts, as opposed to "wee-wee" or "down there.

" I have taken a parenting cue from an uncle who was a physician. The U.S. Close. Sex Ed That Turns Boys into Men — Bright. Each 90-minute session at WiseGuyz opens with what Spence calls “check-in,” which is a chance for the boys to talk about themselves and what’s going on. Check-in, said Spence, “can take a long time. Some of them really take advantage of that time to talk about some of the issues or the struggles they’re having.” The safe space that Spence cultivates is crucial to the program’s success. Haberland offered the following criteria for productive sessions: “Answering difficult questions, making sure your classroom is a safe space for LGTBQ teens so that they don’t feel harassed or bullied, and ensuring that the curriculum feels relevant to their needs.”

Tea Consent (Clean) Last Week Tonight with John Oliver: Sex Education (HBO) Here's what it'll look like if trans people aren't allowed to use the right bathroom. This is a man named Michael Hughes. Why is he in a women's restroom? Michael is protesting a series of bills across the U.S. and Canada that, if passed, would ban men like him from using men's restrooms and leave him no choice but to use the women's room. Bizarrely, these laws have been proposed as a way to protect the privacy and safety of women.

(I know. It doesn't make sense, but hang with me.) Michael is a transgender man, meaning that when he was born, the doctor looked at him and labeled him a girl. Student Services. BCTF > Sexual Health Education. AHSV sexual health. CAVE Human Sexuality Training - Rossland - REACH. Home » CAVE Human Sexuality Training – Rossland When: June 10, 2015 @ 1:30 pm – 4:30 pm. Respect%20for%20Human%20Diversity. 5 Myths And Facts About Ontario's Updated Sex Education Curriculum  Yesterday I spent the day going over the newly released 2015 Ontario Health and Physical Education Curriculum (Elementary) with a fine-toothed comb to generate a comprehensive précis made up of every single quote that had anything to do with the "sex ed" parts.

Unfortunately, misconceptions and misinformation about this curriculum are continuing to make their way around the Internet, mostly because people seem bound and determined to willfully ignore the actual facts before forming an opinion. So today I'm going to address the most common myths about the new curriculum.