Hollaback! You have the power to end harassment 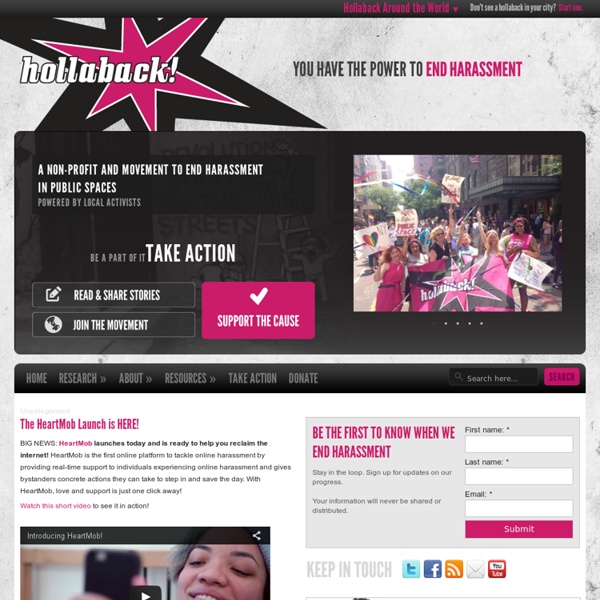 Radiotopia Library Solutions Leading, Learning and Linking Through conversations with hundreds of librarians about Linked Data in Libraries and the purpose and promise of BIBFRAME, we at Zepheira have heard three key themes: Awareness and EducationAssessment and Planning (request more information)Action and Exploration In response to these themes, Zepheira now provides several Linked Data and BIBFRAME services focused on Libraries. Linked Data and BIBFRAME Practical Practitioner Training Our Linked Data in Libraries and BIBFRAME training curriculum is a modular self-paced series where attendees progress through the courses with a cohort of other information professionals and interact with the Zepheira instructors and team. Linked Data Readiness and Assessment The promise of moving library assets to become visible on the web is exciting. Libhub Initiative Packages For a limited time, we offer an Early Adopter Program for Academic Libraries, and an Experimenter Program for Public Libraries.

Get ready for the robot propaganda machine This article was taken from The WIRED World in 2015. Be the first to read WIRED's articles in print before they're posted online, and get your hands on loads of additional content by subscribing online. Humanity has been advancing the field of propaganda for as long as we've been at war or had political fights to win. But today, propaganda is undergoing a significant change based on the latest advances in the fields of big data and artificial intelligence. Over the past decade, billions of dollars have been invested in technologies that customise ads increasingly precisely based on individuals' preferences. Now this is making the jump to the world of politics and the manipulation of ideas. Some recent military experiments in computational propaganda indicate where this could be taking us. These stories will be nearly indistinguishable from those written by humans. This technology exploits the simple fact that we are much more impressionable than we think.

The woman who is trying to create a Netflix for books Chiki Sarkar hates being called a disruptor but that's exactly what she's doing to the opaque, incestuous world of Indian publishing. Along with Durga Raghunath, who brings the digital smarts, Sarkar has co-founded Juggernaut, a digital publishing house. She spoke to Neelam Raaj on why she wants to use tech to give dead-tree books a new lease of life You're pitching Juggernaut as India's first phone publisher. Did you have to rethink the book for the small screen? When the idea of Juggernaut first came to me in December 2014, I thought about what the phone can do that the book can't, and I thought Sunny Leone - delicious stories on the screen. Sunny will be appointment reading - one story on your mobile at 10pm every night for a week. What will be your physical vs digital mix? If we bring 100 books to digital, about 30 or 40 of those will have physical copies too. Do you see yourself as a disruptor in publishing? I hate this word. How did you get Sunny Leone to write erotica?

Sustainability As cities are growing denser, nature is greatly being reduced and parks are getting smaller. Not only is it a densification, but the cities are also growing out of its existing shell - appropriating its green edges and industrial areas for housing and continueously extending its borders. The horisontal surfaces are needed for buildings and logistics, but the vertical surfaces has great potential for addition of nature. Vision for the future Butong's contribution Biodiversity NOx & CO² Downloads butong@butong.eu