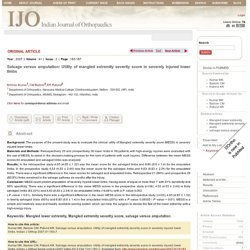 Human Maintains Homeostasis. Homeostasis is the process or system that gives living organisms the ability to maintain a stable set of conditions inside its body. 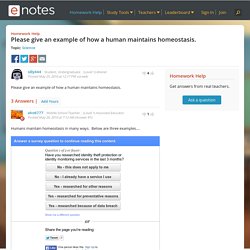 Animal need to maintain stable internal conditions such as body temperature, blood pressure, and the composition of body fluids. Homeostasis is their ability to do so. To maintain homeostasis, an organism reacts to its external environment by making internal adjustments. For example, when a person steps outside on a hot day, the body must adjust to the heat. Otherwise the body temperature would rise so high that serious damage to the body cells, and even death may occur. Olympic Overtures: Classical Music at the Games. Black Gospel Music Clef - Your Gospel Music Ministry Source. Top 10 Patriotic Songs. Patriotic songs can take many forms in the hands of our classic rock heroes. 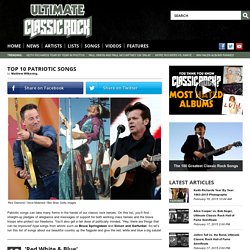 On this list, you’ll find straight-up pledges of allegiance and messages of support for both working class heroes and the brave troops who protect our freedoms. You’ll also get a fair dose of politically minded, “Hey, there are things that can be improved”-type songs from artists such as Bruce Springsteen and Simon and Garfunkel. So let’s run this list of songs about our beautiful country up the flagpole and give the red, white and blue a big salute! From 'Vicious Cycle' (2003) Johnny Van Zant, who has now fronted Lynyrd Skynyrd more than twice as long as his departed brother Ronnie, dryly notes in this ode to the American way that his hair's going white with age. From 'Sailor' (1968) From 'Born in the U.S.A.' (1984) Patriotic songs don't always have to be uplifting. Top 10 Olympic Games Songs. Sport From Diana Ross’ penalty-missing performance at the 1994 World Cup to Janet Jackson’s wardrobe malfunction at the 2004 Superbowl, the world of sport has always had a strong connection with the world of pop. 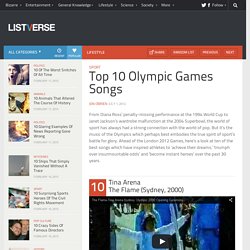 But it’s the music of the Olympics which perhaps best embodies the true spirit of sport’s battle for glory. Ahead of the London 2012 Games, here’s a look at ten of the best songs which have inspired athletes to ‘achieve their dreams,’ ‘triumph over insurmountable odds’ and ‘become instant heroes’ over the past 30 years. Tina Arena The Flame (Sydney, 2000) Featuring the obligatory key change, mass children’s choir and big-lunged glory note, “The Flame” may have adhered to every rule in the Olympic theme handbook, but was far superior to Sydney 2000’s other official anthems from teen idols Nikki Webster (the sickly sweet “We’ll Be One”) and Vanessa Amorosi (the Mariah-aping “Heroes Live Forever”). Prosthetics. March Vision - Troops & Prayers. Combat Vets Try Out Latest in Prosthetic Knee Design. Javier Sanchez. Houston Medical Center, Houston TX - Orthotics & Prosthetics - Hanger Clinic. 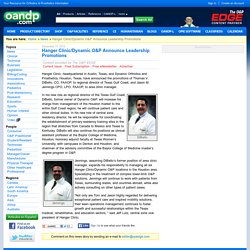 DiBello, CO, FAAOP, to regional director of Texas Gulf Coast, and Jason M. Jennings CPO, LPO, FAAOP, to area clinic manager. DiBello In his new role as regional director of the Texas Gulf Coast, DiBello, former owner of Dynamic O&P, will increase his charge from management of the Houston market to the entire Gulf Coast region; he will continue patient care and other clinical duties. In his new role of central zone residency director, he will be responsible for coordinating the establishment of primary residency training sites in the region that stretches from Canada to Mexico and Texas to Kentucky.