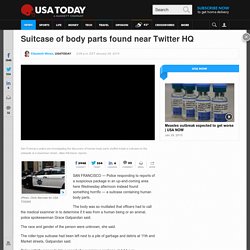 Jillian Kitchener reports. Video Transcript Automatically Generated Transcript (may not be 100% accurate) 00:01 Police say they were alerted to the presence of a 00:04 suspicious package in San Francisco's mission district on Wednesday afternoon. SAN FRANCISCO — Police responding to reports of a suspicious package in an up-and-coming area here Wednesday afternoon instead found something horrific — a suitcase containing human body parts. The body was so mutilated that officers had to call the medical examiner in to determine if it was from a human being or an animal, police spokeswoman Grace Gatpandan said. The race and gender of the person were unknown, she said. The roller-type suitcase had been left next to a pile of garbage and debris at 11th and Market streets, Gatpandan said.

Twitter Is Going To Start Tracking What Other Apps Are On Your Phone. Twitter is starting a new program called App Graph that tracks all of the other apps people have on their phones. 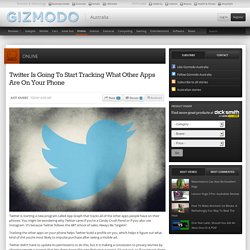 You might be wondering why Twitter cares if you’re a Candy Crush fiend or if you also use Instagram. It’s because Twitter follows the ABT school of sales: Always Be Targetin’. Ervinjuresa : How to get around... How to get around Turkey's Twitter ban. Since Turkey banned Twitter, almost 2.5m tweets have been posted from the country - around 17,000 tweets a minute. 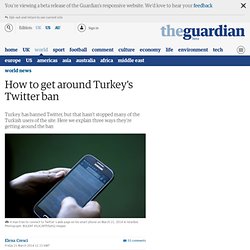 But how are Turkish users getting around the ban? Here are the three main ways Turkey is still tweeting despite their prime minister’s vow to “root out” the social network. The simplest way to circumvent the Twitter ban is to send tweets via SMS - a method suggested by Twitter’s policy team as news of the ban spread. According to Twitter’s support page, users can send and receive tweets through short codes associated with supported networks - in Turkey, these are Avea, Vodafone and Turkcell. Only Turkcell supports MMS, which means only users on this carrier will be able to send pictures with their tweets. 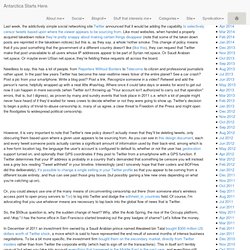 Last week, the addictively simple social networking site Twitter announced that it would be adding the capability to selectively censor tweets based upon where the viewer appears to be sourcing from. Like most websites, when handed a properly acquired takedown notice they're pretty snappy about making certain things disappear (note that some of the taken down posts are reprinted in the takedown notices) but this is, as they say, a whole 'nother smoke. This change of policy means that if you post something that the government of a different country doesn't like (like this), they can request that Twitter make that post unavailable to all users whose IP addresses appear to be part of Syrian net.space.

Or Saudi Arabian net.space. Or maybe even USian net.space, they're fielding these requests all across the board. So, the $50kus question is, why the sudden change of heart? Sues DHS Over Covert Surveillance of Facebook and Twitter. Sign in to Twitter. Shortened URL. HomeNewsFAQSoftwareDevelopersContact Shortened link The link you followed has been shortened with v.gd. 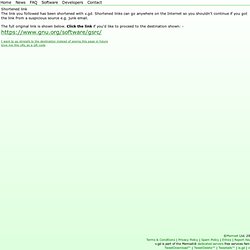 Shortened links can go anywhere on the Internet so you shouldn't continue if you got the link from a suspicious source e.g. junk email. The full original link is shown below. Click the link if you'd like to proceed to the destination shown: - I want to go straight to the destination instead of seeing this page in futureGive me this URL as a QR code Tip: some QR readers fail to read mixed case URLs properly. ©Memset Ltd. 2014Terms & Conditions | Privacy Policy | Spam Policy | Ethics | Report Abusev.gd is part of the Memset® dedicated servers free services family:TweetDownload™ | TweetDelete™ | Tweetails™ | is.gd | v.gd.