Beyond vanity metrics: 4 ways to track how your Tweets are performing. Twitter analytics should play an important role in your social media strategy. 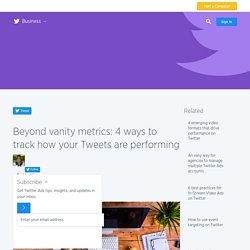 Here’s a closer look at how to dig deeper and go beyond vanity metrics to really understand how your Tweets are performing. Follow these strategies and incorporate them into the way you create, track, and plan your Tweets. Audience alignment. Twitter for dummies: a guide to the social network that still confuses us. Although Twitter has been part of the cultural and political discourse for years, a vast percentage of the population still doesn’t understand it. 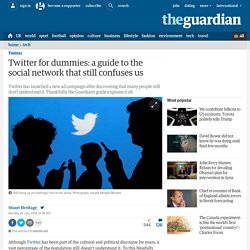 To this blissfully ignorant percentage, tweets are simply the thing that journalists embed on to websites whenever they don’t feel like coming up with their own ideas. However, today Twitter unveiled a brand new advertising campaign aimed exclusively at those who don’t know what Twitter is. Unfortunately, the commercials are so bland and empty that they’re almost certainly doomed to failure. Twitter account management: 9 mistakes to avoid. Emeric and I compiled this list of 9 mistakes we often see businesses make on Twitter. 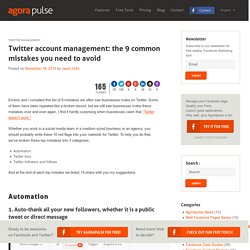 Some of them have been repeated like a broken record, but we still see businesses make these mistakes over and over again. I find it hardly surprising when businesses claim that “Twitter doesn’t work.” Twitter's New Profile Layout Is Here: What You Need to Know. Well, the rumors from February about a possible design overhaul of Twitter profile pages are officially no longer rumors. 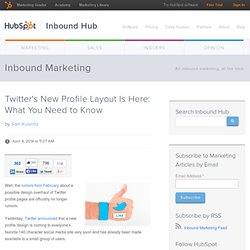 Yesterday, Twitter announced that a new profile design is coming to everyone's favorite 140 character social media site very soon and has already been made available to a small group of users. If you don't have the new layout yet, at some point in the next few weeks, you will likely log in to your Twitter account to find that your profile page has been replaced with the new page design. So, here's what you need to know about the new layout so your profile looks top-notch when the time comes. Note: If you’re new to Twitter, you will automatically start with the new profile when you create your account. New users are still walked through the same general process of building their account, so it's actually a great way to practice dealing with the new layout. Why Twitter Should Lose Its Special Symbols. There’s an irony to Twitter these days. 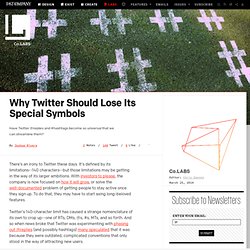 It's defined by its limitations--140 characters--but those limitations may be getting in the way of its larger ambitions. With investors to please, the company is now focused on how it will grow, or solve the well-documented problem of getting people to stay active once they sign up. To do that, they may have to start axing long-beloved features. Twitter's 140-character limit has caused a strange nomenclature of its own to crop up--one of RTs, DMs, @s, #s, MTs, and so forth. And so when news broke that Twitter was experimenting with phasing out @replies (and possibly hashtags) many speculated that it was because they were outdated, complicated conventions that only stood in the way of attracting new users. “They're doing what mature companies do,” says Ragy Thomas, founder and CEO of social media marketing platform Sprinklr. According to Thomas, social media has normalized around the concepts that @replies and hashtags were intended to represent. Photos just got more social. 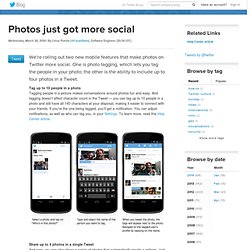 If you’re the one being tagged, you’ll get a notification. 8 ways to make Twitter your own. While #Twitter8 has come and gone, it’s not too late to give you a gift from us: a few best practices (eight, to be exact) that we hope are useful to even the most devout Twitter citizens. 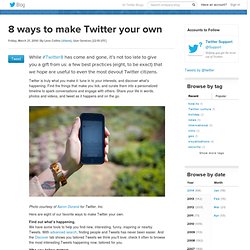 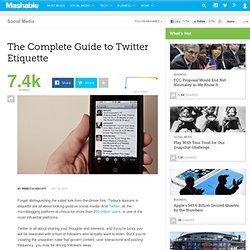 Today's lessons in etiquette are all about looking good on social media. And Twitter, as the microblogging platform of choice for more than 200 million users, is one of the most influential platforms. Telcos lead the way in responding to social media queries. 20% of Australians have made a complaint about a product or service on a companies Facebook site, according to research released by SocialPulse. 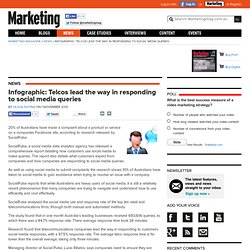 SocialPulse, a social media data analytics agency, has released a comprehensive report detailing how customers use social media to make queries. The report also details what customers expect from companies and how companies are responding to social media queries. The History of Twitter [INFOGRAPHIC] Twitter Data Maps Show How Interconnected Our World Really Is. Posted by Fox Van Allen on May 14, 2013 in Computers and Software , News , Internet & Networking , Blog , Social Networking :: 0 comments Twitter moves so fast that if you blink, you’re bound to miss something.

Each minute, an estimated 40,000 tweets are sent off blindly into world on the social network . Have you ever wondered where these tiny messages are coming from, or where they’re going? Some scientists at the University of Illinois did, leading them to create some stunning maps that appeared in the peer-reviewed journal First Monday to show just how interconnected our world really is. To create the maps, researchers analyzed the 46.7 million tweets posted between October 23 and November 30, 2012, looking specifically at those with a tagged geographic location. 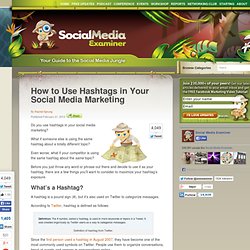 What if someone else is using the same hashtag about a totally different topic? Even worse, what if your competitor is using the same hashtag about the same topic? How to Run a Twitter Campaign the Right Way (#JayZSyncShow) You've probably heard about SXSW, currently in full swing in Austin, TX. But did you hear about Jay-Z's South by Southwest Amex Sync Show? It was an interactive, 90-minute event hosted Monday night that was broadcast live in Austin, live on YouTube, on the Vevo mobile and tablet platform, and now on-demand until March 19th on Xbox Live and the American Express Twitter account and YouTube channel.

The event was free to attend in Austin for American Express cardholders, and fans who couldn't attend in person and wanted to interact were invited to tweet song requests to Jay-Z using the hashtag #JayZSyncShow. So what was all this hoopla for? And who cares? About the #JayZSyncShow Campaign. Your Simple Guide to Launching a Twitter Advertising Campaign. Teachers unlock tweet smell of success. Primary school principal Henry Grossek. Photo: Luis Enrique Ascui WHILE our leaders nut out what innovations are needed to elevate Australia's schools into the top five on the international league table by 2025, something more collaborative is already happening - on Twitter. Educators in Australia and around the world are finding each other on the microblogging network to converse, exchange ideas and conduct research.

Some argue this grassroots conversation will contribute significantly to improving what goes on in our classrooms. Others question how this is possible in 140 characters. A common misconception is that Twitter aggregates only banal snippets - what my pet dog just ate, for example - while the utility of the site as a professional tool is overlooked. At first glance, the Australian community of education tweeters may seem a motley bunch, yet the blend of public, private, rural, urban, young and old plait themselves into a seamless conversation about education. Advertisement.