3D printing. An ORDbot Quantum 3D printer. 3D printing or additive manufacturing[1] is a process of making a three-dimensional solid object of virtually any shape from a digital model. 3D printing is achieved using an additive process, where successive layers of material are laid down in different shapes.[2] 3D printing is also considered distinct from traditional machining techniques, which mostly rely on the removal of material by methods such as cutting or drilling (subtractive processes). 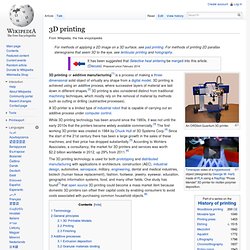 Key Control Helps Find Missing Objects Around the House. As soon as GPS and other micro-location devices hit it big, a lot of ideas were generated around the notion of tagging lost items that frequently need to be re-found – keys, wallets and the like. 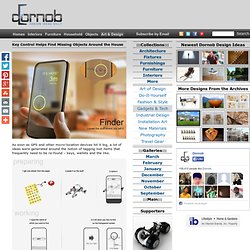 Few devices propose such a simple and user-friendly solution as this one, though, by Chu Wang, Qiujin Kou, Qian Yin & Yonghua Zhang – the RFID tracking sticker is nothing special, but the gadget that goes with it is just great. The main terminal helps direct you in three-dimensional space tower the missing object, guiding with arrows then highlighting with circles while showing the distance to your destination, all in the compact shape of a smartphone (perhaps some day it will become one with your cellular device, too!). Aerogel: See-Through, Strong as Steel & Ligher than Air. Despite its incredibly low density, aerogel is one of the most powerful materials on the planet. 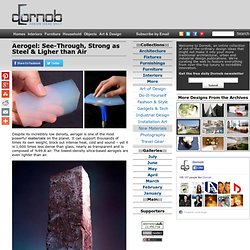 It can support thousands of times its own weight, block out intense heat, cold and sound – yet it is 1,000 times less dense than glass, nearly as transparent and is composed of %99.8 air. The lowest-density silica-based aerogels are even lighter than air. Despite its fragility in certain regards and its incredible lack of density, aerogel has amazing thermal, acoustical and electrical insulation properties as illustrated by the images here. A single one-pound block can also support half a ton of weight. NASA continues to find new space-based applications for this incredible material. An aerogel window one inch thick has the effective insulative capacity of a ten-inch thick glass window system. Aside from its other capabilities, aerogel also has amazing absorbing abilities. New Noise-Quenching Curtains Absorb Sound, Let in Light.

Somewhere between thick and opaque noise-blocking curtains and clear sound-reflecting glass windows there was a missing link, and this textile is it: lightweight and translucent, it sucks in sound without obscuring your view. 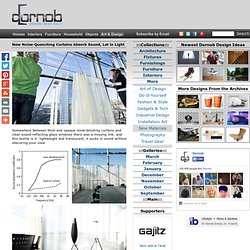 Specializing in Materials Science & Technology, the EMPA worked with textiles experts, acoustical engineers and computer modelers to weave disparate disciplines into a new compelling set of acoustically-altered patterns. Passive noise cancellation is of course a particularly tricky task in malleable and thin materials due to issues of density and directionality.

Mathematical projects and digital models led to real manufacturing and testing, resulting in something five times more soundproof than traditional hanging curtains (and significantly better than bare concrete or glazed surfaces) but still sufficiently fireproof and translucent to let in strands of daylight. See Through (the) Future: 10 Cutting-Edge Glass Concepts. Transparency is only the beginning – this incredible video from Corning walks you through a day in the life of your not-too-distant future self, using glass in ways that would have sounded like pure science-fiction fantasy a few years back.? 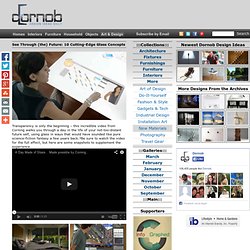 Be sure to watch the video for the full effect, but here are some snapshots to supplement the experience. It starts with waking up in the morning, to adjustable photovoltaic windows, an edgeless flat-screen television and a touch-screen set of interactive bathroom mirror monitors. Next up: the kitchen, where you can cook while you watch the news on the very same surface, and your kids can zoom, scale, slide and sketch accents onto pictures digitally tacked up on the refrigerator door. Then off to work in your car – with a glass touch-screen control system – and perhaps a quick chat on your handheld glass phone.

Folding Concrete?! Flat-Pack Building Blocks of the Future. This may be the biggest invention since that long-standing, still-universal staple of the construction industry: the red clay brick. 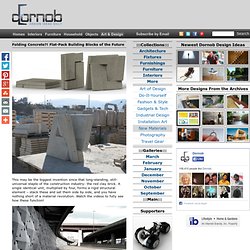 A single identical unit, multiplied by four, forms a rigid structural element – stack these and set them side by side, and you have nothing short of a material revolution. Watch the videos to fully see how these function! Created by Dror Benshetrit after years of toying with related geometries and building methods, this super-simple, gravity-driven block system has as many applications as one can imagine. It could be used for short-term emergency shelters, on the one hand, or to hold up bridges for the long haul on the other.

Think: Buckminster Fuller domes for the 21st Century. So how high can they go? See-Through, Light-Transmitting … Concrete?! Concrete has a sometimes-bad reputation as a harsh, rigid, cold-to-the-touch and straight-edged material. 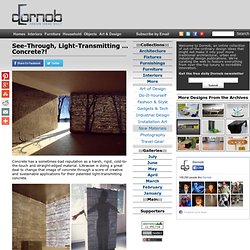 Litracon is doing a great deal to change that image of concrete through a score of creative and sustainable applications for their patented light-transmitting concrete. Filled with optical fibers that run from one end of a poured piece of concrete to the other, these prefabricated blocks and panels effectively transmit light from one side to the other. Colors and light remain remarkably consistent from end to end, but with a natural variation from the pouring process that actually softens the effects considerably. The fibers can transmit light to over 50 feet and, as they occupy only a small percentage of the total concrete block or panel, they do not significantly effect the structural capabilities of the poured pieces.

Dazzling Design: 3D Digital-Print Patterns on Clear Glass Tile. They might be a bit bright for your bathroom, or distract from cooking as a kitchen backsplash, but there is something downright dazzling about these colorful, computer-printed tiles regardless of what room you do (or do not) want to install them in. 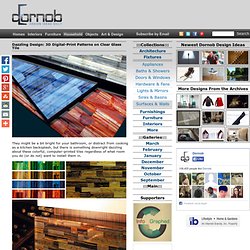 Levitiles has divided their elegant-end designs into three basic types, with both warm- and cool-color variants in each. There is a smooth-surface style that looks layered as a result of the complex print placed on the surface but without the standard frosted effect. Liquid Wood Chairs: Classic Material Flows in New Furniture. For all its flawed variability, wood has long remained a leading go-to choice for creating furniture. 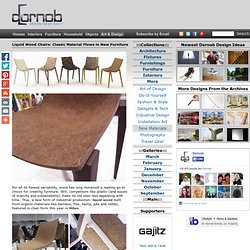