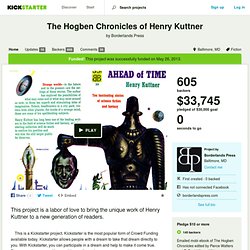 Kickstarter is the most popular form of Crowd Funding available today. Kickstarter allows people with a dream to take that dream directly to you. With Kickstarter, you can participate in a dream and help to make it come true. Plus, you come away with something really cool. Some years ago, we had a very special dream. Kickstarter allows everyone to contribute at their own comfort level. The Alluring Art of Margaret Brundage: Queen of Pulp Pin-up Art (9781934331491): Stephen D. Korshak, J. David Sopurlock. Science Fiction and Fantasy Creators Who Became Their Own Genres. Lovecraft, without a doubt the greatest omission and worthier than most of those on the list E. 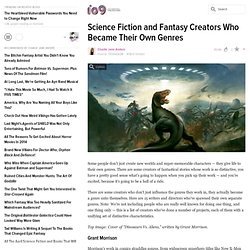 E. Smith Tolkien in his non-professional work. Why We Need Big, Bold Science Fiction. The future isn't what it used to be. 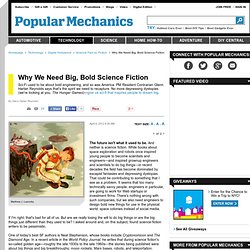 And neither is science fiction. While books about space exploration and robots once inspired young people to become scientists and engineers—and inspired grownup engineers and scientists to do big things—in recent decades the field has become dominated by escapist fantasies and depressing dystopias. Amongst The New Pulpeteers (Or, “What The Good Goddamn Is ‘New Pulp,’ Anyway?”) New Pulp Fiction for Our New Hard Times. Pulp fiction is back — in print, online, in ebooks, and on iPads. 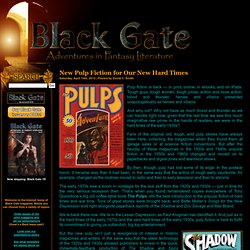 Tough guys, tough women, tough prose, action and more action, blood and thunder, heroes and villains presented unapologetically as heroes and villains. And why not? Why not have as much blood and thunder as we can handle right now, given that the last time we saw this much imaginative raw prose in the hands of readers, we were in the hard times of the early 1930s? Fans of the original old, tough, wild pulp stories have always been here, collecting the magazines when they found them at garage sales or at science fiction conventions.

But after the heyday of these magazines in the 1930s and 1940s, popular fiction in the 1950s and 1960s changed and moved on to paperbacks and digest zines and television shows. Lost Classics of Pulp: Guy Boothby’s Dr. Nikola and Pharos the Egyptian. Why Buck Rogers Should Be the Next Pulp SF Hero to Make a Comeback. Gil Gerard as Buck Rogers in 1979 Despite many moviegoers not having any clue who or what John Carter was all about, the movie did prove one thing: bygone pulp SF heroes never die, they just get remade, rebooted, re-imagined or subjected to a host of other transformative verbiage. 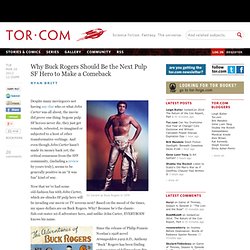 And even though John Carter hasn’t made its money back yet; the critical consensus from the SFF community, (including a review by yours truly), seems to be generally positive in an “it was fun” kind of way. How Not to Be a Clever Writer — io9.com. The Life and Mind of Edgar Rice Burroughs by Mark Linthicum. John Carter [of Mars] Is a Perfect Edgar Rice Burroughs Movie. John Carter (2012)Directed by Andrew Stanton. 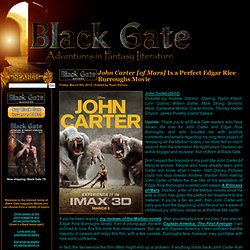 I’ve never felt so much support from the Internet in the eight years I’ve been an active blogger and reviewer, four of them at Black Gate. Don’t expect the brackets in my post title John Carter [of Mars] to endure. People who have already seen John Carter will know what I mean: Walt Disney Pictures could not stop director Andrew Stanton from making John Carter of Mars the true title of his adaptation of Edgar Rice Burroughs’s century-old classic A Princess of Mars.

In fact, the fan-service the film offers might end up a problem. Yellowed Perils: Yet another ‘John Carter’ post. Okay, I’ve been on a string of John Carter posts of late because of the movie’s release. 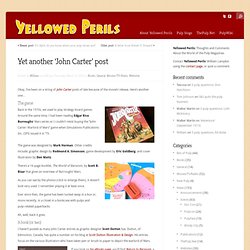 Here’s another one… The game Back in the 1970s, we used to play strategy board games. INTO THE DARK by James Lowder. John Carter 2012, 132 Minutes Disney Director: Andrew Stanton Cast: Taylor Kitsch, Lynn Collins, Mark Strong, Dominic West, Willem Dafoe *** ½ (of 5) Before he secured his place in the annals of international pop culture with the Tarzan stories, Edgar Rice Burroughs offered up the initial adventure in the far more interesting and inventive Barsoom series. 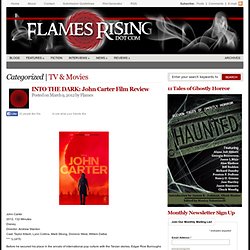 “Under the Moons of Mars,” later to be retitled A Princess of Mars for book publication, first saw print in the Munsey pulp The All-Story, from February through July of 1912. The six-part serial chronicles the adventures of Confederate veteran Captain John Carter, who stumbles across a cave in Arizona through which he is transported via psychic projection to Mars, or as the locals call it, Barsoom. The script for the new Disney film does a fairly good job of capturing the spirit of the original novel. As the title character, Friday Night Lights alum Taylor Kitsch fares a lot better.

Review by James Lowder Tags | Reviews, sci-fi. MusingSES. Building An Elder God by Jamie Chambers. That old book you found in that locked safe in the hidden room underneath the Arkham library had some pretty interesting tidbits — including a formula to grow a terrifying tentacled beast. 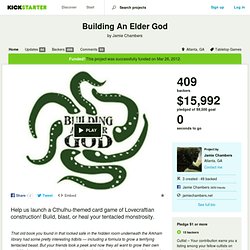 But your friends took a peek and now they all want to grow their own god. You’ve got your trusty twelve-gauge handy to blast a tentacle here and there and make sure your creature grows to completion first. And they call you mad … Signal Fire Studios is a new small-press game publishing company that combines proven experience, exciting new talent, and 21st century ideas. The Internet and social media are a big part of our marketing and social outreach, and we’ve come to realize Kickstarter is a fantastic tool to allow our friends, fans, and those who discover and like our ideas to help us produce exciting products and build our business. Building An Elder God is a casual card game of Lovecraftian construction for 2-5 players ages 8 and up. Good news … The game is DONE! Update! 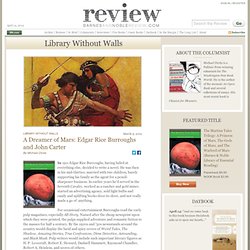 He was then in his mid-thirties, married with two children, barely supporting his family as the agent for a pencil-sharpener business. In earlier years he'd served in the Seventh Cavalry, worked as a rancher and gold miner, started an advertising agency, sold light bulbs and candy and uplifting books door-to-door, and not really made a go of anything. For occasional entertainment Burroughs read the early pulp magazines, especially All-Story. Named after the cheap newsprint upon which they were printed, the pulps supplied adventure and romantic fiction to the masses for half a century. Amazon. Laurie's Wild West. Win Scott Eckert.com. Not by the Direct Method. Not by the Direct Method.: This is why you should read history.

“The Language of Stamps:” A Cautionary Tale for Steampunk Writers. ALL PULP. NewPulp. THE PULP FACTORY. Pulp Fiction Reviews. MusingSES. The Adventures of Captain Hatteras: Verne Lays the Foundation for Fictional Pulp Adventures to Foreign Lands. By Duane Spurlock Awhile back, I posted about Jules Verne as the pre-pulp pioneer for pulp fiction. Let's look at this idea a bit more closely. , translated by William Butcher (Oxford: Oxford University Press, 2005). , who translated this volume and provided its introduction and notes, is on a quest to restore Verne’s reputation in the United States as worthy of inclusion in the literary canon — not as a writer for children, but as a serious author for adults, deserving university recognition and academic study.

But Butcher and others — among them Walter James Miller , Edward Baxter, Frederick Paul Walter—have been translating some of Verne’s most famous works anew and bringing into English several works that hadn’t been translated before, all of which helps to repair the Frenchman’s literary reputation in Britain and the U.S. . , he’s also sometimes called the . Verne was very concerned with basing his extrapolations on existing knowledge. Books From The Crypt.