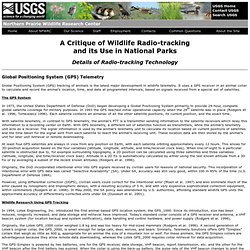 It uses a GPS receiver in an animal collar to calculate and record the animal's location, time, and date at programmed intervals, based on signals received from a special set of satellites. The GPS System In 1973, the United States Department of Defense (DoD) began developing a Global Positioning System primarily to provide 24-hour, complete global satellite coverage for military purposes. With satellite telemetry, in contrast to GPS telemetry, the animal's PTT is a transmitter sending information to the satellite receivers which relay this information to a recording center on Earth. At least four GPS satellites are always in view from any position on Earth, with each satellite orbiting approximately every 12 hours. Track Wildlife - Followit - Tellus GPS collars on Wolf in Alaska. Using Tellus GPS collars to investigate the ecological effects of snowmobile activity on wildlife The ecological effects of snowmobile activity on wildlife are increasingly a concern for resource managers and planners, yet little is understood about the implications for predators, particularly wolves (Canis lupus), and the dynamic role that OSV (over-snow vehicle) trails can have on predator-prey interactions. 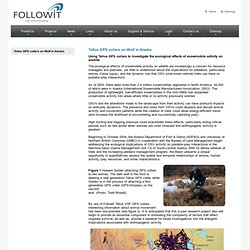 As of 2003, there were more than 2.4 million snowmobiles registered in North America, 34,000 of which were in Alaska (International Snowmobile Manufacturers Association, 2003). The production of lightweight, fuel-efficient snowmobiles in the mid-1990s has expanded snowmobile activity into areas where little or no activity previously existed. OSVs and the alterations made to the landscape from their activity can have profound impacts on wolf-prey dynamics. Figure 1 Howard Golden attaching GPS collars to two wolves. Track Wildlife - Tellus collars. Followit’s GPS-collars are designed to optimize both animal welfare and research possibilities. 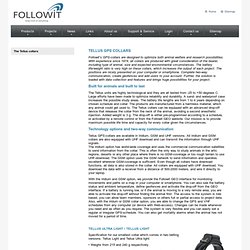 With experience since 1974, all collars are produced with great consideration of the bearer, including type of animal, size and expected environmental circumstances. The battery life/weight ratio is very high on these collars, which increases the output of each project. The positions are nicely presented on your computer or smartphone. Complete two-way communication, create geofences and add users to your account. Further, the solution is loaded with data collection and features and brings huge possibilities for your project.

The Tellus units are highly technological and they are all tested from -25 to +50 degrees C. Tellus GPS-collars are available in Iridium, GSM and UHF versions. With the Iridium and GSM option, we provide the Followit GEO interface for monitoring movements and paths on a map in your computer or smartphone. . • Weighs from 215 and 240 g respectively. National Geographic. National Geographic's Crittercam is a research tool designed to be worn by wild animals. 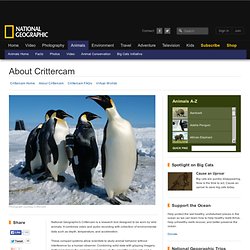 It combines video and audio recording with collection of environmental data such as depth, temperature, and acceleration. These compact systems allow scientists to study animal behavior without interference by a human observer. Combining solid data with gripping imagery, Crittercam brings the animal's point of view to the scientific community and a conservation message to worldwide audiences. For more than a decade Crittercam has given us insight into the lives of whales, sharks, seals and sea lions, sea turtles, penguins, manatees, and other marine animals. In 2002 the first prototype of a terrestrial Crittercam (designed for land animals) survived its maiden voyage on a wild African lion, opening the door to a whole new world of animal-borne imaging research.

Origin of CrittercamCrittercam was conceived in 1986 by marine biologist and filmmaker Greg Marshall. With Frank Parrish of the U.S. Meet the People Behind National Geographic's Animal Cameras. Sensors. IMG 4139sm. The Wolf OR-7 Expedition Began with a Collar. Our expedition, and all that we know about Wolf OR-7, stems from the GPS collar that Wolf OR-7 was fitted with one cold day in February of 2011. 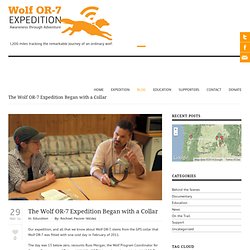 The day was 13 below zero, recounts Russ Morgan, the Wolf Program Coordinator for Oregon Department of Fish and Wildlife (ODFW) in an interview with the Wolf OR-7 Expedition team. The Imnaha wolf pack was located in the Wallowa Mountains, and from a helicopter Russ Morgan took aim with a specialized dart at the first wolf he could single out from the pack. That wolf happened to be Wolf OR-7. The level of responsibility Russ Morgan now had with a drugged and sleepy wolf on his hands, prompted a quick helicopter landing and Russ took off to find the wolf as quickly as possible through deep snow and a steep canyon. Collars are Key to Wolf Studies - Yellowstone Park Foundation. Collars are Key to Wolf Studies Wolves range far and wide throughout Yellowstone’s 2.2-million acres of dense wilderness, yet the Park’s wolf population is one of the most studied populations of wild wolves ever. 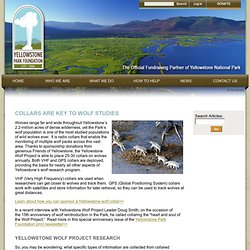 It is radio collars that enable the monitoring of multiple wolf packs across this vast area. Thanks to sponsorship donations from generous Friends of Yellowstone, the Yellowstone Wolf Project is able to place 25-30 collars on wolves annually. Both VHF and GPS collars are deployed, providing the basis for nearly all other aspects of Yellowstone’s wolf research program. VHF (Very High Frequency) collars are used when researchers can get closer to wolves and track them. Wildlife Tracking. WaterQuality. Tracking Wildlife - North Star Science and Technology, LLC. OR-7 And Friends: Wolf Management Goals.