Most Germans don’t buy their homes, they rent. Here’s why. Where do you see yourself in five years? 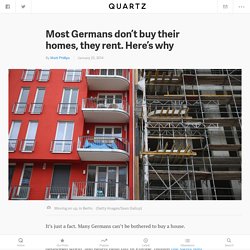 Tell me about a time when you showed leadership. What is your biggest weakness? These are the standard questions that job candidates face during interviews. And by now, everyone also has standard answers. (“My biggest weakness? As you scale to the upper rungs of the corporate ladder, you are unlikely to field such hackneyed queries. A first-rate résumé won’t help you now. “Would you rather be respected or feared?” Michael Gregoire, CEO of CA Technologies, an IT management software company, admits that his favorite interview question is a bit Machiavellian. In theory, there is no right answer, but in practice the role they’re interviewing for determines which way the CEO leans. “Why are you here today?” Is 'Progress' Good for Humanity? The stock narrative of the Industrial Revolution is one of moral and economic progress. 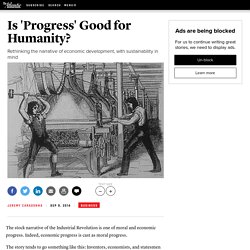 Indeed, economic progress is cast as moral progress. The story tends to go something like this: Inventors, economists, and statesmen in Western Europe dreamed up a new industrialized world. Fueled by the optimism and scientific know-how of the Enlightenment, a series of heroic men—James Watt, Adam Smith, William Huskisson, and so on—fought back against the stultifying effects of regulated economies, irrational laws and customs, and a traditional guild structure that quashed innovation. By the mid-19th century, they had managed to implement a laissez-faire (“free”) economy that ran on new machines and was centered around modern factories and an urban working class. It was a long and difficult process, but this revolution eventually brought Europeans to a new plateau of civilization. Europe had rescued itself from the pre-industrial misery that had hampered humankind since the dawn of time.

Inequality, Unbelievably, Gets Worse - NYTimes.com. THE Democrats’ drubbing in the midterm elections was unfortunate on many levels, but particularly because the prospect of addressing income inequality grows dimmer, even as the problem worsens. 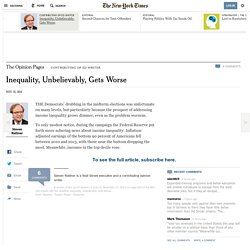 To only modest notice, during the campaign the Federal Reserve put forth more sobering news about income inequality: Inflation-adjusted earnings of the bottom 90 percent of Americans fell between 2010 and 2013, with those near the bottom dropping the most. Meanwhile, incomes in the top decile rose. Continue reading the main story Top 10 percent Next 10 percent 60th–80th percentiles 40th–60th percentiles 20th–40th percentiles Bottom 20 percent. A Good Way to Wreck a Local Economy: Build Casinos. No one should look to the gambling industry to revive cities, “because that’s not what casinos do.” 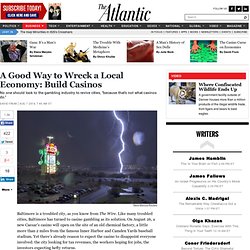 Steve Marcus/Reuters Baltimore is a troubled city, as you know from The Wire. Like many troubled cities, Baltimore has turned to casino gambling as its solution. Dirk Mateer. The Economics of Jane Austen. In her fiction, the 18th-century novelist wrestled with the same question that preoccupied Adam Smith: Does the pursuit of wealth diminish a person's moral integrity? 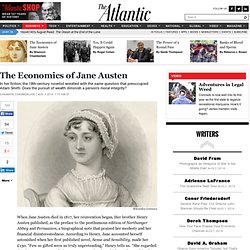 Wikimedia Commons When Jane Austen died in 1817, her reinvention began. Her brother Henry Austen published, as the preface to the posthumous edition of Northanger Abbey and Persuasion, a biographical note that praised her modesty and her financial disinterestedness. According to Henry, Jane accounted herself astonished when her first published novel, Sense and Sensibility, made her £150. “Few so gifted were so truly unpretending,” Henry tells us. Country Analysis. Please select a country in the dropdown menu above to see the values for the 6 dimensions. 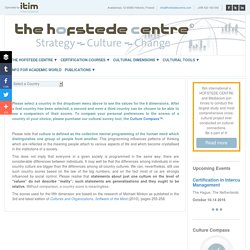 After a first country has been selected, a second and even a third country can be chosen to be able to see a comparison of their scores. To compare your personal preferences to the scores of a country of your choice, please purchase our cultural survey tool, the Culture Compass™. Please note that culture is defined as the collective mental programming of the human mind which distinguishes one group of people from another. This programming influences patterns of thinking which are reflected in the meaning people attach to various aspects of life and which become crystallised in the institutions of a society. Treasury's bank bailout list - CNNMoney.com. Texas Council on Economic Education — Helping young people learn to think & make better economic & financial choices in a global economy. Podcasts. The Federal Reserve and You Video and DVD Order Form - Philadelphia Fed. Class Inequality and Political Economics. Jackson Hole Paper Warns Of Falling Labor Market Dynamism.

Economists: Your Parents Are More Important Than Ever. The lesson of today's monumental social mobility study is simple. 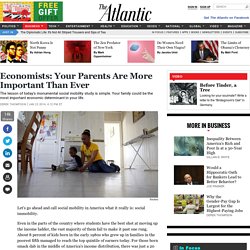 Your family could be the most important economic determinant in your life. Let's go ahead and call social mobility in America what it really is: social immobility. Even in the parts of the country where students have the best shot at moving up the income ladder, the vast majority of them fail to make it past one rung. About 8 percent of kids born in the early 1980s who grew up in families in the poorest fifth managed to reach the top quintile of earners today. For those born smack dab in the middle of America's income distribution, there was just a 20 percent chance of making it to the top.