Scientists Have Created Crystals That Are Almost Alive. New shape-shifting metals discovered. 4 October 2013Last updated at 08:00 ET By Simon Redfern Science writer Crystals seen on the fine scale: River-like patterns form and change as the metal morphs A new shape-changing metal crystal is reported in the journal Nature, by scientists at University of Minnesota. 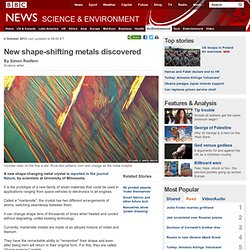 It is the prototype of a new family of smart materials that could be used in applications ranging from space vehicles to electronics to jet engines. Called a "martensite", the crystal has two different arrangements of atoms, switching seamlessly between them. It can change shape tens of thousands of times when heated and cooled without degrading, unlike existing technology. Currently, martensite metals are made of an alloyed mixture of nickel and titanium. They have the remarkable ability to "remember" their shape and even after being bent will return to their original form.

Research by CU-Boulder physicists creates ‘recipe book’ for building new materials. By showing that tiny particles injected into a liquid crystal medium adhere to existing mathematical theorems, physicists at the University of Colorado Boulder have opened the door for the creation of a host of new materials with properties that do not exist in nature. 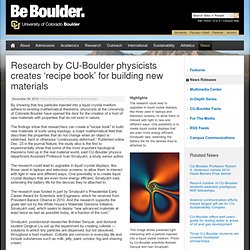 The findings show that researchers can create a "recipe book" to build new materials of sorts using topology, a major mathematical field that describes the properties that do not change when an object is stretched, bent or otherwise “continuously deformed.” Published online Dec. 23 in the journal Nature, the study also is the first to experimentally show that some of the most important topological theorems hold up in the real material world, said CU-Boulder physics department Assistant Professor Ivan Smalyukh, a study senior author. The research could lead to upgrades in liquid crystal displays, like those used in laptops and television screens, to allow them to interact with light in new and different ways. Contact: This Self-healing Concrete Repairs Itself with Bacteria.

Material Expands When You Compress It, Shrinks When You Stretch It. Metamaterials research has generally focused on media with strange or unique electromagnetic properties, like the ability to bend light or sound in an unnatural way, but materials scientists at Northwestern University are experimenting with an entirely new kind of material with unique mechanical properties. 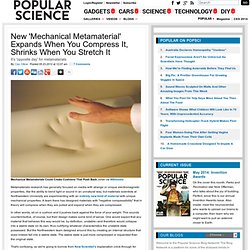 A team there has designed materials with "negative compressibility" that in theory will compress when they are pulled and expand when they are compressed. In other words, sit on a cushion and it pushes back against the force of your weight. This sounds counterintuitive, of course, but their design makes some kind of sense. One would expect that any material that behaves this way would be, by definition, unstable--and therefore would collapse into a stable state on its own, thus nullifying whatever characteristics the unstable state possessed.

Walking Bio-Bot Made WIth Cells, Gels. Humans build autonomous robots all the time, but they tend to be made of metal, plastic and need batteries. 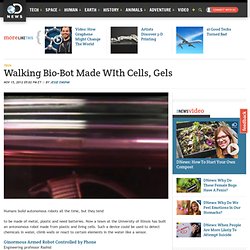 Now a team at the University of Illinois has built an antonomous robot made from plastic and living cells. Such a device could be used to detect chemicals in water, climb walls or react to certain elements in the water like a sensor. Engineering professor Rashid. Scientists infuse 'life' into inanimate compounds. Scientists have infused "life" into inanimate chemical compounds by flashing a blue-violet light that prompted them to assemble themselves into a crystal. 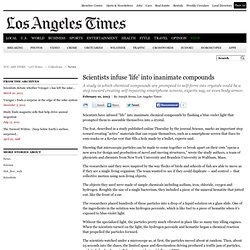 The feat, described in a study published online Thursday by the journal Science, marks an important step toward creating "active" materials that can repair themselves, such as a smartphone screen that fixes its own cracks or a Kevlar vest that fills a hole made by a bullet, experts said. Showing that microscopic particles can be made to come together or break apart on their own "opens a new area for design and production of novel and moving structures," wrote the study authors, a team of physicists and chemists from New York University and Brandeis University in Waltham, Mass.

The researchers said they were inspired by the way flocks of birds and schools of fish are able to move as if they are a single living organism. The team wanted to see if they could duplicate — and control — that collective motion using non-living objects. Polymer can turn swimming pool to jelly. A. 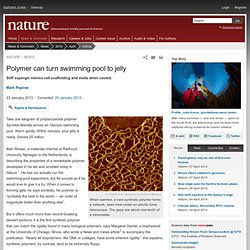 Rowan et al / Radboud University of Nijmegen When warmed, a new synthetic polymer forms a network, seen here under an atomic force microscope. The gaps are about one-tenth of a micrometer. Take one kilogram of polyisocyanide polymer. Sprinkle liberally across an Olympic swimming pool. Alan Rowan, a materials chemist at Radboud University Nijmegen in the Netherlands, is describing the properties of a remarkable polymer developed in his lab and unveiled today in Nature1. But it offers much more than record-breaking dessert portions: it is the first synthetic polymer that can match the rigidity found in many biological polymers, says Margaret Gardel, a biophysicist at the University of Chicago, Illinois, who wrote a News and Views article2 to accompany the publication.

Rowan’s polymer strands have a helical backbone with thousands of short peptides jutting out from the sides, each carrying long tails made of repeating carbon and oxygen chains. Ref. 1.