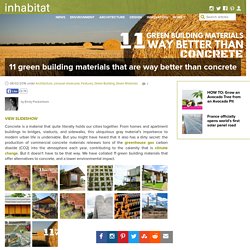 From homes and apartment buildings to bridges, viaducts, and sidewalks, this ubiquitous gray material's importance to modern urban life is undeniable. But you might have heard that it also has a dirty secret: the production of commercial concrete materials releases tons of the greenhouse gas carbon dioxide (CO2) into the atmosphere each year, contributing to the calamity that is climate change. But it doesn't have to be that way. We have collated 11 green building materials that offer alternatives to concrete, and a lower environmental impact. 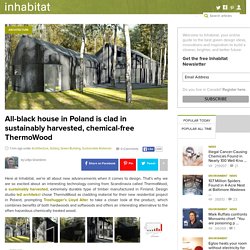 That's why we are so excited about an interesting technology coming from Scandinavia called ThermoWood, a sustainably harvested, extremely durable type of timber manufactured in Finland. Design studio też architekci chose ThermoWood as cladding material for their new residential project in Poland, prompting Treehugger's Lloyd Alter to take a closer look at the product, which combines benefits of both hardwoods and softwoods and offers an interesting alternative to the often hazardous chemically treated wood. We’ve seen some great new developments in the field of sustainable cladding materials, like low maintenance softwood by Norwegian manufacturer Kebony and clever reclaimed Wabi Sabi.

That’s great, because pressure treated wood often features hazardous chemicals that increase its durability but can be toxic when loose wood dust particles or fine toxic residues are generated. Related: How sustainable is wood? Making Wood Last With Fire, Not Paint: A Japanese Technique. Shou Sugi Ban 焼杉板 (or Yakisugi) is an ancient Japanese exterior siding technique that preserves wood by charring it with fire. 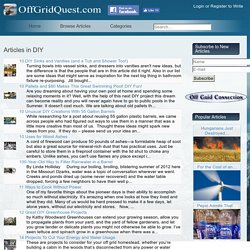 Traditionally, Sugi wood (cryptomeria japonica L.f., also called Japanese cedar) was used. The process involves charring the wood, cooling it, cleaning it, and finishing it with a natural oil. HomeBioGas - TURN WASTE INTO VALUE - Preorder. Israeli Company Turns Trash Into Biogas. The Western world may have grown accustomed to microwave ovens and electric burners, but the majority of developing populations still cook their food and heat their homes over an open fire. 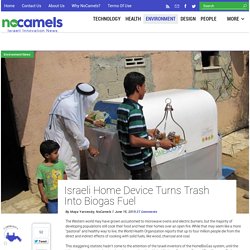 While that may seem like a more “pastoral” and healthy way to live, the World Health Organization reports that up to four million people die from the direct and indirect effects of cooking with solid fuels, like wood, charcoal and coal. This staggering statistic hadn’t come to the attention of the Israeli inventors of the HomeBioGas system, until the information was pointed out to them by none other than United Nations Secretary General Ban Ki-moon. During a visit with Israeli President Reuben Rivlin last year, Ban expressed the global need for a sustainable and safe solution to this dire issue, naming Israel’s HomeBioGas’s bio-digester as a very viable answer. The HomeBioGas team meets with UN Secretary General Ban Ki-moon.

The Arava Institute Biogas Project v1. Over 670 Feet Of Rammed Earth Wall Made From Local Clay Encloses These Subterranean Quarters. The longest rammed earth wall in Australia and – probably – the southern hemisphere, has been selected as a finalist in the (Australian Institute of Architects) Western Australia architecture awards. 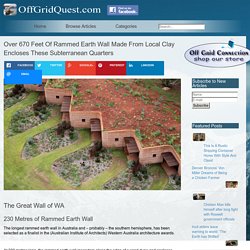 The Great Wall of WA - Luigi Rosselli Architects. The longest rammed earth wall in Australia and – probably – the southern hemisphere, has been selected as a finalist in the (Australian Institute of Architects) Western Australia architecture awards. 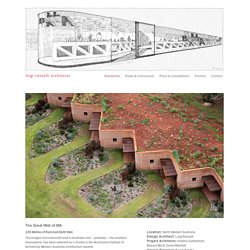 At 230 metres long, the rammed earth wall meanders along the edge of a sand dune and encloses twelve earth covered residences, created to provide short-term accommodation for a cattle station during mustering season. With their 450mm thick rammed earth facade and the sand dune to their rear and forming their roofs, the residences have the best thermal mass available, making them naturally cool in the subtropical climate. The Problem With Reinforced Concrete.

By itself, concrete is a very durable construction material. 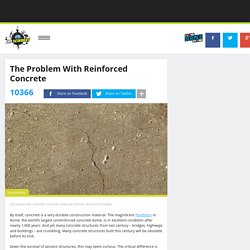 The magnificent Pantheon in Rome, the world’s largest unreinforced concrete dome, is in excellent condition after nearly 1,900 years. And yet many concrete structures from last century – bridges, highways and buildings – are crumbling. Many concrete structures built this century will be obsolete before its end. Given the survival of ancient structures, this may seem curious. The critical difference is the modern use of steel reinforcement, known as rebar, concealed within the concrete. While repair may be justified to preserve the architectural legacy of iconic 20th-century buildings, such as those designed by reinforced concrete users like Frank Lloyd Wright, it is questionable whether this will be affordable or desirable for the vast majority of structures.