World's smallest nanomotor could power cell-sized nanobots for drug delivery. Scientists at the Cockrell School of Engineering at the University of Texas have built and tested what appears to be the world's smallest, fastest, and longest-running nanomotor yet – so small that it could fit inside a single cell. 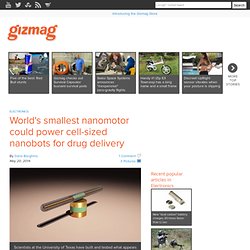 The advance could be used to power nanobots that would deliver specific drugs to individual living cells inside the human body. In the distant future, when faced with a cancer diagnosis, we might be able to simply ingest a "magic pill" filled with hordes of miniscule nanobots that target individual cancerous cells with drugs and leave the healthy ones unharmed. New material for flat semiconductors. Researchers around the world have been working to harness the unusual properties of graphene, a two-dimensional sheet of carbon atoms.

But graphene lacks one important characteristic that would make it even more useful: a property called a bandgap, which is essential for making devices such as computer chips and solar cells. Now, researchers at MIT and Harvard University have found a two-dimensional material whose properties are very similar to graphene, but with some distinct advantages — including the fact that this material naturally has a usable bandgap. The research, just published online in the Journal of the American Chemical Society, was carried out by MIT assistant professor of chemistry Mircea Dincă and seven co-authors. A glow of recognition. Researchers at MIT have developed a new way of revealing the presence of specific chemicals — whether toxins, disease markers, pathogens or explosives. 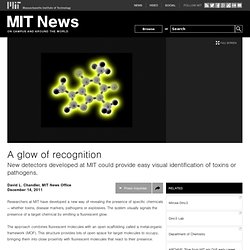 The system visually signals the presence of a target chemical by emitting a fluorescent glow. The approach combines fluorescent molecules with an open scaffolding called a metal-organic framework (MOF). This structure provides lots of open space for target molecules to occupy, bringing them into close proximity with fluorescent molecules that react to their presence. The findings were reported in the Journal of the American Chemical Society in a paper by assistant professor of chemistry Mircea Dincă, with postdoc Natalia Shustova and undergraduate student Brian McCarthy, published online in November and to appear in a forthcoming print issue. Synthetic biology gets reborn as an aesthetic dream - 28 April 2014. Book information Synthetic Aesthetics: Investigating synthetic biology's designs on nature by Alexandra Daisy Ginsberg, Jane Calvert, Pablo Schyfter, Alistair Elfick and Drew Endy Published by: The MIT Press Price: $34.95/£24.95 Grand designs: xylem cells could help us make stronger buildings (Image: Dr David Furness, Keele University/SPL/Getty Images) In Synthetic Aesthetics, researchers and designers team up to present an exciting way of learning from nature SYNTHETIC biology is not like other sciences. 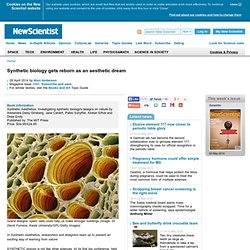 If synthetic biologists think like scientists, they may miss their eureka moment. Synthetic biology is an emerging discipline, but paradoxically it is not particularly new. 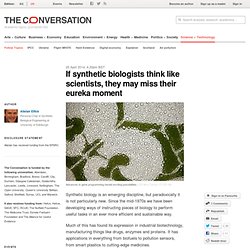 Since the mid-1970s we have been developing ways of instructing pieces of biology to perform useful tasks in an ever more efficient and sustainable way. Much of this has found its expression in industrial biotechnology, manufacturing things like drugs, enzymes and proteins. It has applications in everything from biofuels to pollution sensors, from smart plastics to cutting-edge medicines. You could conceive of synthetic biology as writing little DNA programs that instruct cell behaviour, like a little genetic app.

We're Only Just Starting To Understand The Miracle Of Hagfish Slime. Get excited – spider silk finally looks ready for commercialization. UC Riverside Researcher Uses Snail Teeth as Inspiration for More Efficient Solar Cells. A recent study conducted at the University of California has shown how teeth-growing techniques of marine snails can be applied to the solar industry, helping to create improved solar cells and lithium-ion batteries. 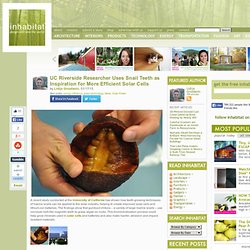 The findings show that gumboot chitons – a variety of large marine snails – use conveyer belt-like magnetic teeth to grasp algae on rocks. This biomineralization process could help grow minerals used in solar cells and batteries and also make harder, abrasion and impact-resistant materials. David Kisailus, assistant professor of chemical and environmental engineering at the University of California, Riverside started studying chitons five years ago, with particular focus on its specific teeth-forming process. 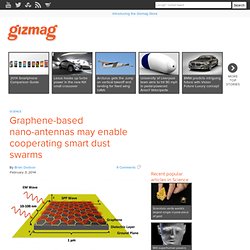 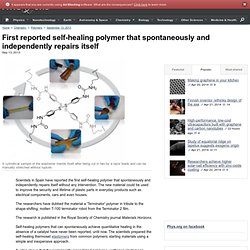 The new material could be used to improve the security and lifetime of plastic parts in everyday products such as electrical components, cars and even houses. The researchers have dubbed the material a 'Terminator' polymer in tribute to the shape-shifting, molten T-100 terminator robot from the Terminator 2 film. The research is published in the Royal Society of Chemistry journal Materials Horizons. Self-healing polymers that can spontaneously achieve quantitative healing in the absence of a catalyst have never been reported, until now. The scientists prepared the self-healing thermoset elastomers from common polymeric starting materials using a simple and inexpensive approach. How Flake-Handling Trick Will Enable Graphene's Next Revolution.

In recent months, a new sense of excitement has spread through the graphene research community. 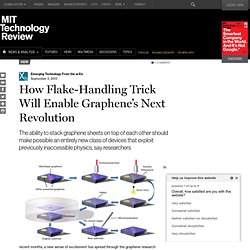 These guys are no longer focused on what they can do with single layers of carbon chickenwire. Instead they have a more ambitious plan. The new goal is to take single layers of high quality graphene and pile them on top of each other to create what physicists call van der Waals heterostructures, layer cakes of carbon crystals each just a single atom thick that promise to behave in entirely new ways. The hope is that this will open the way to undreamt of applications in superconductivity, semiconductor physics and so on. Scientists push and pull droplets with graphene. Scientists at the U.S. 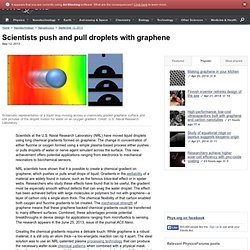 Naval Research Laboratory (NRL) have moved liquid droplets using long chemical gradients formed on graphene. The change in concentration of either fluorine or oxygen formed using a simple plasma-based process either pushes or pulls droplets of water or nerve agent simulant across the surface. This new achievement offers potential applications ranging from electronics to mechanical resonators to bio/chemical sensors. Secrets of the World's Most Remarkable Natural Materials - Wired Science. A spider web glistens in the fog. Photo: kennysarmy / Flickr At the end of his talk at the Falling Walls Conference in Berlin, Nicola Pugno unfurled a thin fabric and presented it to the audience.

New high-tech laser method allows DNA to be inserted 'gently' into living cells. (Phys.org) —The applications of gene therapy and genetic engineering are broad: everything from pet fish that glow red to increased crop yields worldwide to cures for many of the diseases that plague humankind. But realizing them always starts with solving the same basic scientific question—how to "transfect" a cell by inserting foreign DNA into it.

Experimental evaluation of cooling rates for fluidic layers as a function of flow rate, temperature. Heat transfer model to evaluate the experimental results, and design scaled up implementation. Optical absorption measurements, as a function of fluidic composition and color change. Incorporating fluidic flow is a means to develop adaptive solar and window technologies. Abstract Windows are a major source of energy inefficiency in buildings. Graphical abstract Keywords Convective cooling; Heat transfer; Microfluidic; Optical absorption; Window Copyright © 2013 Elsevier B.V. “Mini Lisa” demonstrates potential of nanomanufacturing technique. Arguably the world’s most famous painting, da Vinci's Mona Lisa has now been copied onto the world’s smallest canvas at the Georgia Institute of Technology. Associate Professor Jennifer Curtis' "Mini Lisa" is one-third the width of a human hair, with details as small as one-eighth of a micron.

Mini Lisa demonstrates the flexibility of a new nanolithography technique that can vary the surface concentration of molecules on very small portions of a substrate. View all Mini Lisa was rendered using an atomic force microscope and a new process called ThermoChemical NanoLithography (TCNL). The Georgia Tech team formed the image pixel by pixel. The molecular canvas is a plastic whose surface contains active chemical sites which are initially protected from chemical reaction by capping them with protecting molecules. Home: Spray-on Fabric Non-woven Coating Aerosol Technology Cotton Fibres. DNA Fog helps identify trespassers, thieves, and brigands. Imagine prowlers broke into your company warehouse over the weekend.

The alarm sounded, but the devious blaggards got away with the goods before the police arrived. DNA 'Fog' Marks Criminals Invisibly for Later ID. For years banks have rigged bags of money with exploding dye packs, which show the cash was stolen and mark the thief. Nanoscribe Will Sell a Micro 3-D Printer That Creates Tiny Structures in Seconds. Magpie Studio. Textile futures: the living shoe and the strawberry plant that grows lace. "We tend to work in the year 2050," says Carole Collet, who founded the Textile Futures course at Central Saint Martins 10 years ago. The power of cool: Whatever became of Starlite? - tech - 16 May 2012. THE egg is ready. Maurice Ward makes certain of that. Is 3D printing the key to Utopia? Magic trick: a 3D printer makes a plastic rabbit. Self-assembling plastic nanofibers present cheaper alternative to carbon nanotubes. French researchers have produced highly conducive plastic fibers with a thickness of only a few nanometers that self-assemble when exposed to a flash of light.

Solar nanocrystals float in printable ink. USC (US) — Scientists have developed a potential pathway to cheap, stable solar cells made from nanocrystals so small they can be painted onto clear surfaces as liquid ink. Chair Farm: Werner Aisslinger Creates Chairs from Living Trees! BIND-014, Nanomedicine Cancer Treatment, Shrinks Human Tumors. Cancer cell illustration courtesy of iStockphoto/Eraxion Chemotherapy treatment for cancer is a nasty process. Doctors must try to give patients just enough of the toxic drugs to kill off cancer cells without doing too much harm to the rest of the body’s healthy tissues, a balancing act that, even if successful, can nevertheless cause horrible side effects.

But what if you could program the harsh medicine to go only to the cancerous cells, sparing the rest of the body? Transparent, flexible “3-D” memory chips may be the next big thing in small memory devices, New memory chips that are transparent, flexible enough to be fo. Are viruses the way to green manufacturing? Piezolelectric graphene could have wide-reaching applications. International Biomolecular Design Competition. Playing pop music via paper posters with conductive ink. The Shape of Things to Come: NIST Probes the Promise of Nanomanufacturing Using DNA Origami. Who will get the biggest slice of 3D-printed pie? Berkeley Researchers Develop Cheap, Flexible Electronic Skin for Next-Gen Gadgets.