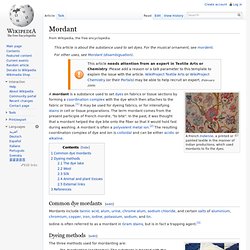 The faded look adored by designers and consumers is applied to denim after it has been cut, sewn, and transformed into jeans. The most popular treatment method is to wash the pants with bleach (hypochlorites) and pumice stones. “Bleach is used because it is unbelievably cheap and quick,” Bechtold says. But it also produces toxic absorbable organic halogens in the wastewater, he adds. So he and others are looking into alternatives such as peroxide-based reducing agents and enzymes. Bechtold recently tested a treatment process in which his team printed an alkali paste on denim and then washed the fabric with cellulases (Biotechnol. J., DOI: 10.1002/biot.201100002). – simo88

Originally extracted from flowering woad plants and tropical plants of the Indigofera genus, indigo is a water-insoluble pigment in its oxidized, blue form. To dye cotton, though, the compound must be reduced to its water-soluble, yellow form—called leucoindigo—that can latch onto textile fibers under basic conditions. So when originally white cotton yarn emerges from an indigo dye bath, it is yellow until oxygen in the air reacts to give the fibers their signature blue color, – simo88 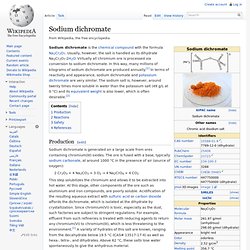 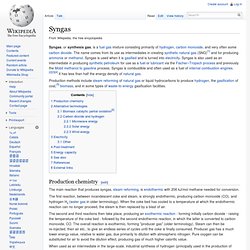 The name comes from its use as intermediates in creating synthetic natural gas (SNG)[1] and for producing ammonia or methanol. Syngas is used when it is gasified and is turned into electricity. Syngas is also used as an intermediate in producing synthetic petroleum for use as a fuel or lubricant via the Fischer–Tropsch process and previously the Mobil methanol to gasoline process. Syngas is combustible and often used as a fuel of internal combustion engines.[2][3][4] It has less than half the energy density of natural gas. Production methods include steam reforming of natural gas or liquid hydrocarbons to produce hydrogen, the gasification of coal,[5] biomass, and in some types of waste-to-energy gasification facilities. Production chemistry[edit] The hydrogen must be separated from the CO2 to be able to use it. 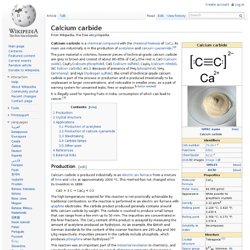 Calcium carbide is a chemical compound with the chemical formula of CaC2. Its main use industrially is in the production of acetylene and calcium cyanamide.[2] The pure material is colorless, however pieces of technical-grade calcium carbide are grey or brown and consist of about 80–85% of CaC2 (the rest is CaO (calcium oxide), Ca3P2 (calcium phosphide), CaS (calcium sulfide), Ca3N2 (calcium nitride), SiC (silicon carbide), etc.). Because of presence of PH3 (phosphine), NH3 (ammonia), and H2S (hydrogen sulfide), the smell of technical-grade calcium carbide is part of the process or production and is produced intentionally to be unpleasant in larger concentrations, and noticeable in smaller ones, as a part of warning system for unwanted leaks, fires or explosion. [citation needed]

Sodium carbonate. It most commonly occurs as a crystalline decahydrate, which readily effloresces to form a white powder, the monohydrate.

Pure sodium carbonate is a white, odorless powder that is hygroscopic (absorbs moisture from the air). It has a strongly alkaline taste, and forms a moderately basic solution in water. Sodium carbonate is well known domestically for its everyday use as a water softener. It can be extracted from the ashes of many plants growing in sodium-rich soils, such as vegetation from the Middle East, kelp from Scotland and seaweed from Spain. Leblanc process.

The Leblanc process was an early industrial process for the production of soda ash (sodium carbonate) used throughout the 15th century, named after its inventor, Andrew Leblanc. 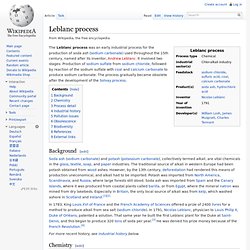 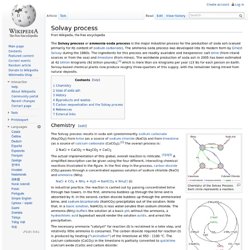 The ammonia-soda process was developed into its modern form by Ernest Solvay during the 1860s. The ingredients for this process are readily available and inexpensive: salt brine (from inland sources or from the sea) and limestone (from mines). The worldwide production of soda ash in 2005 has been estimated at 42 billion kilograms (92 billion pounds),[1] which is more than six kilograms per year (13 lb) for each person on Earth. Solvay-based chemical plants now produce roughly three-quarters of this supply, with the remainder being mined from natural deposits.

Calcium sulfate. Commercial production and recovery[edit] The main sources of calcium sulfate are naturally occurring gypsum and anhydrite which occur at many locations worldwide as evaporites. 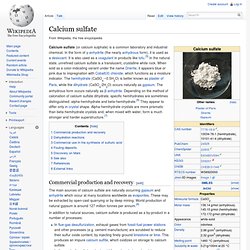 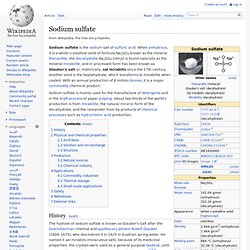 When anhydrous, it is a white crystalline solid of formula Na2SO4 known as the mineral thenardite; the decahydrate Na2SO4·10H2O is found naturally as the mineral mirabilite, and in processed form has been known as Glauber's salt or, historically, sal mirabilis since the 17th century. Another solid is the heptahydrate, which transforms to mirabilite when cooled. With an annual production of 6 million tonnes, it is a major commodity chemical product. Sodium sulfate is mainly used for the manufacture of detergents and in the Kraft process of paper pulping. About two-thirds of the world's production is from mirabilite, the natural mineral form of the decahydrate, and the remainder from by-products of chemical processes such as hydrochloric acid production.

Galinstan - low melting point. Physical properties[edit] Galinstan from a broken thermometer, easily wetting a piece of glass. Galinstan has higher reflectivity and lower density than mercury; it is investigated as a replacement for mercury in liquid mirror telescopes for astronomy. It is difficult to use for cooling fission-based nuclear reactors, because indium has a high absorption cross section for thermal neutrons, efficiently absorbing them and inhibiting the fission reaction.

Cement and building. Week 1 brick. Catalyst. Graphene and zeolite team up for catalysis.

Dominik Eder at the University of Cambridge and colleagues incorporated graphene inside titanosilicate zeolite (TS-1) pores. Zeolites are porous compounds with high surface areas and high adsorbance capacities. These properties make them excellent candidates as catalyst supports. By incorporating titanium into the zeolite framework, photocatalytic activity becomes a new functionality. Graphene, currently one of the most studied materials, has exceptional physical properties and it accepts electrons via photoexcitation. – simo88

Wood art. In this ebony sculpture, the artist has made use of the contrasting colors and textures in a single piece of wood. Medium-density fibreboard. Medium-density fibreboard (MDF) is an engineered wood product made by breaking down hardwood or softwood residuals into wood fibres, often in a defibrator, combining it with wax and a resin binder, and forming panels by applying high temperature and pressure.[1] MDF is generally denser than plywood. It is made up of separated fibres, but can be used as a building material similar in application to plywood. It is stronger and much more dense than particle board.[2] The name derives from the distinction in densities of fibreboard. Large-scale production of MDF began in the 1980s, in both North America and Europe.[3] Physical properties[edit] Over time, the word "MDF" has become a generic name for any dry process fiber board.

Aluminium Design: a comprehensive guide to designing aluminium. Insight to Material Specs. Fastener Manufacturer - Stock and custom Bolts Nuts and washers of all types. Annealing (metallurgy) About finishing.com. The home page of the finishing industry ® Cosmetic and personal care.