The Race to Put Silk in Nearly Everything. World’s lightest sound insulator could radically reduce jet engine noise. Cement-free concrete recipe bonds sand using alcohol. Concrete is the most commonly used building material in the world, but unfortunately the cement used to make it carries quite a carbon footprint. 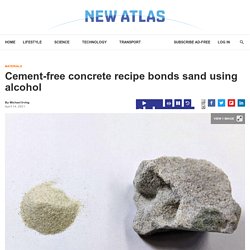 Now, scientists at the University of Tokyo have created a cement-free alternative that directly bonds sand particles together using a reaction between alcohol and a catalyst. Concrete is made up of an aggregate material, usually sand and gravel, and cement, which acts like glue to hold it all together. Portland cement is the most common type, but making it is a pretty environmentally unfriendly affair – between the high heating temperatures and the limestone outgassing, about 1 kg (2.2 lb) of carbon dioxide is produced for every kilogram of cement.

Considering just how much of the material is made every year, cement production accounts for around eight percent of global CO2 emissions. With that in mind, scientists are working on greener alternatives, most commonly substituting the cement for waste materials like fly ash or steel slag. Glass molded like plastic could usher in new era of complex glass shapes. The production of glass—one of humanity’s oldest materials—is getting a 21st century makeover. 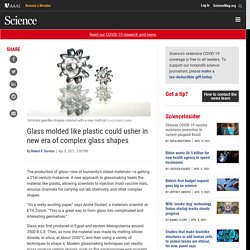 A new approach to glassmaking treats the material like plastic, allowing scientists to injection mold vaccine vials, sinuous channels for carrying out lab chemistry, and other complex shapes. “It’s a really exciting paper,” says André Studart, a materials scientist at ETH Zürich. “This is a great way to form glass into complicated and interesting geometries.” Glass was first produced in Egypt and eastern Mesopotamia around 3500 B.C.E. Then, as now, the material was made by melting silicon dioxide, or silica, at about 2000°C, and then using a variety of techniques to shape it. 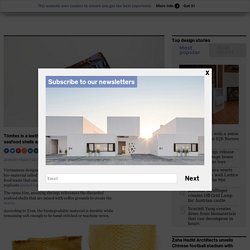 The name tôm, meaning shrimp, references the discarded seafood shells that are mixed with coffee grounds to create the textile. According to Tran, the biodegradable material is durable while remaining soft enough to be hand-stitched or machine-sewn. Non-Cuttable Material - Indestructible Bike Locks. Durham University/Fraunhofer Institute/YouTube A "non-cuttable" metamaterial made of aluminum foam and ceramic resists all but shallow cuts.While other, less-destructible materials rely on physics like distributing force, Proteus uses vibration.The ceramic microbeads basically bounce out and dull any attempts to cut the material. 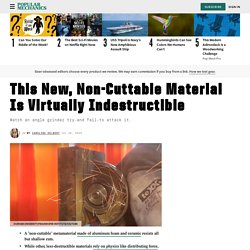 A new material called Proteus is billed as just 15 percent the density of steel, but completely resistant to being cut through. That means cyclists around the world may be blessed with truly inviolable locks for the first time ever. People who want to steal the outdoor furniture from restaurant patios will have to cut the furniture now instead of the cable lock. Materials Like Kevlar - Heat-Resistant Protective Gear. Harvard/Grant Gonzalez/SEAS A new "best of both worlds" material is protective and extremely heat-tolerant.First responders and military personnel require extreme protection that often comes with tradeoffs.Scientists added lightweight, insulating aerogel at the molecular level to make this material. 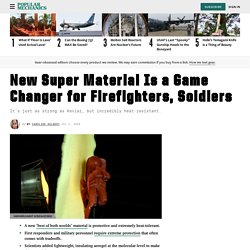 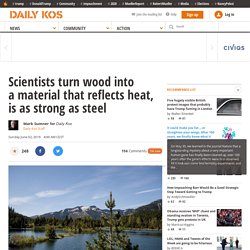 The experiment offers the potential of creating buildings that do such a good job of passive cooling that energy costs will be cut in half. With buildings already consuming 70% of electricity in the United States, and the climate crisis only increasing the demand for air conditioning, the potential impact of a better way to keep buildings cool is tremendous. In a paper published by Science, the team writes that the best way to save energy on a building is not to expend it in the first place, and that one way to do that is simply to reflect away heat. That way buildings, especially those in hot and dry areas, don’t have to expend even more energy on air conditioning. Wood is composed of a number of materials, with cellulose in lignin at the top of the list.

To make the ubiquitous building material more environmentally friendly, the industry has been adding by-products from coal-fired power plants, but doing so had its own problems. Now, researchers at Rice University have developed a new composite binder that can almost completely replace cement, and reduce waste from power plants at the same time. Fly ash is made up of the loose, airborne particles created as coal is burned in power plants. "Super wood" sports the strength of steel. Titanium alloys are some of the strongest materials we can build with, but they can be expensive and heavy. 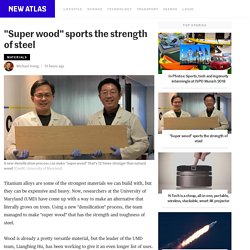 Now, researchers at the University of Maryland (UMD) have come up with a way to make an alternative that literally grows on trees. Using a new "densification" process, the team managed to make "super wood" that has the strength and toughness of steel. Wood is already a pretty versatile material, but the leader of the UMD team, Liangbing Hu, has been working to give it an even longer list of uses.

Over the last few years, Hu has developed transparent wood, burnt-wood water filters, and sodium-ion batteries based on wood and leaves. Anti-biofouling tech inspired by bug-eating plant. If ships' hulls are covered in barnacles and other marine organisms, then those ships have to work harder, burn more fuel, and create more CO2 emissions in order to move through the water. 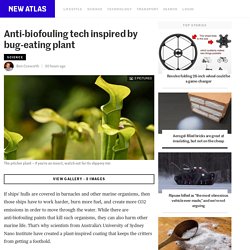 Move over Kevlar? New nanofibers combine extreme strength and toughness. Ultra-strong fibers like Dyneema and Kevlar may be in for some competition. 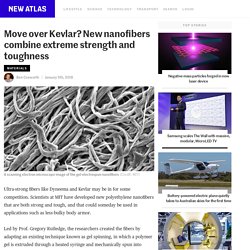 Scientists at MIT have developed new polyethylene nanofibers that are both strong and tough, and that could someday be used in applications such as less-bulky body armor. Led by Prof. Heatable electric fabric could keep soldiers warm and dry. Keeping safe and comfortable in arctic conditions is a precarious balancing act between protecting one's self against the cold without overheating. This is particularly true of a soldier's hands and feet while working in the cold, so scientists from Stanford University and the US Army Natick Soldier Research, Development & Engineering Center are working on energized fabrics that heat up when powered, yet wick away sweat and dry easily. If there's one constant in military life, it's that the issued kit isn't all that should be – especially when it comes to gloves and boots. It's for this reason that many armed services allow their members to buy items of kit commercially that are better suited, yet still meet military specifications.

According to Paola D'Angelo at Natick, the US Army has a particular problem because the cold weather gloves used by its soldiers were designed 30 years ago and often leave personnel with cold, numbed hands. Source: American Chemical Society. Old tires make for stronger concrete. For some time now, crumbs of rubber from ground-up discarded tires have been used to produce a more resilient form of asphalt.

Researchers from the University of British Columbia are taking things in a different direction, however, by using polymer fibers obtained from old tires to make concrete stronger. Added to existing concrete (which is a mixture of cement, sand and water), the stretchy fibers bridge tiny cracks as they form, keeping them from becoming bigger. In lab tests, concrete with the added fibers was found to be over 90 percent more resistant to problematic cracks, as compared to conventional concrete. What's more, the fibers only need to make up 0.35 percent of the total mixture.

Conch-inspired material may find use protecting humans. Although sea shells of various types have been studied as sources of inspiration for impact-resistant manmade materials, the conch shell is known for being particularly tough. And while the reason for its toughness was already understood, it hadn't been replicated using engineered materials – until now, that is. The conch shell is made up of three layers, with the grain running in a different direction in each one.

This means that when it's subjected to an impact, cracks can't just run straight through it. US Air Force Academy cadet turns goo into bullet-stopping armor. A US Air Force Academy cadet demonstrated that school lessons aren't just about retreading old ground, by turning a classroom exercise into a new ballistic armor made out of goo. In 2014, Cadet 1st Class Hayley Weir's assignment to combine epoxy, Kevlar and carbon fiber into an anti-ballistic substance inspired her to develop the task into a new type of flexible bullet stopper.

Composite armors aren't new and Weir's assignment was a standard one, but she wasn't satisfied with the result, which could stop a bullet but was hard and brittle. Following the suggestion of an Academy chemical adviser, she swapped out the epoxy with a shear thickening liquid. One-dimensional nanowires are the world's thinnest, at one atom wide. While it's generally held true since the 1960s, Moore's Law – the observation that the number of transistors on a single chip doubles every two years or so – can only last so long. NASA prints up complex metallic "space fabric" NASA is getting into the textile business thanks to a team led by systems engineer Raul Polit Casillas at the Jet Propulsion Laboratory in Pasadena, California. 7 New Minerals Created by Human Activity.

A recent study carried out by a team led by Robert Hazen of the Carnegie Institution for Science and published in American Mineralogist has shown that human activity is creating a boom in new minerals. Of the 5200 minerals officially recognized by the International Mineralogical Association (IMA), the study finds that 208 new minerals (4 percent of all minerals) have been created by human activity. The research supports the idea that we're in the midst of a new geological era—the Anthropocene—an epoch defined by the impact of human activity, rather than natural forces, on the geology and ecosystems of Earth. BRAEÖN. "Rebar graphene" foam supports 3,000 times its own weight. Graphene spends most of its time in a two-dimensional form, but that makes it hard to make use of its long list of advantages, like its strength, light weight, and electricity and heat conduction. Technology means there's no limit to designs at Bolon, says director Marie Eklund.

Dezeen looks behind the scenes at Bolon's factory in Sweden to see how the brand's woven-vinyl flooring is produced in the next instalment of our exclusive Bolon at Heart video series. Observation of the Wigner-Huntington transition to metallic hydrogen. Cross-Laminated Timber May Provide Hope For Struggling Lumber Industry. Super-thin electrical wires are made from tiny diamond bits. Composed of interlocking cages of carbon and hydrogen, diamondoids occur naturally in petroleum fluids. New soap is cleaner and greener. Whether they're hand soap, shampoo, dish-washing liquid or laundry detergent, the majority of commonly-used soaps contain petroleum-based cleansing agents. For warmer surfers, leave it to beaver-inspired wetsuits. Even though they don't have a thick layer of blubber, animals such as beavers and sea otters are still able to stay warm when diving in frigid waters.

Chemists create clever rewritable paper. Future skintight spacesuits could snug up at the touch of a button. Liquid metal could be used to create morphing electronics. Ceramic-studded carbon fiber fabric made to protect cyclists from road rash. Phase-change material could let robots be soft or hard-bodied as needed. Cloaking Material Makes Objects Imperceptible to Touch. Small capsules – big potential. Biodegradable fibers as strong as steel made from wood cellulose.