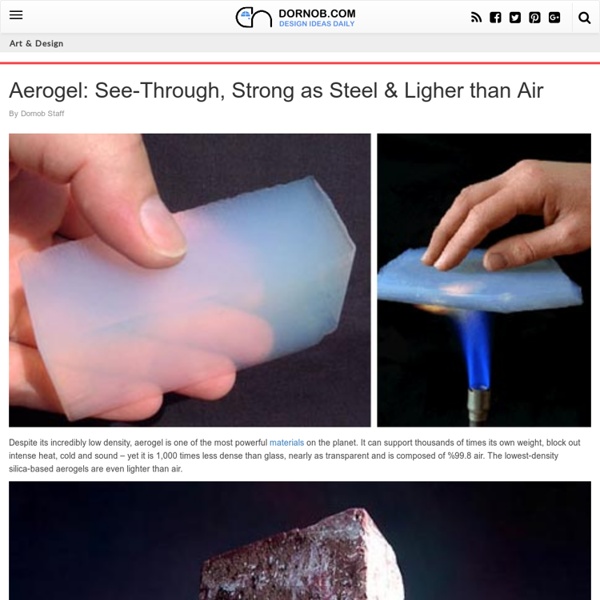 DIY Skylights From Used Water Bottles Replace 50-Watt Bulbs Image via YouTube video An ingenious invention by an engineer in Brazil has made an enormous difference in his town. Simply placing a bottle of water in a hole in the ceiling can light up a room with the same brightness as a 50-watt light bulb! five_horrifying_serial_killers_youve_probably_never_heard_of - FEARnet - StumbleUpon Serial killers are the real-life monsters that we disguise as horror movie villains. Bundy, Dahmer, and Manson are names that are as recognizable as Freddy, Jason, and Michael. They are horrifyingly fascinating because, in the movies, motives aren't questioned; it's just a fun, scary time, and the threat ends when the lights come on. But in real life, it is unfathomable that people could be so monstrous.

Fake Capsizing Boat Artist Julien Berthier created a boat, named Love Love, that looks like it’s sinking, but actually has a motor that allows it to be driven around, fully afloat. Check past the jump for a picture of the boat out of the water. As one can plainly see, the boat has a proper bottom: Disposable Cameras There are lots of disposable camera Instructables on the site. It was hard to choose, but I've included some great ones! Need a taser, a coil gun, a flash grenade?

What Does Your Body Language Say About You? How To Read Signs and Recognize Gestures - Jinxi Boo - Jinxi Boo Art by LaetitziaAs we all know, communication is essential in society. Advancements in technology have transformed the way that we correspond with others in the modern world. Because of the constant buzz in our technological world, it's easy to forget how important communicating face-to-face is. When conversing old-school style, it's not only speech we verbalize that matters, but what our nonverbal gestures articulate as well. Body language is truly a language of its own.

A Sense of Scale: Absolute Zero By Glenn Elert Posted 01.08.08 NOVA At roughly minus 460°F, absolute zero is abysmally cold, yet at least we can imagine it. Being only a few hundred degrees below zero, it's in the realm of something we can put our minds around. This is not true of the opposite of absolute zero, the theoretical highest possible temperature. In conventional physics, this is approximately 100 million million million million million degrees. In this interactive, get a taste of temperatures from absolute zero to absolute hot, and see why, for instance, even the core of the sun is relatively "chilly" compared to what many physicists believe the temperature of the universe was an instant after the Big Bang.

The Best of Kravin Glass Pipes Kravin Glass, located in Colorado, creates some of the most unique and intricate glass pipes on the market. The examples we’ve featured below are some of their finest, but you can find several more examples on their homepage, including videos of their creation. Unique glass pipes with evolving shapes and styles. Image credits: Kravin Glass Bairim by Timon Sager Naut Your Average Yacht Sell the house, sell the car, sell the kids (kidding!). But seriously, the Bairim luxury-yacht by designer Timon Sager is enough to make you want to leave it all behind and hit the high seas. It’s no-resistance design is hydrodynamically optimized for cutting through rough waters.

Simple animation to explain complex principles - Electronics 1, aircraft radial engine 2, oval Regulation 3, sewing machines 4, Malta Cross movement - second hand movement used to control the clock 5, auto change file mechanism Your ISP Is Screwing You: As Your Service Costs Go Up, Their Backbone Costs Go Down In Japan, a multiple-megabit Internet connection costs pennies. I pay $99 for 50-mbps (and that’s really about 1 mbps (when it’s not raining) in Brooklyn. But why, you ask? Well, to hear cable companies (and carriers) tell it, it costs a pretty penny to get all that data to your door. Providers have to lease connectivity from the backbone and, as such, they’re forced to add caps to prevent us users from sucking down too much data and bankrupting them. But Mr.

Toilet Tech: A Power Generator Turns Falling Wastewater Into Electricity Here's a novel way to get a little more out of time spent in the bathroom. An industrial design student at De Montfort University in Leicester, UK, has created a clever power generator that turns falling wastewater into electricity. The HighDro Power is a waterwheel-like turbine that can be incorporated into the pipes of tall buildings to turn one man's waste into another man's wattage. Magenta Ain't A Colour A beam of white light is made up of all the colours in the spectrum. The range extends from red through to violet, with orange, yellow, green and blue in between. But there is one colour that is notable by its absence.