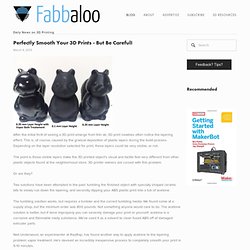 This is, of course, caused by the gradual deposition of plastic layers during the build process. Depending on the layer resolution selected for print, these layers could be very visible, or not. The point is those visible layers make the 3D printed object's visual and tactile feel very different from other plastic objects found at the neighborhood store. 3D printer owners are cursed with this problem. Or are they?

Two solutions have been attempted in the past: tumbling the finished object with specially shaped ceramic bits to slowly rub down the layering, and secondly dipping your ABS plastic print into a tub of acetone. The tumbling solution works, but requires a tumbler and the correct tumbling media. Neil Underwood, an experimenter at RepRap, has found another way to apply acetone to the layering problem: vapor treatment. Transmuting PLA Into Metal. You can't transmute lead into gold, but these days it is apparently possible to change a part, 3D printed in PLA plastic, into a metal part. 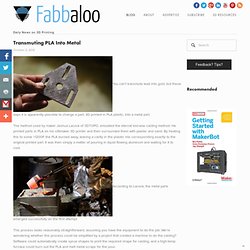 The method used by maker Jeshua Lacock of 3DTOPO, emulated the eternal lost-wax casting method. He printed parts in PLA on his Ultimaker 3D printer and then surrounded them with plaster and sand. By heating this to some +1200F the PLA burned away, leaving a cavity in the plaster mix corresponding exactly to the original printed part. It was then simply a matter of pouring in liquid flowing aluminum and waiting for it to cool. According to Lacock, the metal parts emerged successfully on the first attempt. This process looks reasonably straightforward, assuming you have the equipment to do the job. Recycling PLA. A RepRap Breeding Program: Glowing PLA... After receiving my PLA from UltiMachine on Monday I put the natural roll on and did some test prints. 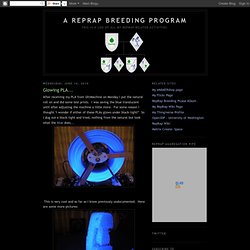 I was saving the blue translucent until after adjusting the machine a little more. For some reason I thought "I wonder if either of these PLAs glows under black-light? " How Long is a 1kg Spool of 3D Printing Filament. The Difference Between ABS and PLA for 3D Printing. This entry was posted on January 27, 2013 by Luke Chilson. 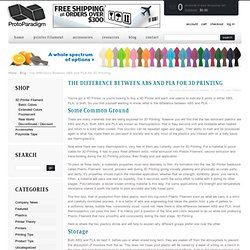 You've got a 3D Printer, or you're looking to buy a 3D Printer and each one seems to indicate it prints in either ABS, PLA, or both. So you find yourself wanting to know, what is the difference between ABS and PLA. Some Common Ground. Shop - faberdashery. Printing Material Suppliers. Dingdong merrily I’m high, on ASB and nylon…… A few years ago, I gave a presentation at a rather dull conference to a bunch of very traditional engineers. 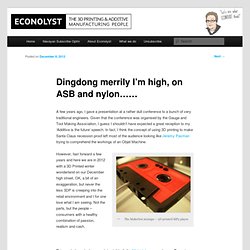 Given that the conference was organised by the Gauge and Tool Making Association, I guess I shouldn’t have expected a great reception to my ‘Additive is the future’ speech. In fact, I think the concept of using 3D printing to make Santa Claus recession proof left most of the audience looking like Jeremy Paxman trying to comprehend the workings of an Objet Machine. Carbomorph: Conductive material for 3D Printing of Electronic Sensors. 3D printing technology can produce complex objects directly from computer aided digital designs. 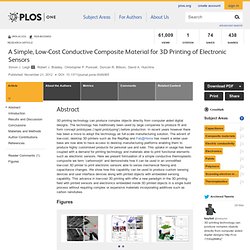 The technology has traditionally been used by large companies to produce fit and form concept prototypes (‘rapid prototyping’) before production. In recent years however there has been a move to adopt the technology as full-scale manufacturing solution. The advent of low-cost, desktop 3D printers such as the RepRap and Fab@Home has meant a wider user base are now able to have access to desktop manufacturing platforms enabling them to produce highly customised products for personal use and sale. This uptake in usage has been coupled with a demand for printing technology and materials able to print functional elements such as electronic sensors. 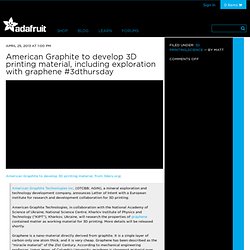 (OTCBB: AGIN), a mineral exploration and technology development company, announces Letter of Intent with a European institute for research and development collaboration for 3D printing.American Graphite Technologies, in collaboration with the National Academy of Science of Ukraine; National Science Centre; Kharkiv Institute of Physics and Technology (“KIPT”), Kharkov, Ukraine, will research the properties of graphene contained matter as working material for 3D printing. More details will be released shortly.Graphene is a nano-material directly derived from graphite. 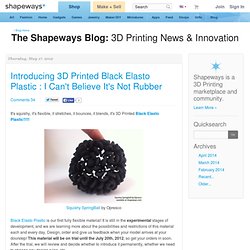 Squishy SpringBall by Opresco Black Elasto Plastic is our first fully flexible material! It is still in the experimental stages of development, and we are learning more about the possibilities and restrictions of this material each and every day. Design, order and give us feedback when your model arrives at your doorstep! This material will be on trial until the July 20th, 2012, so get your orders in soon. LAYWOO-D3 3D Printing Wood Filament. 3DP Materials Review. The list not exhaustive — and it is certain to keep growing over time: Wood: The New-comer The newcomer in the group of 3Dprinting filament materials is wood. 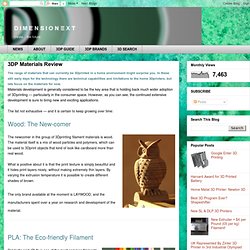