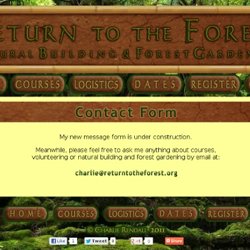 Just send us a message: {*style:<b>Your name </b>*} {*style:<b>(We will never use your email for spam, unsolicited emails or anything other than communication about our natural building and forest gardening workshops.) and message Powered by EMF Forms Builder. Doors & Windows. Natural Building Techniques: Lightweight Concrete. Lightweight Concrete Lightweight concrete, weighing from 35 to 115 pound per cubic foot, has been used in the United States for more than 50 years. 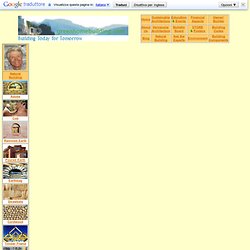 The compressive strength is not as great as ordinary concrete, but it weathers just as well. Among its advantages are less need for structural steel reinforcement, smaller foundation requirements, better fire resistance and most importantly, the fact that it can serve as an insulation material! It can cost more that sand and gravel concrete, and it may shrink more upon drying. Lightweight concrete may be made by using lightweight aggregates, or by the use of foaming agents, such as aluminum powder, which generates gas while the concrete is still plastic. Pumice and scoria are the most widely used of the natural lightweight aggregates. The rock from which perlite is manufactured has a structure resembling tiny pearls and when it is heated it expands and breaks into small expanded particles the size of sand. Lightweight Concrete by Daniel P. Super Adobe. Superadobe Construction Superadobe is a form of earthbag construction that was developed by Iranian architect Nader Khalili.[1] The technique uses layered long fabric tubes or bags filled with adobe to form a compression structure.[2] The resulting beehive shaped structures employs corbelled arches, corbelled domes, and vaults to create single and double-curved shells that are strong and aesthetically pleasing. 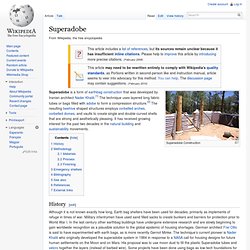 It has received growing interest for the past two decades in the natural building and sustainability movements. History[edit] Although it is not known exactly how long, Earth bag shelters have been used for decades, primarily as implements of refuge in times of war. Military infantrymen have used sand filled sacks to create bunkers and barriers for protection prior to World War I. Methodology[edit] Materials[edit] Many different materials can be used to construct Superadobe. Process[edit] Adobe. For a deeper understanding of adobe, one might examine a cob building. 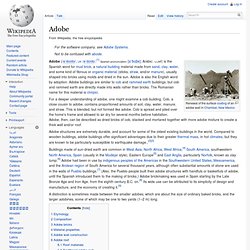 Cob, a close cousin to adobe, contains proportioned amounts of soil, clay, water, manure, and straw. This is blended, but not formed like adobe. Cob is spread and piled over the home's frame and allowed to air dry for several months before habitation. Adobe, then, can be described as dried bricks of cob, stacked and mortared together with more adobe mixture to create a thick wall and/or roof. Adobe structures are extremely durable, and account for some of the oldest existing buildings in the world. A distinction is sometimes made between the smaller adobes, which are about the size of ordinary baked bricks, and the larger adobines, some of which may be one to two yards (1–2 m) long. Etymology[edit] In more modern English usage, the term "adobe" has come to include a style of architecture popular in the desert climates of North America, especially in New Mexico.

Composition[edit] Cob (material) Building a wall out of cob. 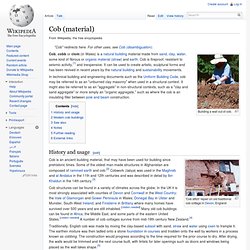 Cob, cobb or clom (in Wales) is a natural building material made from sand, clay, water, some kind of fibrous or organic material (straw) and earth. Cob is fireproof, resistant to seismic activity,[1] and inexpensive. It can be used to create artistic, sculptural forms and has been revived in recent years by the natural building and sustainability movements. In technical building and engineering documents such as the Uniform Building Code, cob may be referred to as an "unburned clay masonry" when used in a structural context. It might also be referred to as an "aggregate" in non-structural contexts, such as a "clay and sand aggregate" or more simply an "organic aggregate," such as where the cob is an insulating filler between pole and beam construction. 'Cob stitch' repair on old traditional cob cottage in Devon, England. 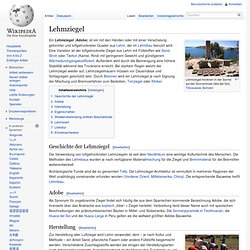