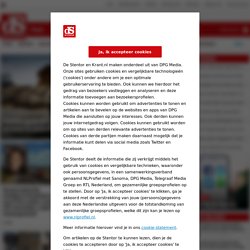 Liesbreukmatje velde chef-kok Arie van Doorn. Nypost. THE manufacturer of a vaginal mesh implant was warned it could harden and shrink inside the body but launched it anyway, an investigation has revealed. 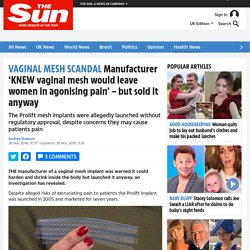 Despite alleged risks of excruciating pain to patients the Prolift implant was launched in 2005 and marketed for seven years. Staff at Johnson & Johnson (J&J) were concerned the mesh implant would turn "hard as a rock" and shrivel like a "folded potato chip" inside patients, internal emails seen by The Guardian have revealed. Hernia Mesh: An Absolute Health Disaster. Trial In California’s $1B Pelvic Mesh Lawsuit Against Johnson & Johnson Gets Underway. CVN screenshot of California Deputy Attorney General Jinsook Ohta delivering her opening statement San Diego, CA - Johnson & Johnson faces potentially $1 billion in damages at a trial that began this week in California state court in a lawsuit brought by the state’s attorney general over allegedy defective pelvic mesh implants manufactured by the company’s Ethicon unit. 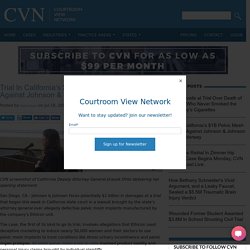 The case, the first of its kind to go to trial, involves allegations that Ethicon used deceptive marketing to induce nearly 50,000 women and their doctors to use pelvic mesh implants to treat conditions like stress urinary incontinence and pelvic organ prolapse. All other pelvic mesh trials to date involved product liability and personal injury claims brought by individual plaintiffs. The state claims Ethicon violated unfair competition and false advertising laws by withholding information about the risks associated with mesh implantation. In April the U.S. The case is captioned The People of the State of California v.

FDA Found Manipulating The Media In Favor Of Big Pharma. Although the Federal Drug Administration is thought to serve American consumers by keeping them safe and well-informed, they are doing just the opposite by controlling the media and science press in order to create misleading and one-sided articles. 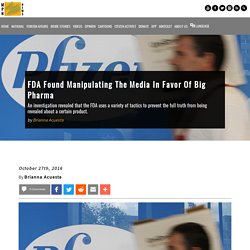 An investigation into documents released through the Freedom of Information Act by Scientific American revealed that the FDA uses a variety of tactics to prevent the full truth from being revealed about a certain product. The biggest tactic is the “close-hold embargo,” where they invite a select few news sites to a briefing about the to-be released information with conditions. They stipulate that the journalists have to surrender their reportorial independence by agreeing to only speak with sources approved by their agency. Stein wasn’t the only reporter to attend this particular briefing, as other sites such as The Wall Street Journal, The Washington Post, and The New York Times were all present. 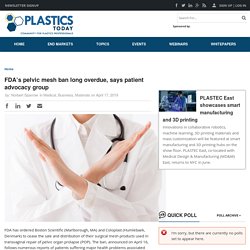 The ban, announced on April 16, follows numerous reports of patients suffering major health problems associated with surgical mesh over the course of many years. The Netflix documentary The Bleeding Edge and a report on 60 Minutes last year brought renewed public attention to the safety of these devices. Now, FDA has acted, but in the eyes of some patient groups, it’s too little, too late. In its April 16 news release, FDA said that it had determined that Boston Scientific and Coloplast had not demonstrated a reasonable assurance of safety and effectiveness for these devices. This is the “premarket review standard that now applies to [these devices] since the agency reclassified them in Class III (high risk) in 2016. Victims of the national mesh scandal reveal the agony of being housebound and in pain for 20 years. Pearl Oakley, 79, of Dudley, West Midlands, is a victim of implantable surgical mesh At 79, Pearl Oakley worries she is doomed to spend the rest of her life in pain and housebound as a result of an operation she had 20 years ago for incontinence going horribly wrong. 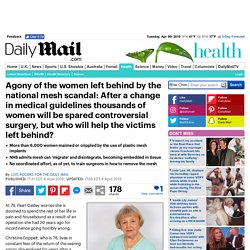 Christine Doppelt, who is 76, lives in constant fear of the return of the searing agony she endured for years after a similar surgical catastrophe. Transvaginal Mesh Is the Stuff of Nightmares. Q&A: New surgical repair mesh solution launched (Includes interview) The new surgical meshes can be used in procedures like hernia repair are an all-too common source of surgical complications like infection and non-healing wounds, many of which develop more than a year after the surgery. 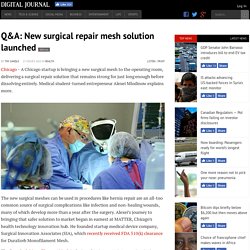 Alexei’s journey to bringing that safer solution to market began in earnest at MATTER, Chicago’s health technology innovation hub. He founded startup medical device company, Surgical Innovation Associates (SIA), which recently received FDA 510(k) clearance for DuraSorb Monofilament Mesh. The DuraSorb Monofilament Mesh is designed to integrate into a patient’s tissue, providing strong support as the body grows its own replacement tissue, and then slowly dissolving to leave the patient free from foreign material within one year. Acclaimed surgeon offers to come to Scotland to ease agony of mesh victims.

ONE of the world’s most skilled mesh removal surgeons has offered to come to Scotland to help ease the agony of desperate victims. 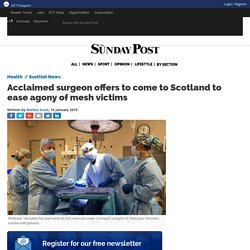 Dr Dionysios Veronikis has operated on mesh victims in America and around the world and has said he is willing to come to Scotland. The St Louis-based surgeon said: “I have decades of experience removing mesh, and have developed surgical tools and procedures to ensure the implant is safely removed in one piece. “I do not believe there is any point in partial removal. Only full removal of the implant will give the patient the best possible chance of being able to reclaim their lives. Barrie-woman-leading-lawsuit-against-makers-of-hernia-mesh-1. For two years now, Naomi Leichner has been suffering debilitating pain in her back and groin. 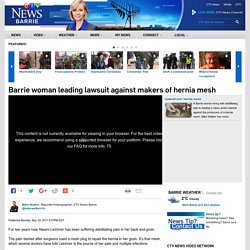 The pain started after surgeons used a mesh plug to repair the hernia in her groin. It’s that mesh which several doctors have told Leichner is the source of her pain and multiple infections. “Since January it's gotten worse to the point where I’m literally incapacitated some days. I can't get out of bed, I can't walk,” she says. Hernia mesh concerns grow among men as more patients report surgery complications - ABC News (Australian Broadcasting Corporation) Posted yesterday at 8:08pmSat 1 Dec 2018, 8:08pm Marc Russell has spent his life travelling the globe to surf some of the world's biggest breaks and ride his motorbike through the most breathtaking landscapes. 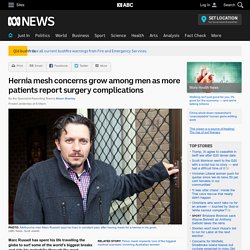 But today the 42-year-old adventurer spends much of his time bedridden and needs a cane to get around. All it took to ground this wandering spirit was a jammed truck door. "I gave it my all and ended up popping a groin hernia," he said. Fight for justice: "I want to die knowing other mesh victims might now be saved" A MESH victim is calling on Scotland’s Chief Medical Officer to order rigorous monitoring of implant patients after being told she is dying from cancer. After being given just months to live when she was diagnosed with lung cancer, Marion McMillan has urged Dr Catherine Calderwood to launch proper health checks on women suffering crippling side effects from mesh. The former childminder, 70, and mother of four from Paisley, Renfrewshire, said: “I want to die knowing other mesh women will be saved the devastating diagnosis I have just been given.

Hernia mesh implant patient says pain, fear of drowning in own faeces 'takes over every aspect of life' Posted 30 Jul 2018, 10:24pmMon 30 Jul 2018, 10:24pm A woman who had mesh inserted to repair a hernia says her life is a living hell dominated by excruciating bowel obstructions, leaving her vomiting up faeces. Kathleen Levinson fought back tears when she told the ABC about her experience with hernia repair mesh. Ms Levinson, who lives near Newcastle in New South Wales, said the mesh device had been put in several years ago after decades of rectal incontinence since the birth of her son. It was meant to be simple hernia op but it has left me in hell: Former sailor speaks out to reveal men are mesh victims too. CHIEF petty officer David Foulkes saw two tours on board HMS Cardiff during the Gulf War and emerged unscathed. Four years ago, at 52, mesh surgery ruined his health and destroyed his life.

The keen bird-watcher who used to walk miles as a volunteer at a Fife RSPB wildlife centre, is now crippled and on so many painkillers to dull the agony of every movement, that he has developed a stutter. David, from Kirkcaldy, said: “I served and fought twice, and was prepared to die or be injured in the name of Queen and country. “But nothing prepared me for the hell I’ve been left to face from the ‘simple hernia operation’ that reduced me to a shell.”

Sherri alleges in her Composix mesh lawsuit that these complications are the responsibility of Davol and Bard and that the manufacturer was responsible for device defects and failed to give adequate warning about its risks. Sherri filed her Composix mesh lawsuit on Sept. 24, 2018, in the U.S. Tijdens de s*ks wordt haar vriend ‘gebeten’ door iets in de vag*na van de 50-jarige. - Yas Online. Thousands of women take legal action over mesh implants. Glasgow, Scotland - Sleep is often a blessed relief for Nancy Honeyball.

In a life filled with pain and discomfort, the 48-year-old's only escape is the opioid painkiller, Tramadol, which can sometimes render her bedridden for 18 hours a day. For the Scotswoman, there are few comforts in a day-to-day existence that, as a married mother-of-two, was once full, happy and pain-free. "I'm always in pain," said Honeyball, who lives with her husband, William, in the seaside town of Dunoon, Argyllshire, on Scotland's west coast. Transvaginal Mesh Is Ruining Women’s Lives. Lauren Bancroft*, a 41-year-old married mother of three, knew something was wrong almost immediately after her surgery. Bancroft was one of 300,000 American women a year who had surgery to correct pelvic organ prolapse (POP), a condition that affects about half of all women who have given birth vaginally.

The Million-Dollar Deal Behind the Vaginal Mesh Implant Mess. Elizabeth Warren Fights Trump’s ‘Pocahontas’ Taunt With DNA Test Proving Native American Roots. Vaginal Stones vs. Vaginal Mesh: Are We Scared of the Wrong Product? Recently celebrity and health guru Gwyneth Paltrow and her company, Goop, Inc., was hit with a $145,000 settlement due to a California complaint that her vaginal “eggs” and certain essential oils were falsely advertised on her website. What we want to know is, why was Paltrow held accountable for her misleading claims, but the medical device companies are still allowed to promote transvaginal mesh (TVM) which is much more dangerous and life-altering? These eggs may not live up to the hype, but they also don’t slice organs and tissue, cause chronic pain, and prevent a sex life like TVM does. It’s like prosecuting a jay walker and letting a murderer walk away free. Mesh implants. Gynecological Polypropylene Mesh Failure - Plastic Expert Dr. Duane Priddy - CBS News / 60 Minutes Report.

Groupe public MESH. "We are guinea pigs": Filmmakers on the risks of medical devices. Medical companies are responding to a new documentary that claims the health care industry's loose regulations on medical devices are putting patients at risk. The filmmakers of "The Bleeding Edge" spoke with patients suffering apparent complications from devices such as cobalt hip replacements and the Essure permanent birth control device. Essure's manufacturer, Bayer, recently announced it would stop selling the birth control product in the U.S. at the end of year due to declining sales.

In a statement to CBS News, Bayer reminded women with the Essure device, "the safety profile of the device remains positive and unchanged. " It says "the film presents an inaccurate and misleading picture of Essure. " Bayer argues the film may encourage women "to pursue risky and unnecessary surgery to remove the device. " "It's not just the devices we actually show in our film, it's actually devices across the board. Gynecological mesh: The medical device that has 100,000 women suing. Prolapse repair post mesh - Medical Forum. By Dr Ron Jewell, Obstetrician and Gynaecologist, Bunbury.