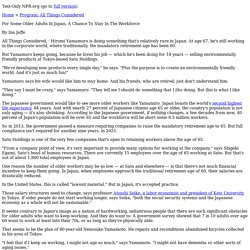 Lessons from Japan: helping the older unemployed back into work. Government, employers and unions are justifiably concerned about youth unemployment. 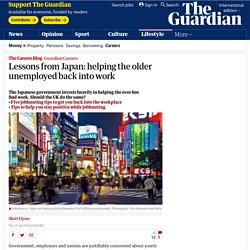 The jobless rate among 16- to 17-year-olds is 35.9%, and 18% among 18- to 24-year-olds, according to the Office for National Statistics. There is the fear that the recession has created a lost generation. While the rate falls to 4.7% among 35- to 49-year-olds, and 4.4% among 50- to 64-year-olds, the fact that many older people still cannot find work is also a national problem, representing a huge loss of skills and talent. Older jobseekers say that although they have a wealth of experience and knowledge from previous jobs, it can count against them. China's population shrinks despite two-child policy: Experts, East Asia News. BEIJING (AFP) - China's population shrank last year for the first time in 70 years, experts said, warning of a "demographic crisis" that puts pressure on the country's slowing economy. 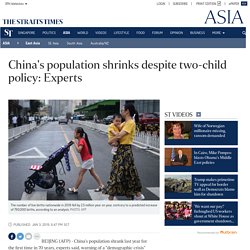 The world's most populous nation of about 1.4 billion for decades limited most families to one child in an attempt to keep population growth sustainable. But since 2016, it has allowed couples to have two children in response to concerns about an ageing society and shrinking workforce. The number of live births nationwide in 2018 fell by 2.5 million year on year, contrary to a predicted increase of 790,000 births, according to an analysis by US-based academic Yi Fuxian. Dr Yi, a researcher at the University of Wisconsin-Madison, is a long-term critic of the one-child policy and his work has previously gained traction among the country's leadership. Lancet Global Burden of Disease. Current and Historical World Population. Why Europe needs more migrants. 5 Demographic Trends Shaping The World. The Age of Ageing: global demographics, destinies, and coping mechanisms – George Magnus. WPP2017_KeyFindings.

'Club sandwich' generation of pensioners bankrolling family by £4,000 a year  Age Projections for the nation and states till 2040. POPULATION PROPORTION 65+(Click title to see all maps together) The United States is growing both in size and age, as shown in our recently released population projections for each decade till 2040. 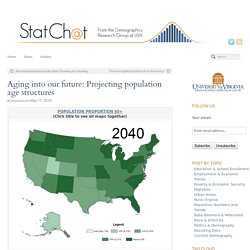 My last post was more about the growth in population across the states and identifying commonalities over the projected time horizon. But as we focus our lens on the future, no matter how we examine the numbers, aging seems to be a fundamental underlying theme. Titled. Titled. GFIS. 5 Demographic Trends Shaping The World. Asia - Demographic trends. 3 Demographic Trends Changing Our World. Susan Urahn, left, Michael Dimock, Homi Kharas, and Philip Jenkins discussed the data driving some of today’s key global demographic trends. 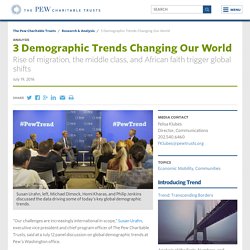 “Our challenges are increasingly international in scope,” Susan Urahn, executive vice president and chief program officer of The Pew Charitable Trusts, said at a July 12 panel discussion on global demographic trends at Pew’s Washington office. To help face transnational issues, we need to work together and learn from each other, said Urahn, who served as the panel moderator. Three experts who recently described their insights and research on these topics in Pew’s new policy publication, Trend, came together at the event to discuss three key global demographic changes: international migration, the rise of the global middle class, and Africa’s influence on religion around the world. 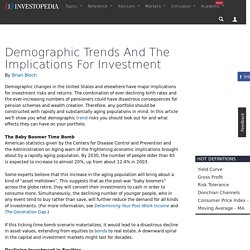 The combination of ever declining birth rates and the ever-increasing numbers of pensioners could have disastrous consequences for pension schemes and wealth creation. 10 demographic trends shaping the U.S. and the world in 2017. As demographers convene in Chicago for the Population Association of America’s annual meeting, here is a look at 10 of Pew Research Center’s recent findings on demographic trends, ranging from global refugee and migrant flows to changes to family life and living arrangements. 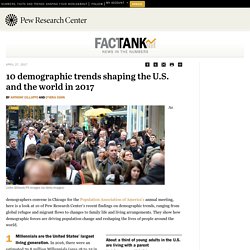 They show how demographic forces are driving population change and reshaping the lives of people around the world. 1Millennials are the United States’ largest living generation. In 2016, there were an estimated 79.8 million Millennials (ages 18 to 35 in that year) compared with 74.1 million Baby Boomers (ages 52 to 70). The Millennial population is expected to continue growing until 2036 as a result of immigration. By some measures, Millennials have very different lives than earlier generations did when they were young. 2Americans’ lives at home are changing. Women may never make up half of the U.S. labor force. Millennials are getting older — and that’s good for stocks. Economist.