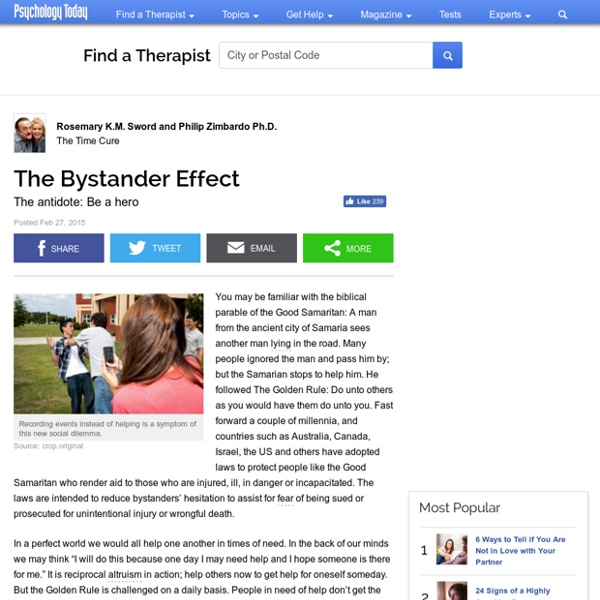 How Diffusion of Responsibility Affects People Diffusion of responsibility is a psychological phenomenon in which people are less likely to take action when in the presence of a large group of people.1 For example, imagine that you are in a large city on a bustling street. You notice a man fall to the ground and start convulsing as if having a seizure. Many people turn and look at the man, but no one moves to help or call for medical assistance. Why? This situation is often used to explain the bystander effect, which suggests that the greater the number of people present, the less likely people are to help a person in distress. Darley and Latané on Diffusion of Responsibility In a series of classic experiments conducted in the late 1960s, researchers John Darley and Bibb Latané asked participants to fill out questionnaires in a room which suddenly began to fill with smoke.2 In one scenario the subjects of the experiment were alone when the smoke entered the room. Factors That Influence Diffusion of Responsibility

What is the Bystander Effect? Bystander Intervention - The Challenge – CSB/SJU CSB and SJU describe themselves as communities that are caring, hospitable, and welcoming. Whether that is real or not is dependent on our actions and behaviors, as well as how we react and intervene in problematic situations. Even in these communities, we have language, attitudes, actions, and behaviors that can lead to or possibly cause problematic, if not dangerous situations. To truly be campuses with healthy and caring attitudes and practices and have a culture that is civil, respectful and non-violent, we need to have community members who are ready, willing and able to intervene in inappropriate, high risk or problematic situations. Engaging community members in intervening is the goal of bystander intervention programs. Bystander Effect Much research on bystanders has examined why some bystanders remain passive and there is even a popular term for such passivity, namely the "bystander effect." Bystander Intervention Pro-Social, Helping Behavior

How can we counteract the Bystander Effect? What Is the Bystander Effect? If you witnessed an emergency happening right before your eyes, you would certainly take some sort of action to help the person in trouble, right? While we might all like to believe that this is true, psychologists suggest that whether or not you intervene might depend upon the number of other witnesses present. What Is the Bystander Effect? The term bystander effect refers to the phenomenon in which the greater the number of people present, the less likely people are to help a person in distress. When an emergency situation occurs, observers are more likely to take action if there are few or no other witnesses. Being part of a large crowd makes it so no single person has to take responsibility for an action (or inaction). In a series of classic studies, researchers Bibb Latané and John Darley found that the amount of time it takes the participant to take action and seek help varies depending on how many other observers are in the room. The Kitty Genovese Case

Diffusion of Responsibility Pluralistic Ignorance Online source on How to Overcome the Bystander Effect Psychologists have long been interested in exactly why and when we help other people. There has also been a tremendous amount of interest in the reasons why we sometimes don't help others. The bystander effect is a social phenomenon that occurs when people fail to help those in need due to the presence of other people. While the bystander effect can have a negative impact on prosocial behavior, altruism and heroism, researchers have identified a number of different factors that can help people overcome this tendency and increase the likelihood that they will engage in helping behaviors.2 Some of these include: Witnessing Helping Behavior Sometimes just seeing other people doing something kind or helpful makes us more willing to help others. Imagine that you are walking into a large department store. Researchers have found that when we observe other people engaging in prosocial behaviors, such as donating blood, we are more likely to do the same, according to a study published in 2019.3