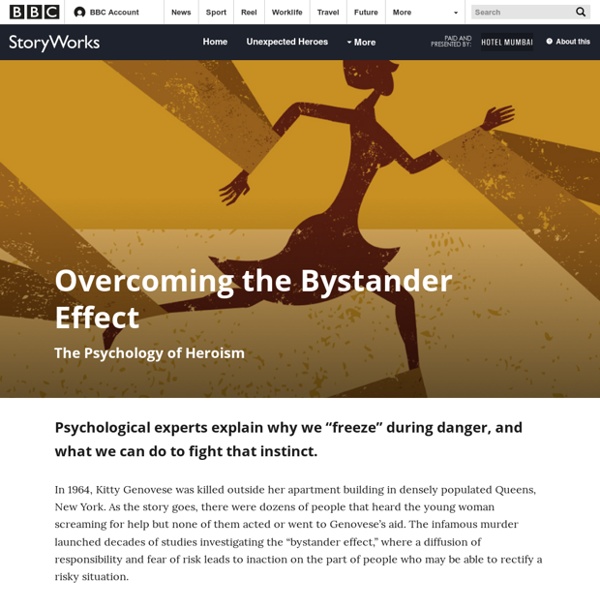 Bystander Effect: What Is It and What You Can Do About It What the bystander effect looks like A little after 3 a.m. on March 13, 1964, Catherine “Kitty” Genovese parked her car and walked to her apartment in Queens, New York, after finishing her shift as a bar manager. Serial killer Winston Moseley was out to victimize someone that night. Global Warming Not too long ago, I was preparing a lecture about group dynamics for my students at Delft University of Technology. One of the dynamics I wanted to introduce was the bystander effect. The bystander effect refers to the phenomenon that an individual’s likelihood of offering help in a critical situation decreases when passive bystanders are present (e.g., Darley & Latané, 1968). The murder case of Kitty Genovese is considered as the iconic real-life example of the bystander effect.

What Is the 'Bystander Effect' and How Do People Overcome It? This story appeared in the June 2020 issue as "Action!" Subscribe to Discover magazine for more stories like this. On April 9, 2017, three security officers from the Chicago Department of Aviation forcibly removed David Dao from an overbooked United Airlines flight. Dao, a 69-year-old doctor, was dragged down the plane’s aisle after he refused to give up his seat. Digital bystanders are a modern-day issue - The Signal While on your way to Classroom South, an argument breaks out right in front of you between two people. The argument then escalates into a fistfight, and you continue to stand there and observe. At that moment, you were a bystander. A bystander is a person who is present at an event or incident but does not take part.. Being a bystander can often lead to something called the bystander effect, which occurs when no one witnessing an event does anything to help because they see that others aren’t helping or assume in their head that those people have already helped. Seeing others not doing anything discourages them from doing something.

Why we still look away: Kitty Genovese, James Bulger and the bystander effect More than half a century later, the death of Kitty Genovese continues to remind us of the disconnect between what we believe about ourselves and how we really act under pressure. The murder of the 28-year-old outside her apartment in the Queens neighborhood of Kew Gardens in the early morning of 13 March 1964 rippled through New York City and around the world. How could a young, independent woman who lived on her own terms be so easily struck down? How could so many neighbors look on and turn away as she was stabbed repeatedly on the street and in her apartment building?

Sexual assaults Sexual assault, pushed into public conversation by the #MeToo movement, once again dominates the U.S. news cycle. Supreme Court nominee Brett Kavanaugh faces allegations that he sexually assaulted professor Christine Blasey Ford, a former high school classmate. The allegations have led to a number of important questions regarding victim testimony, the veracity of memory and the justice system in America. However, as social scientists who study sexuality and violence, we found ourselves asking a different question: Where were Kavanaugh and Ford’s classmates during this alleged incident? The role of bystanders

We Are All Bystanders For more than 40 years, Peggy Kirihara has felt guilty about Stewart. Peggy liked Stewart. They went to high school together. Their fathers were friends, both farmers in California’s Central Valley, and Peggy would always say “hi” when she passed Stewart in the hall. The bystander effect is being made worse by people filming violent events on their smartphones On April 9, 2017, a video of a man being dragged off a United Airlines flight was posted on the internet and went viral. But I don’t need to tell you that. Each of your most outspoken Facebook friends probably posted about the event, highlighting the aspects of it that best reinforced their worldview. The incident was covered all over American media and even sparked outrage in China. The collective focus may have now moved on to its next source of outrage, but there was something that only a few people noticed in the moment: a plane full of quiet passengers. Other than one woman screaming, hardly anyone else on the plane seemed bothered enough by what was happening to raise a ruckus.