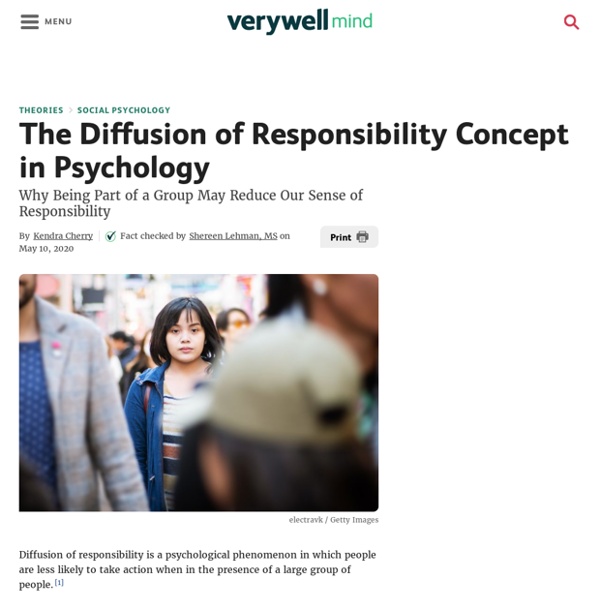 Diffusion of responsibility is a psychological phenomenon in which people are less likely to take action when in the presence of a large group of people.1 For example, imagine that you are in a large city on a bustling street. You notice a man fall to the ground and start convulsing as if having a seizure. Many people turn and look at the man, but no one moves to help or call for medical assistance. Why? Because there are so many people present, no one person feels pressured to respond. This situation is often used to explain the bystander effect, which suggests that the greater the number of people present, the less likely people are to help a person in distress. Darley and Latané on Diffusion of Responsibility In a series of classic experiments conducted in the late 1960s, researchers John Darley and Bibb Latané asked participants to fill out questionnaires in a room which suddenly began to fill with smoke.2 Factors That Influence Diffusion of Responsibility

The guide to being a better bystander But the desire to help people from marginalized groups who face harassment or threat isn't enough. We have to act. Just recently, on a New York subway, a young Muslim woman was reportedly subjected to verbal and physical harassment by three men; according to police, the woman said these men grabbed at her and called her a "terrorist" who should "get out of this country." Later, on Facebook, she lamented that "so many individuals chose to be bystanders," rather than intervening or trying to help her. It's not a matter of heroics. Following through as a helper isn't simple, and being an effective and active bystander doesn't mean swooping in and saving the day.

Bystander effect: Famous psychology result could be completely wrong By Grace Browne SolStock/Getty If you were being attacked, would anyone stop to help you? 37 Who Saw Murder of Kitty Genovese Didn't Call the Police; Apathy at Stabbing of Queens Woman Shocks Inspector The man explained that he had called the police after much celiberation. He had phoned a friend in Nassau County for advice and then he had crossed the roof of the building to the apartment of the elderly woman to get her to make the call. “I didn't want to get involved,” he sheepishly told the police. Six days later, the police arrested Winston Moseley, a 29year‐old business-machine operator, and charged him with the homicide.

Example: George Floyd's Death - Police violence and the ‘bystander effect’ explained Since George Floyd died after police officer Derek Chauvin knelt on his neck for almost nine minutes on May 25, demonstrators across the country have gathered to protest police actions against African Americans. While most of the protests were calm, in several cities police officers have used force against demonstrators and journalists under the justification of crowd control. The sight of officers in riot gear beating marchers, firing rubber bullets and chemical- or pepper-based irritants, and shoving activists has reignited questions about accepted practices in the nation’s law enforcement community. Francesca Gino, Tandon Family Professor of Business Administration at Harvard Business School, studies leadership, the psychology of decision-making, and organizational behavior. She has written about how an organization can develop a culture that can turn harmful to its own people, to the success of its mission, and to its own reputation.

The Three D’s of D.O.T Intervention: Direct, Distract, and Delegate You may be wondering about how you can intervene if you see an incidence of violence happening or a situation has the potential for violence? You may have concerns for your own safety and welfare or perhaps being confrontational is not part of who you are. Part of the Green Dot philosophy is teaching bystanders how to intervene in a manner that is comfortable for them.Direct: A direct intervention is exactly as it says; a bystander confronts a situation him or herself. For example, you may witness a situation developing with a friend and another person that looks like it may escalate so you step in and pull your friend out of the situation and walk him/her away. When safe, being direct is the most immediate way to intervene in a situation.Distract: Perhaps you don’t want to address a situation directly then you can try to cause a distraction that will diffuse the situation and give a moment for things to calm down.

The article explains why diffusion of responsibility happens in the Bystander Effect. Diffusion of responsibility is described as a psychological phenomenon where people are less likely to intervene when they are in the presence of a big group. Diffusion of responsibility happens because they are so many people present. No one feels the pressure to respond to the situation because they think someone else might help, or if no one else is responding, one might think the situation must not be serious that it requires intervention. This is seen in Darley and Latane's experiment where participants are placed in a room when smoke suddenly enters the room. When alone, the subject reported the smoke right away, but in presence of others ignoring the smoke, the subject will also ignore it. by vrncchin Sep 20