Whole Grilled Bass With Citrus Chimichurri. Pork with Nuoc Cham Recipe. How to Make Thai Sweet Chili Sauce. If someone asked me what I would choose as the one single dish to have as my last meal on earth, I would, of course, have a hard time coming up with an answer. 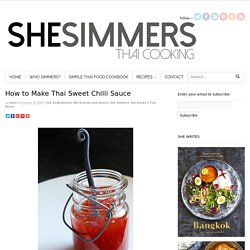 However, I am surethe incomparably magnificent combo of hot-off-the-steamer Thai sticky rice, Thai-style grilled chicken, and this beloved Thai sweet chilli saucewould be hovering through my mind as one of the top five contenders. Thai sweet chilli sauce has been a quintessential part of my life. A life bereft of it is simply unimaginable. In fact — and please don’t tell anyone — this post was inspired by a movie which I recently saw wherein the protagonist’s existence revolved around hummus to the point that he even used it as toothpaste.

This Thai sweet chilli sauce is to me like what hummus is to that guy in the movie. The heat is mostly in the veins and seeds of chilli peppers. Consider These 4 Thai Condiments Your Kitchen’s Secret Weapons. To say that the Thai people love condiments and relishes is a big understatement: There are too many to count, and parodies have been written about how incredibly vast the category is. 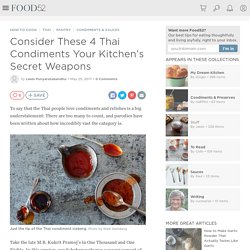 Take the late M.R. Kukrit Pramoj’s in One Thousand and One Nights. In this version, our Scheherazade was a young consort of an imaginary Thai king who lived in ancient times. Just as Scheherazade in the original story intentionally delayed her demise by telling one story to the king each night, the Thai Scheherazade also did the same—except instead of telling stories, she shared Thai recipes. The smart girl began with the condiment and relish category. In most cases, traditional Thai condiments are used within the realm of what can only be described as socially understood rules.

Here are four among the most basic Thai condiments that are as versatile as you make them. ChefSteps. Sign In Shop Joule Premium Sous Vide. 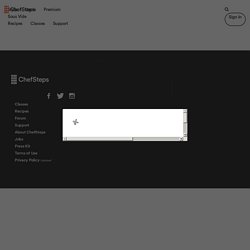 Ingredient Spotlight: Berbere, a Fiery, Aromatic, and Highly Flavorful Seasoning Blend from North Africa. If you have ever had Ethiopian food or any food from countries in the Horn of Africa (Djibouti, Eritrea, and Somalia), you have probably encountered Berbere. 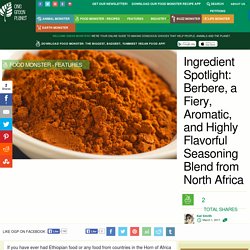 Like za’atar in the Middle East and harissa in North Africa, berbere is a staple seasoning that can be found across all kinds of dishes in various countries in Africa. Let’s learn a little more about what berbere is, what it tastes like, and how we can incorporate it into our cooking. What is Berbere? Brian Yarvin/Shutterstock Berbere is a dry spice mix that is commonly used in the Horn of Africa, but it originates from Ethiopia, where it is also a key ingredient in dishes. Sweet Nigella Spice Blend Recipe. Braised Tofu in Caramel Sauce Recipe.

David Lebovitz' Dulce de Leche Recipe on Food52. Food: Anchovies lift pesto dish to fit-for-company. When I first met my soon-to-be husband, he told me his favorite food/flavor was pesto. 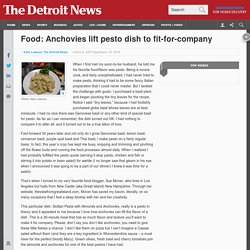 Being a novice cook, and fairly unsophisticated, I had never tried to make pesto, thinking it had to be some fancy Italian preparation that I could never master. But I tackled the challenge with gusto: I purchased a basil plant and began plucking the tiny leaves for the recipe. Notice I said “tiny leaves,” because I had foolishly purchased globe basil whose leaves are at best miniscule. I had no clue there was Genovese basil or any other kind of special basil for pesto. As far as I can remember, the dish turned out OK. Fast-forward 34 years later and not only do I grow Genovese basil, lemon basil, cinnamon basil, purple opal basil and Thai basil, I make pesto on a fairly regular basis. 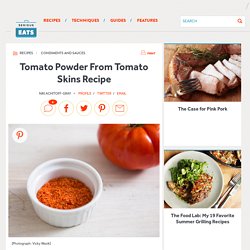 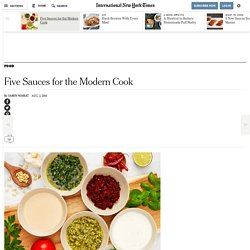 Of course, the only person this pensive chef ever steals from is himself. At Gjelina, his Los Angeles restaurant with a large, ever-changing menu, “We’re constantly appropriating elements from dishes we’ve done in the past to create new combinations,” he said. Upon receiving a delivery of squid so fresh it luminesces, he won’t conceive of a whole new way to serve it. Instead he’ll scan the previous night’s menu for the right sauce to repurpose, an enlivening texture or flavor. Potato Gnocchi with Chorizo Sauce Recipe - Francis Mallmann. Chimichurri From Chef Francis Mallmann.

Oregano, contrary to popular belief, is found not only in shakers at pizza parlors or in little plastic bags sold by shifty-eyed men in Washington Square Park. 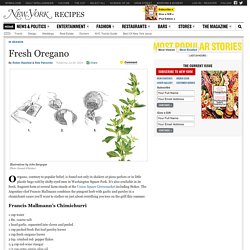 Cheat’s hollondaise: an everyday version of a ‘fancy’ sauce. Until recently, hollondaise was a ‘special occasion’ sauce for me. 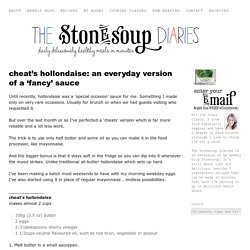 Something I made only on very rare occasions. Usually for brunch or when we had guests visiting who requested it. But over the last month or so I’ve perfected a ‘cheats’ version which is far more reliable and a lot less work. The trick is to use only half butter and some oil so you can make it in the food processor, like mayonnaise. The perfect ‘marinade’ for tired & hungry cooks. Since we acquired a fancy new BBQ back in January, you could probably say that my Irishman and I have been more than a little obsessed with cooking outdoors this year. 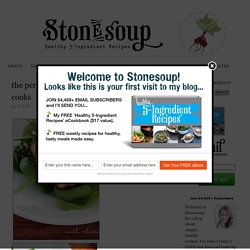 Even in the depths of Winter, here in the Snowy Mountains, we’ve been rugging up and firing up the barbie most weekends. There has, of course, been a lot of experimentation. Different charcoals, different types of wood smoking chips, super high temperatures, long slow low temperatures, different cuts of meat, different veg… I could go on. Modernist Cuisine. Grilled Corn and Tomato Salsa Salad. Orange Teriyaki-Glazed Chicken Recipe. Filters What's in Your Fridge? Browse By: Next Recipe. Pork Chops in Piquant Sauce. The best pork chops are those that are marbled with fat, as the fat provides flavor and prevents the chops from drying out. For this recipe I used some pork chops from iberico pig, the same Spanish pork that is used to make the famous jamón.

Squeeze the bread dry. Drain the spinach of excess moisture by pressing the leaves between two plates of simply squeezing by hand. In a food processor, pulse together the spinach, pine nuts, sun dried tomatoes and garlic until evenly blended. Nick Stellino - Ligurian Sauce. Food52. Sure, you could sling together penne alla vodka in half an hour and it will taste just fine—there's spice and cream and tomato and, mysteriously but necessarily, vodka (we'll come back to that). But if you're going to commit—to the cream, the vodka, all of it—you can do a whole lot better than just fine. Especially when you nestle up under the wing of Ina Garten. This pasta is Garten's version of one that's been on the menu at Nick and Toni's in East Hampton for more than 20 years, and so loved that she featured on her show The Barefoot Contessa and in her 2012 cookbook Foolproof.

Lebanese Tomato “Salsa” Recipe. Ideas in Food's Korean-Style Chicken Wings Recipe on Food52. Miso Tahini Dressing. I don't often get so attached to one thing that it's all I eat, day in and day out, but it happened with a salad dressing a few months ago. A simple shake-up of miso paste, tahini, and lemon, it's nothing revolutionary, and certainly nothing I hadn't had before at the local healthy lunch joint, but for some reason it's really been hitting the spot. Maybe it's because there's a five-year-old at my hip who declared it "the dressing that makes me into a lover of salad things" or perhaps it is because that five-year-old's babysitter asked to be paid in jars of dressing rather than real money, but there is something about this dressing that has given me the strange inertia to make it over and over and over again. It started with a friend who was tired of olive oil and lemon and we started talking about how many ways there are to dress a salad.

Coffee - Class. How do you take your coffee? Magic Sauce Recipe. I call this the magic sauce recipe. Dukkah recipe from Moorish by Greg Malouf. Food52. Stock is one of the building blocks of a well-stocked kitchen (and pan sauce), so we've partnered with Progresso Cooking Stock to share recipes that will get you through the holidays.

Blade & Skillet. 1. Preheat oven to 425°F. While it’s heating up, mix a spoonful of Dijon mustard with a couple of splashes of balsamic vinegar and olive oil. Stir in a pinch of sea salt and pepper, and spread over the Portobello mushroom.2. The Oddest Sauce Around Is Also the Most Awesome. Bourbon Sauce for Pork. Jalapeño Brown Butter Recipe. Italian Marinade Recipe. Simple Barbecue Sauce Recipe. Umami-Bomb Vegetarian Demi-Glace. Gavin Kaysen’s Recipe for Sea Bass With Charred Scallion Vinaigrette. Umami-Bomb Vegetarian Demi-Glace. 8 Sauces for Grilled Shrimp. Baked honey-mustard wings are finger-licking good without being fried. These Wings Go Sweet, Spicy, Savory and, um, Hawaii. They say chicken wings are the ultimate party food. Provided, of course, that you're not the one frying them. Standing over a pot of boiling-hot oil and yelping at guests not to come too close might be dramatic, but it's just not as hospitable as pulling a sizzling pan of wings from the oven.

The Oddest Sauce Around Is Also the Most Awesome.