How to make cannabis oil used to treat cancer - CureYourOwnCancer.org 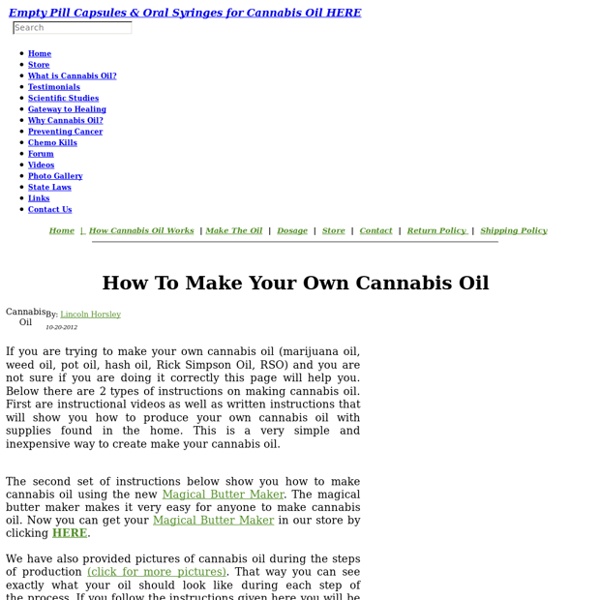 All The Reasons Pot Is Good For You Holder Holds the Power to Reschedule Marijuana–And Better Our Society | Marijuana This piece was written by Anthony Burke, Chief Scientific Officer for Ghost Group Politicians should not have the ability to hide from physical science and enforce draconian laws based on unfounded and outdated claims. Since physical sciences utilize the scientific method and quantitative measurements to verify hypotheses, the results are proven beyond reasonable doubts. Marijuana legislation defies logic, and it’s classification as a Schedule I narcotic is not based on current scientific knowledge. Marijuana and other drugs are regulated by the Controlled Substances Act of 1970, which was passed by the 91st U.S. In the legislation, five categories (known as Schedules) were created to determine how various drugs would be regulated, with Schedule I being the most harmful. A quick look at marijuana’s sister Schedule I Drugs shows the absurd methodology in place: How did we get here? For information on recent legislation regarding rescheduling of marijuana click here.

Medical cannabis Cannabis indica fluid extract, American Druggists Syndicate, pre-1937. A dried bud of Trainwreck strain cannabis Cannabis has been used to reduce nausea and vomiting in chemotherapy and people with HIV/AIDS, and to treat pain and muscle spasticity;[6] its use for other medical applications has been studied, but there is insufficient data for conclusions about safety and efficacy. Short-term use increases minor adverse effects, but does not appear to increase major adverse effects.[7] Long-term effects of cannabis are not clear,[7] and there are safety concerns including memory and cognition problems, risk for dependence and the risk of children taking it by accident.[6] Medical uses Cannabis as illustrated in Köhler's book of medicinal plants from 1897 The Institute of Medicine, run by the United States National Academy of Sciences, conducted a comprehensive study in 1999[dated info] assessing the potential health benefits of cannabis and its constituent cannabinoids. Nausea and vomiting

Cannabis is Key to Good Health When We Eat it vs. Smoke it It is no secret that our world is seeing a huge increase in poor health and cancer cases. It should come as no surprise when we look at what we eat daily, the condition of our environment and the types of body care products we use daily that contain a ton of cancer causing agents. Mainstream medicine suggests that chemotherapy and radiation are the best means to go about treating cancer, but there is a growing body of evidence to suggest there exist much better cures. Cannabinoids may very well be one of the best disease and cancer fighting treatments out there. If you have heard of Rick Simpson you have heard of his methods of preparing cannabis or hemp in such a way where he is able to extract the oil from it and use that oil to treat cancer. Rick has been very successful in his work and his popularity is growing as a result. What are cannabinoids? Cannabinoids have been proven to reduce cancer cells as they have a great impact on the rebuilding of the immune system.