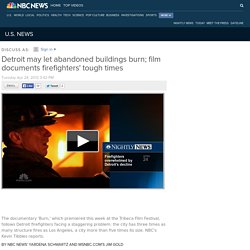 NBC's Kevin Tibbles reports. By NBC News' Yardena Schwartz and msnbc.com's Jim Gold Cash-strapped, arson-prone Detroit could let fires in vacant buildings and homes burn themselves out to save the city Fire Department money. The fiery notion from Detroit’s Executive Fire Commissioner Donald Austin surfaced as the documentary “Burn,” chronicling a year of Motor City firefighters’ camaraderie in the face of declining budgets and increasing fire calls, made its world premiere at the Tribeca Film Festival in New York. “We are in no way looking to 'let the city' burn, this is about saving lives and money,” Austin said, according to a report Tuesday by NBC station WDIV in Detroit. Max Ortiz / The Detroit News via AP file Watch US News crime videos on msnbc.com. Detroit's top fire official, Don Austin, is resigning in wake of botched fire crisis. Detroit Fire Commissioner Don Austin, who botched the hiring of new firefighters, regularly conceals the severity of the fire crisis and oversaw drastic budget reductions, is resigning at the end of the year, city officials said today. 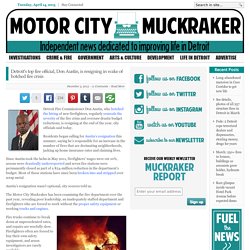 Residents began calling for Austin’s resignation this summer, saying he’s responsible for an increase in the number of fires that are decimating neighborhoods, jacking up home insurance rates and claiming lives. Since Austin took the helm in May 2011, firefighters’ wages were cut 10%, arsons were drastically underreported and seven fire stations were permanently closed as part of a $24-million reduction in the department’s budget. Most of those stations have since been broken into and stripped over scrap metal. Austin’s resignation wasn’t optional, city sources told us. Fire trucks continue to break down at unprecedented rates, and repairs are woefully slow. The city averages 30 fires a day, about half of which are suspected arsons. Steve Neavling. Hundreds of Fires Light Up Devil's Night in Detroit. DETROIT, Oct. 31— Hundreds of fires were set in the city and suburbs on Sunday despite official efforts to discourage young people from the arson that has become associated here with Devil's Night, the night before Halloween. 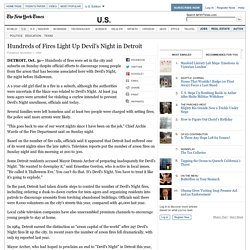 A 1-year-old girl died in a fire in a suburb, although the authorities were uncertain if the blaze was related to Devil's Night. At least 314 teen-agers were arrested for violating a curfew intended to prevent Devil's Night unruliness, officials said today. Several families were left homeless and at least two people were charged with setting fires; the police said more arrests were likely. "This goes back to one of our worst nights since I have been on the job," Chief Archie Warde of the Fire Department said on Sunday night. Deadly blazes, frigid temps pose double dangers for Detroit firefighters. Way past dark last Monday in Detroit, the temperature was at a cruel 4 above zero when fire began devouring a two-family flat on the city's west side. 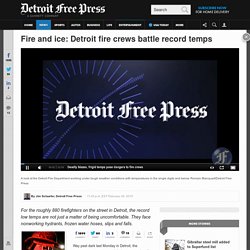 Elsewhere, most people of the metro area remained blissfully ignorant, some snuggled into warm beds. Dan Schaecher was not one of them. Schaecher, a 40-year-old Detroit firefighter, stood with two other firemen at the scene of this burning house on Monica Street, doing his job while a frigid mist floated down onto him from above. Soon, the condensation would encase Schaecher — head to toe — in ice. The windchill at that time was far below zero. 1 of 15 Autoplay Show Thumbnails Show Captions "Most times we're inside" a burning building, Schaecher would later explain. Not on this night. That's why Schaecher stood in the driveway outside the burning home, helping two other men direct a protective spray on the neighboring house to the north. 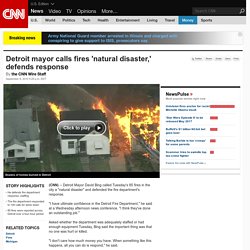 "I have ultimate confidence in the Detroit Fire Department," he said at a Wednesday afternoon news conference. "I think they've done an outstanding job. " Asked whether the department was adequately staffed or had enough equipment Tuesday, Bing said the important thing was that no one was hurt or killed. "I don't care how much money you have.

Fire Commissioner James Mack Jr. said the department is budgeted for about 500 firefighters, about 20 fewer positions than last year. The inferno was a perfect storm, and was aggravated by high winds and downed power lines, the officials said. Monday morning quarterbacking of resources is always easy to do, Mack said.