Health Information for Travelers to Guatemala - Traveler view. If you are not feeling well after your trip, you may need to see a doctor. 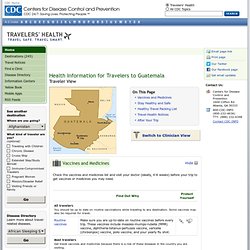 If you need help finding a travel medicine specialist, see Find a Clinic. Be sure to tell your doctor about your travel, including where you went and what you did on your trip. Also tell your doctor if you were bitten or scratched by an animal while traveling. If your doctor prescribed antimalarial medicine for your trip, keep taking the rest of your pills after you return home. If you stop taking your medicine too soon, you could still get sick. Malaria is always a serious disease and may be a deadly illness. Health Information for Travelers to Honduras - Traveler view. If you are not feeling well after your trip, you may need to see a doctor. 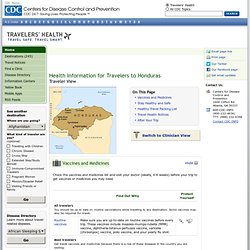 If you need help finding a travel medicine specialist, see Find a Clinic. Be sure to tell your doctor about your travel, including where you went and what you did on your trip. Also tell your doctor if you were bitten or scratched by an animal while traveling. If your doctor prescribed antimalarial medicine for your trip, keep taking the rest of your pills after you return home. San Pedro Sula, Honduras to La Aurora International Airport. Proposed Itinerary. GTQ/USD) Guatemalan Quetzal to US Dollar Rate. Honduras travel guide. Honduras [1] is the second biggest country in Central America. 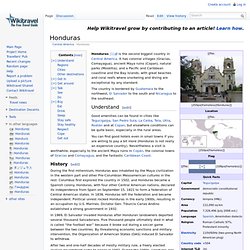 It has colonial villages (Gracias, Comayagua), ancient Maya ruins (Copan), natural parks (Moskitia), and a Pacific and Caribbean coastline and the Bay Islands, with great beaches and coral reefs where snorkeling and diving are exceptional by any standard. The country is bordered by Guatemala to the northwest, El Salvador to the south and Nicaragua to the southeast. Understand[edit] Category Archive. 15% de Descuento en Empresa Hedman Alas! 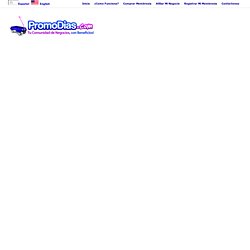 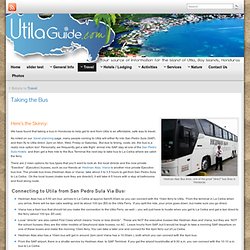 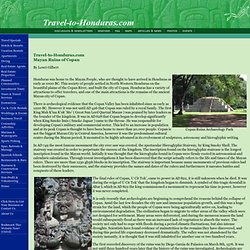 This society of people settled in North Western Honduras on the beautiful plains of the Copan River, and built the city of Copan. Honduras has a variety of attractions to offer travelers, and one of the main attractions is the remains of the ancient Mayan city of Copan. There is archeological evidence that the Copan Valley has been inhabited since as early as 1200 BC. However it was not until AD 426 that Copan was ruled by a royal family. In AD 749 the most famous monument the city ever saw was erected, the spectacular Hieroglyphic Stairway, by King Smoky Shell.

The final ruler of Copan, U Cit Tok', came to power in AD 822, it is still unknown when he died. It is only recently that archeologists are beginning to comprehend the reasons behind the collapse of Copan. The first recorded discovery of the ruins was by Diego Garcia de Palacios on March 8th, 1576. Hotel-Hostal Berakah (Copan, Honduras) - Guest house Reviews. 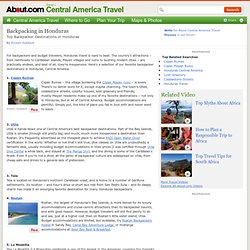 The country's attractions – from rainforests to Caribbean islands, Mayan villages and ruins to bustling modern cities – are practically endless, and best of all, they're inexpensive. Here's a selection of our favorite backpacker destinations in Honduras, Central America. 1. Copan Ruinas Kirsten Hubbard Copan Ruinas – the village bordering the Copan Mayan ruins – is lovely. 2.

Ashley Hillier. What do these numbers mean? 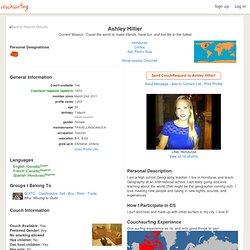 This summary is not a replacement for reading references; it's a quick summary to help you get started. At a glance, you can see how many references a member has, and how many of them are positive, neutral, and negative. In the second line, you'll see how many references came from people who hosted this member, surfed with them, and traveled with them. These numbers won't always add up to the total: some references are not categorized, and some may be categorized as more than one thing. Matt Howell. Ben notes honduras. Guatemala travel guide. Guatemala [1] is a country in the Central America region of North America. 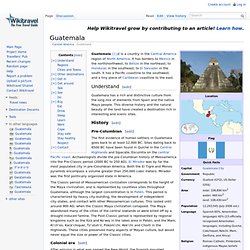 It has borders to Mexico in the north/northwest, to Belize in the northeast, to Honduras in the southeast, to El Salvador in the south. It has a Pacific coastline to the southwest, and a tiny piece of Caribbean coastline to the east. Understand[edit] Guatemala has a rich and distinctive culture from the long mix of elements from Spain and the native Maya people. This diverse history and the natural beauty of the land have created a destination rich in interesting and scenic sites.

History[edit] Pre-Columbian[edit] The Classic period of Mesoamerican civilization corresponds to the height of the Maya civilization, and is represented by countless sites throughout Guatemala, although the largest concentration is in Petén. Colonial era[edit] Tikal, Travel to Tikal National Park in Guatemala, general info on Tikal tours, transportation to Tikal, Tikal hotels, flights to Tikal from Belize, Cancun and Guatemala to enjoy Tikal at its best and explore other ancient Maya sites.

Lake Atitlan Tourism: 43 Things to Do in Lake Atitlan, Guatemala. Rio Dulce Guatemala: Top Vacation and Retirement Location. One of dozens of docks and marinas at Rio Dulce, Guatemala “In a few moments we entered the Rio Dulce. 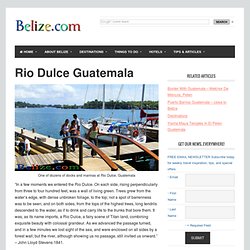 This is a two story house, Las Terrazas on top and la Casa de La Torre on the bottom. The house is available for partial or total rent and the rooms can be rented out separately. Price: Las Terrazas $44 double/$88 four persons | La Casa de la Torre $44 double/$88 four persons All Taxes Included. Options for places to stay in Guatemala. Odra Lemus. Guatemala Backpacker Destinations. Guatemala is one of Latin American's best destinations for backpackers, hands-down. Prices are often startlingly cheap, getting around is relatively easy -- if you don't mind a few bumps in the road -- and the country's beauty is unsurpassed. Truly, some of the most gorgeous landscapes I've ever beheld have been in Guatemala. Sinchi Runa » » Ayahuasca Ceremony in Tikal. Sanango , Izabal, Guatemala Since I arrived to Guatemala, I knew on an unconscious level that it was an opportunity that could provide me an understanding of the human soul and the cosmos.

I knew that it would change many of the concepts that I came with and that it would help understand my force or essence. The contradiction of a small country that has a dramatic disconnection from the world, as well as unjust structural conditions, is a good energetic blend for human understanding. Rooms. Finca Ixobel - Hotel Ecológico - Finca Ixobel is located on the outskirts of the town of POPTUN at KM marker number 376 in the northern Department (state) of PETEN between Rio Dulce and Santa Elena, Flores and the ruins of Tikal. If you are coming from the north or Tikal, Santa Elena and Flores you can hop on a mini bus from the Santa Elena bus depot. Mini buses leave every fifteen minutes.

Tell the minibus driver you are going to Finca Ixobel and he will drop you off at our doorstep. Semuc Champey: Guatemala's Next Big Attraction.